OAMU – A FIELD MANUAL ON ORGANIZING A MASS UPRISING III

An activist group is not likely to be successful unless a sufficient number of members are able to work together to plan, discuss problems, and make decisions about solutions. These activities are difficult and it’s easy to go wrong.

SNCC had a way of conducting meetings that they valued very highly, championed for the local activists, and guarded zealously against change. It came to be called “participatory democracy,” although they did not use the term themselves.

Unfortunately, if you google on the term you’ll find a lot of material that’s probably not very useful. A recommended book on the subject is Freedom is an Endless Meeting, by Francesca Polletta, a professor at the University of California, Irvine.

The book is very academic and dense, so you might feel like you’re dragging yourself through it, but there’s probably no better resource. Here are the main principles of participatory democracy, taken from Polletta’s book and from the writings and interviews of SNCC people:

Solidary Benefits: Participatory democracy builds solidarity. Due to the requirement for consensus, participants bought into the group’s decision. They “owned” it and no one felt left out. This band-of-brothers mentality is very important for an organization that challenges powerful interests.

If your group’s game plan calls for someone to make a speech at 2:00 on a college campus and sound equipment is needed, the sound equipment has to be there at 2:00. Not 2:15 or 3:00. And it has to work. If the sound people are not totally on board they might become careless. With the requirement for consensus, no one wants to risk letting the group down because everyone has a stake in the success of the group.

Participatory democracy builds respect for others whose viewpoints might be different. Participants are responsible for encouraging marginalized people, who might have a following among the rank-and-file, to come in from the periphery.

In meetings, edgy speakers try to make their case clearly while listeners try to understand it. This is important in a mass uprising because the people on the edge are more valuable participating in the struggle than alienated from it.  People whose ideas differ from the majority should not be too quickly dismissed as “idiots.”

Innovatory Benefits: Two heads are better than one. As in Skunkworks and other forms of industrial innovation, great results come when participants provide a flood of ideas and everyone feels free to discuss them.

The volume and diversity of the input reveals hidden hazards, suggests contingency plans, ties up loose ends, and reduces uncertainty. To some extent, the process compensates for a lack of expertise in the subject matter.

It’s not all free-flowing fantasy. Participatory democracy, as practiced by SNCC, leads to a style of discussion that is very rigorous and analytical, in which opinions and proposals are very carefully vetted. This too is an essential part of the innovation process.

Remember the famous photograph of the three activists sitting at a whites-only Woolworth lunch counter in Greensboro, North Carolina (Feb. 1, 1960) while bystanders poured sugar, ketchup, and other condiments on their heads? 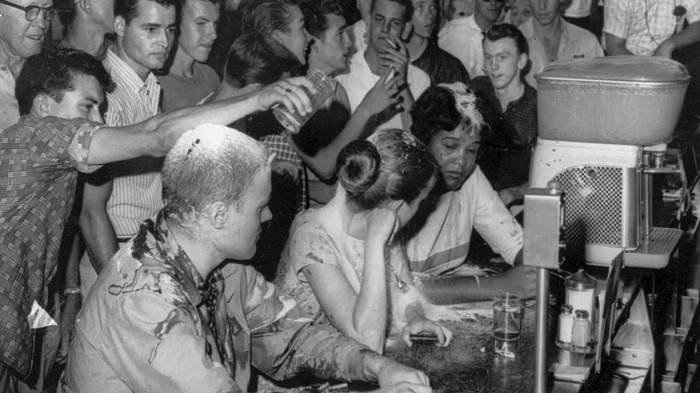 Even a well-known tactic like the lunch counter sit-in may have to be considered in an innovative way. Research has shown that diversity makes for greater innovation. When we hear “diversity” we usually think of a mixture of races, genders, social classes, which are categories that describe what we are.

Developmental Benefits: Participatory democracy teaches participants to articulate what they want and present a persuasive case for it by evaluating the costs and benefits of their preferred choices.

It also builds the skill of negotiating the agendas of others tohelp the group decide whether to accept one agenda over the others or innovatively combine the various agendas into a result acceptable to everyone.

We have been talking as though everyone who will be affected by a decision are present in the discussion. In fact, many of the people involved in the uprising will probably not attend leadership meetings in which problems are solved and decisions made. Many will simply want to be told what to do.

The leaders who do attend would be responsible for conveying the main decisions to the rank-and-file, at least to those who ask about what was decided, and the rigor of participatory democracy helps prepare leaders for this task.

Si Kahn, author of Creative Community Organizing, described his work with SNCC in Forrest City, Arkansas in 1965. He was impressed.

As he questioned SNCC people about the rationale behind the tactics he was asked to help with, he found that the explanations given to him by the SNCC people were fluent, clear, and persuasive. The SNCC people knew what they were talking about, probably a result of their actively participating in lengthy discussions when the tactical game plan was being developed.

SNCC people were very easy to understand. The same skills would be helpful when the leaders of an uprising sit down with legislators to explain the political agenda they want to become enacted.

The Need for Consensus. Despite these claimed benefits of participatory democracy, your local activist organization might still feel that, because of the requirement for consensus, your discussion process is too cumbersome and slow, and not enough is being decided.

You might begin to consider an alternative, perhaps a board of decision-making directors. Or, perhaps decisions could be made by just one leader. If you become seduced by these alternatives, be aware that there is a trap.

As soon as you begin to inflict political pain on your adversaries, they will look for ways to take away your effectiveness. The fewer decision-makers you have, the easier it is for someone to gain influence with them, and thus influence over your organization. Perhaps your directors will receive“ an offer they can’t refuse.”

If your organization makes decisions by majority vote, each such decision will create losers. Those on the losing side might subsequently spend more time thinking about improving their political position rather than about solving problems and making better decisions.

If in addition the losers think they are not being heard, the groundwork has been laid for political game-playing and even secession.

Another issue with majority decision making is that new people might be less likely to commit to an organization if they think others are not on board with what is supposedly a group’s decision.

Critics of participatory democracy often complain that activist groups become bogged down as they fail to find a consensus. These are very fundamental questions: is it always bad for the group to be bogged down? Is it always necessary to make a decision in order to avoid an impasse?  What are the reasons for the impasse? Could the group retrench and rethink the issues to achieve a better result?

One solution to gridlock is to ask the people who are most affected by a problem to decide what to do.

The discussion, although gridlocked, would still be useful by identifying the range of acceptable actions and the reasons why some actions are objectionable.

If you’re trying to produce a mass uprising you probably need good quality. Since you have little money, it needs to be cheap. So according to the principle something has to give, and that something is time.

Martha Prescod Norman, a SNCC staff member quoted by Cheryl Lynn Greenberg in her book, A Circle of Trust, put it this way:

“I’ve been to school a lot and I have never been in an environment that was as intellectually stimulating as SNCC. This fluidity and creativity along with the sense of trusting each other’s judgment is exactly what made us strong as young people and able to do so many things.”

Dale Woolridge has been a TTPer since 2004. He holds a scientifically-oriented Ph.D. in social psychology and has been a government manager and conservative political activist.