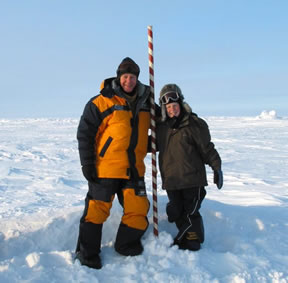 My youngest son Jackson and I will be making a trip to the North Pole this month. I started leading expeditions to the North Pole in 1978. This will be my 21st time to 90 North, the apex of the world. It will be Jackson’s 3rd. He’s 10 years old.

People often ask me: "Why in the world would you go to the North Pole so many times?" My stock answer is: "Because people keep paying me to take them there." But it is so much more than that.

Standing on the sea ice of the frozen Arctic Ocean, the center of millions of square miles of purest white, at the very top of our planet with the entire earth spinning underneath you, is the most extraordinarily magical experience. Every one I’ve ever taken there has told me that, just as they have told me they haven’t the faintest idea of how to explain this to friends back home.

I tell them that is the mark of a true adventure: It cannot be explained. To understand it, it must be experienced. This is why a 10 year-old boy can hardly wait to stand on top of our planet once again — and why I can’t either.

We’ll be pretty much cut off from the world for just over a week. By that time, by the time Jackson and I get back from the Pole, the dust will have settled from the inevitable short term chaos in Baghdad, and the rebuilding process will begin, starting with the establishment of a new and free Iraqi government.

You read my "Prouder Than Ever" piece; you’ve heard the British General praise the "dexterity, audacity, and sheer brilliance" of the American military. This is a wonderful time to be an American — or a Brit or Aussie. This is not just a military triumph. It is a moral triumph. All Americans, British, and Australians can take pride not just in the military courage and competence of their soldiers, but in the moral courage, the moral competence, of George Bush, Tony Blair, and John Howard. Western Civilization is fortunate to have them at its helm.

One question I have right now, as I embark for the North, is: Will we have finally figured it out about Saddam by the time I return?

After the second strike of April 7 on Saddam — the four JDAMs dropped by the B-1 on the Baghdad restaurant — a number of friends asked me if I should make a correction to my "Doornail Dead" piece, which seemed to clearly imply we nailed him in the first strike on March 19.

Here’s what bugs me about this. We hear endless hype on the media about how the CIA had such good and positive intel that Saddam was in the restaurant. But that is the very same thing they claimed regarding the first strike on March 19. Why wasn’t the intel for the first strike just as good as for the second?

Over and over again after March 19, the CIA assured everyone in the media that they nailed him, that he was in the building, that if he wasn’t killed he was at the very least severely injured.

Now all of a sudden that is forgotten, and he is OK enough to stroll into a restaurant in broad daylight with his two kids. Sorry — I’m not buying it.

I still think we got him the first time. Every single tape of his since has been phony — especially that ridiculous farce of him on the streets of Baghdad surrounded by a small clutch of lackey clowns. Arnaud de Borchgrave, who has interviewed Saddam three times and knows him better than the crew-cut boys at Langley, is positive that the fellow in that tape is not Saddam. Further, a host of factors — weather, clothing, the buildings in the background, etc, — show that the tape was shot much earlier than March 19.

The Doornail Bottom Line remains the same: It is just too easy to provide solid proof that someone — anyone — is still alive. If all the proof that is offered is patently phony, then it is reasonable to assume that someone is not alive.

Why Centcom blew this restaurant to smithereens is thus a mystery. The obliteration is so complete that the remains of anyone in there is thoroughly mixed up with the rest of the rubble, and no solid identification will be possible. Perhaps it was done to give folks an overwhelmingly visible reason for believing Saddam is dead at last. Remember we never saw any video of the building or bunker hit on March 19.

Or perhaps we missed one or both of Saddam’s evil sons on March 19, and we went after them on April 7. They — but not the father — might indeed have the stupid hubris to meet in a restaurant in broad daylight.

At any rate, as Ollie North reported from the Marine division with whom he’s embedded, the Marines he’s with don’t buy the story. I’ve known Ollie for 20 years — and he and his Marines are on the money here.

Yet the conclusion remains the same: Saddam is history. What is vital now — vital for shutting down the remaining suicidal Iraqi nutcases still fighting against us — is that the people of Iraq believe the monster is dead and gone. Evidently, the April 7 Restaurant Raid was conducted to encourage that belief.

I want to wish you all a Happy Easter and Passover. Amidst egg hunts and matzos distribution, take time to celebrate being a member and participant of Western Civilization. The triumph over monstrous evil that is taking place in Iraq is a moral victory for us all.