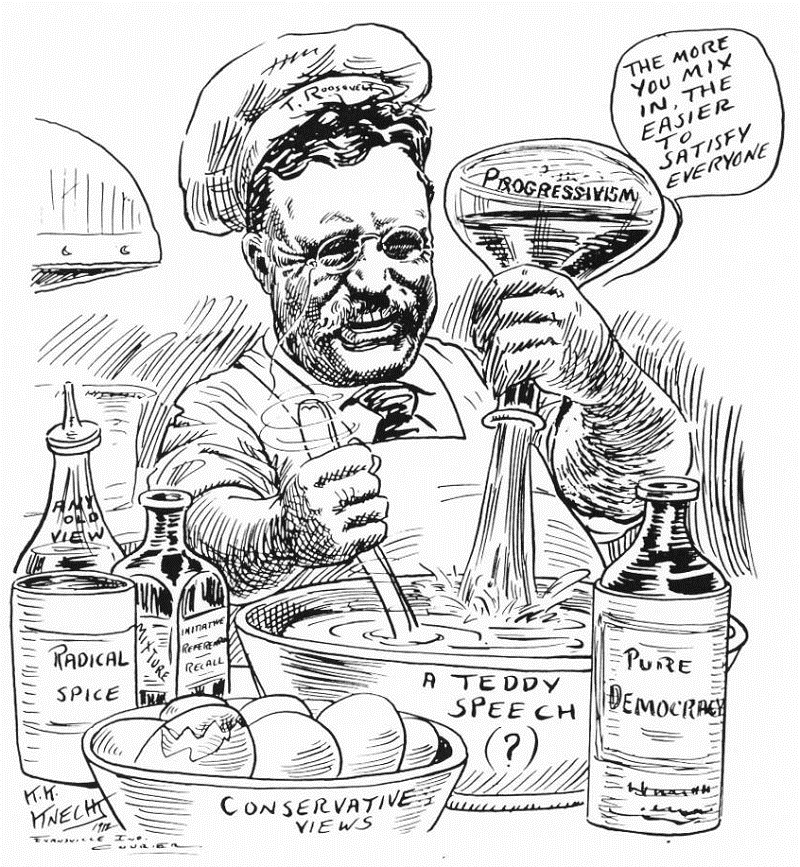 On Saturday (1/23), WaPo joined in spreading the rumor that POTUS was going to start a third political party:

“In recent weeks, Trump has entertained the idea of creating a third party, called the Patriot Party, and instructed his aides to prepare election challenges to lawmakers who crossed him in the final weeks in office.”

This is the most catastrophically bad idea in over 100 years.

In 1912, Teddy Roosevelt – who had been president for eight years (1901-1909) – had turned left so much he challenged his successor, incumbent President William Howard Taft for the GOP nomination.  He failed badly.  In spiteful revenge, he promptly formed a third party called the Progressive Party – known to history as the Bull Moose Party after TR’s nickname.

Meanwhile, the Democrats could not choose a nominee.  Their convention delegates cast vote after vote among over a half-dozen candidates to no avail.  Finally, on the 46th ballot they settled on an obscure academic who had just been elected governor of New Jersey the year before – Woodrow Wilson.

Together, TR and Taft won over 50% of the vote, and Wilson less than 42% — but their votes were split between them so much that Wilson won 425 electoral votes.  Thanks to TR’s narcissistic lunacy of his third party, America – and the world – suffered a catastrophic horror presidency.

In Wilson’s first year (1913), he oversaw the ratification of the 16th Amendment, making an income tax and the IRS constitutional; and the 17th Amendment, ending the Founders’ purpose of Senators being the representatives of the state legislatures with direct elections instead; plus the creation of the Federal Reserve, for which there is no enumerated power constitutional authority.

It is with very good reason that Jonah Goldberg in Liberal Fascism accurately describes Woodrow Wilson as “The 20th century’s first fascist dictator.”  Eager for the “moral tonic of war,” he got us into World War I after promising not to, which killed 117,000 American soldiers for the purpose of England ruining Germany in victory so badly it set the stage for Hitler and World War II – oh, and prolonged the war enabling Lenin’s Communists to overthrow Russia and create the Soviet Union.

He realizes splitting the Anti-FPX vote between him and a GOP candidate would ensure FPX’s reelection, and cement Dem control of House & Senate for who knows how long.  Rather than create a destructive third wheel, he knows it’s vastly easier to engineer a hostile takeover of an existing fully functional enterprise.

POTUS has told his DNI Ric Grennell, among others, that he definitely will run again in 2024.  And as the candidate of the GOP dedicated to flushing out the RINOs.  (As an aside, right now the smart money is on Florida’s Gov. Ron DeSantis to be his running mate – odds that it will be Pence again are precisely zero.)

So Trumpers need to forget about the really bad idea of a Patriot Party, and join PDJT in making the GOP a real patriot party from the inside out.