NO FEAR OF THE EVIL EYE – Envy and Shrunken Heads

After the Preface and Introduction (posted last week), the book is divided into three parts: I – Envy, II – The Fear of Being Envied, III – The Key to Freedom, Peace, and Prosperity.  Here this week is the first chapter of Part I.  I so very much appreciate the fascinating and insightful comments on the Forum for the Preface/Intro.  Keep them coming!  This is work in progress and they are very helpful to me in better explaining the concepts involved.  Thank you! 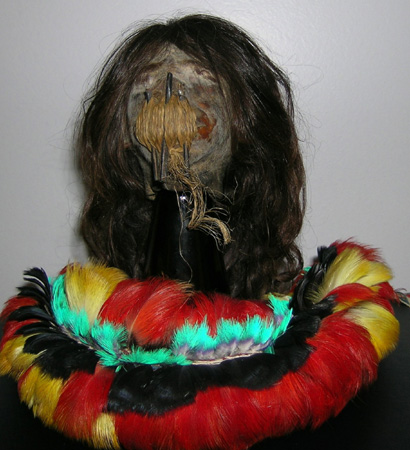 This is a human shrunken head.  It was given to me by the man who made it, the curaka or chief of a clan of Jivaro headhunters in the Amazon.  His name was Tangamashi.

The Jivaro were the first tribe I stayed with.  I was 16 years old, soon to be a freshman student at UCLA as an anthropology major.  There are many tribes around the world who are “headhunters” from the Amazon to Africa to New Guinea and elsewhere, but they all collect the skull of an enemy they kill.  Only one tribe on earth shrinks an enemy’s head – actually the head skin – and that was the Jivaro.

They live in the Amazon jungles of southern Ecuador and northern Peru. Shrunken heads were fascinating to a 16 year-old boy, but more so to me was the Jivaro determination to be unconquered and free.

When the Incas invaded their territory trying to enslave and incorporate them into their Inca Empire in the late 1400s-early 1500s, the Jivaro slaughtered them into humiliating retreat.

When the Spanish Conquistadors began replacing the Inca Empire with an empire of their own in the mid-1500s, they made the same mistake of trying to enslave the Jivaro to grow crops and mine gold for settlers.  In 1599, a Jivaro curaka named Quirruba led a revolt that took thousands of Spanish heads.  The Spaniards left the Jivaro alone for over 300 years.

So I arrived in Jivaro territory in the summer of 1960 – a young teenager from Glendale, California who had never been anywhere in the world except once on a trip to Europe with his parents.  I was by myself, and how I talked my mom and dad into letting me do this is another story.  In any regard, Tangamashi and I bonded, and by the end of the summer he adopted me into his people.

We went blowgunning for monkeys (while dodging angry monkeys urinating on you), drank natema for entry into the Jivaro hallucinatory spirit world (tea made from the Banisteriopsis vine known elsewhere as ayahuasca), and learned how the Jivaro look upon the world.

Through my translator, the son of a doctor studying their medicinal plants who was born and raised among the Jivaro, Tangamashi explained that while the outside world knows them as Jivaro, they call themselves Shuar, meaning simply “people” in Jivaroan.  Then he explained how and why they make tsantsas.

When an enemy is killed in battle, his head is taken via a machete and skinned. The head skin is sewn up and hot sand stuffed in the cavity, drawing out all the moisture and oils until it is dried and shrunken.

For some time before this process, the head-taker has studied his trophy’s facial features, so that as the tsantsa dries and becomes plastic, it can be shaped to look like its owner when alive. This is done so that the spirit of the man killed will recognize his home when a ceremony is held at the head-taker’s village, the tsantsa placed on a pole, and its spirit called in from the forest.

The uvisheen or shaman does the calling for the spirit to enter his home — his head — then traps it inside by sewing up the lips. By trapping the spirit inside a head shrunken in size, the spirit’s power to do malevolent magic is equally shrunken and is incapacitated.  The uvisheen explains to the spirit that he is now a member of his new family, to which no harm must come.  The tsantsa is then placed in a palm leaf basket and tucked into the rafters of the family thatch hut.

Tangamashi glanced up and I could see four of these baskets above.  I refrained from asking that if the spirit, which entered through the tsantsa’s lips, can’t escape through the lips which are sewn up, and since the tstantsa is hollow inside, why can’t it escape through the open neck hole.  Best to keep quiet on that.

Okay, that was the how.  The question of why took me longer to figure out.  Finally it dawned on me that the Jivaro have no concept of natural death.  When someone dies, something or somebody killed him or her.  Death to a Jivaro is always murder.

There are three kinds.  What we would call accidental death – drowning in a river, a snake bite, crushed by a falling tree – is demon murder, caused by a malevolent spirit in the spirit-world.

What we would call medical death, say a heart attack, or before modern medicine, unexplained death – is sorcery murder, caused by the uvisheen of an enemy clan sending a tsentsak, a magic dart to the victim so he will die.

Then there’s real murder, of course, like death by a spear in the stomach. While demon murder can’t be avenged, the other two must be.  Unless the killer is known via a witness in a real murder, the uvisheen must divine in a natema vision who it is.  Then a tsantsa murder raid is conducted upon the killer’s clan.

Okay, there are no courts in the jungle, the desire for justice and revenge is universal, and this was how the Jivaro did it – all the nonsense about magic darts and hallucinations telling the truth aside.  I didn’t know how to go deeper than that – and besides, Tangamashi was becoming my friend.

Author at age 16 in 1960 with Tangamashi ©Jack Wheeler

I was learning that a headhunter in the Amazon could be as admirable as anyone else, act with honesty and integrity, look you straight in the eye and tell you what he really thought. Whose people had the courage to fight to be free for centuries. And when a man like that teaches you how to blowgun monkeys with real curare-dipped poison darts (no tsentsaks) – well, how cool can you get when you’re 16?

It was not until a few years later that I understood that the Jivaro belief of all death being murder by black magic of some kind was based on their fear of envy.  It was a revelation to me that sorcery, “black magic,” voodoo, were anywhere and everywhere acts of malicious envy.

The Jivaros, I came to understand, are like most tribal and traditional cultures, live in constant fear of the magical aggression of others. They attribute all unfortunate events to the malicious, envious black magic of another Jivaro.

Then came the real revelation – that this same belief in voodoo black magic as the cause of misfortune is the basis for much of what is taught in today’s universities as the progressive vanguard of sophisticated contemporary thought on economics and social science.