NO FEAR OF THE EVIL EYE: Envy and Black Magic

Fifth installment: Chapter Five of Part I: Envy.  Your Forum comments are very helpful – and interesting!

It took me a year to get the book – the American edition finally came out in 1970.[1]  I immediately recognized it was a work of prodigious scholarship encyclopedic in scope.  Schoeck’s research of anthropological field studies of traditional cultures across the globe was exhaustive.

I learned that the Jivaro belief that death is always murder was in no way unique – a lack of the concept of natural death, that death was always malevolently perpetrated by demons, sorcery, or physically for real, was prevalent among the majority of traditional cultures, whether in the Amazon, Africa, or the Pacific.

It’s commonly understood that the lives of people in traditional or peasant societies everywhere is suffused with superstition.  The world for them is teeming with demons, spirits, ghosts and gods, all of whom are malicious, dangerous, and must be placated.

But why are they so malicious?  Why are they out to get us, instead of being on our side?  Why do they have to be constantly appeased?

Tibetan Buddhism is an amalgam of Bön, the ancient animist religion of Tibetans, and the teachings of Padmasambhava, the monk who introduced Buddhism to Tibet in the 700s AD and translated Buddhist scriptures into Tibetan.

The most traditional Tibetan culture on earth today is that of the Kingdom of Lo, independent since the 1300s, and presently in the remote region of Upper Mustang in Nepal on the border of Chinese Tibet.  While Tibetan culture has been destroyed by the colonial communism of China, it still flourishes in Lo like nowhere else.

In late Spring, the most important religious ceremony of the year is performed in the palace courtyard of the walled capital of Lo Manthang.  It is called Tiji – a Tibetan abbreviation for “Chasing of the Demons” – the purpose of which is to protect the spring harvest from the hungry and evil spirits who would gobble it up for themselves.

Here is a High Lama placating two of the evil spirits with ritual food so they will go away. 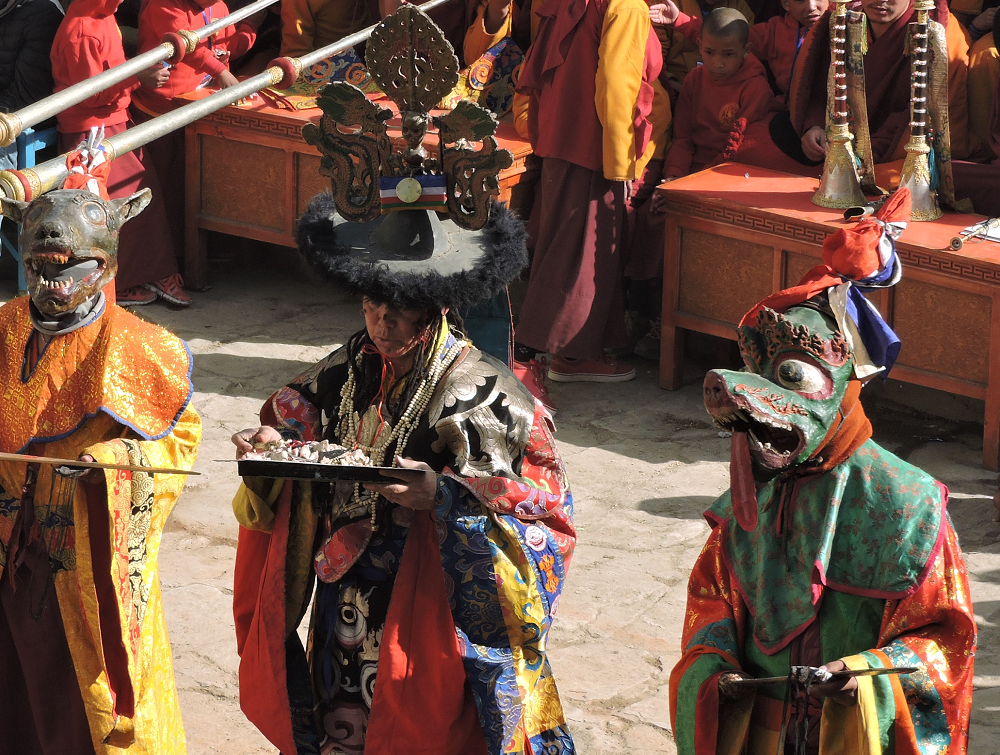 The Tiji ceremony attracts visitors from around the world, who trek for a week getting there to be entranced by the spectacularly exotic ceremony.  Yet for the Lo-pa (the Tibetan people of Lo) it is extremely serious business.  If not appropriately placated by the ritual, the demons would destroy their buckwheat and barley harvests, without which they would starve.

Helmut Schoeck never knew about the Kingdom of Lo and the Tiji ceremony – Lo was forbidden to foreigners until 1992 and he passed on early the next year – but he would recognize it immediately as among the innumerable examples of cultures attempting to appease maliciously envious “demons” – figments of imagination.

But if “demons” don’t really exist, what are they figments of?  Why, to apply this to ourselves, do we have a habit of “knocking on wood” if we are so bold as to express satisfaction with our lives?  This is a vestige of the ancient fear of the envy of spirits or gods for our happiness – which is in fact the reified envy of other real people.

“Reification” is the logical fallacy of believing an abstraction – something that exists only in one’s mind, a psychological entity – is something that actually exists in the real world.  An ultimate expression of this is Plato with his World of Forms, that Aristotle came to understand made nonsense of much of his philosophy.

What Schoeck did understand – because so many anthropologists gave repeated examples – is that the world of fear of malicious supernatural entities so many cultures live in is the reified fear of the envy of their neighbors.

Famed anthropologist Clyde Kluckhohn documented the ubiquity of sorcerers who practice black magic among the Navaho of the US Southwest.  They become sorcerers, he learned, “to wreak vengeance, to injure wantonly, motivated by envy.”

Equally famed E.E Evans-Pritchard documented the same among the Azande who live in the forests where (now) South Sudan, Central African Republic, and DR Congo come together.  He repeatedly describes the “constant preoccupation of the Azande with mangu, the envious black magic of others.”

Over and over again, anthropological field studies demonstrate that, like the Navaho and Azande, the Tiv in Nigeria, the Aritama in Colombia, the Dobua in Micronesia, the tribal mind in general attributes any illness or misfortune to the envious black magic of a personal enemy.

And then came Schoeck’s great revelation that turned a light bulb on in my mind shining a spotlight of understanding upon so much modern intellectual thought.  I am hoping this quote of his will do the same to you:

“A self-pitying inclination to contemplate another’s superiority or advantages, combined with a vague belief in his being the cause of one’s own deprivation, is also to be found among educated members of our modern societies who really ought to know better.

Our modern Western societies have no business whatever feeling themselves more advanced than Third World traditional cultures believing in witchcraft and voodoo – because the “intellectuals” of the Left, who teach in Ivy League Universities and write editorials in the New York Times are precisely the same.

Although they consider themselves to be in the progressive vanguard of sophisticated contemporary thought, their belief system is atavistic, a regression to a primitive tribal belief in Black Magic.

Take for example the primitive atavism of left-wing bromides like, “The rich get richer while the poor get poorer.” By the same logic, one can be healthy only at the expense of others.

That in order to be in superior health, bursting with energy and vitality, one has to make someone else sick or in poor health — just like in order to be rich you have to make others poor. The healthy are healthy because they unjustly exploited and ripped off the sick, spiriting away the sick’s “fair share” of health with black magic.

If this is absurd, then claiming the poor are poor because they have been exploited by the rich is equally so.

Absorbing this, I recalled a history professor at UCLA telling us that the world we live in here in the West is dominated by the theories and thinking of three individuals:  Darwin, Einstein, and Marx.

Darwin and Einstein of course, the evidence for both is monumental[2] . But why Marx?  Did his teachings have any explanatory, evidential, or predictive value?  What did he really say that so many intellectuals, teachers, writers, politicians and political activists found compelling?

I decided to find out, by studying what he and his intellectual partner Engels actually wrote.  Now you’re going to find out too – but brace yourself.  You’ll find it hard to comprehend that anyone could actually believe it.

We’ll start with a conversation I had with a young man in Africa, where I spent the summer of 1971.

[1] . The link at the end of the previous chapter is to the modern Kindle edition.  Here is the link to the original 1970 hardcover edition on which my quotes below are based.

[2] Darwin because of the enormous explanatory power of Darwinian evolution via natural/sexual selection and descent with modification.  Essentially everything we know about genetics and molecular biology demonstrates a common ancestry to all life, with a great deal of the essential details unchanged between bacteria, animals, and plants, such as a common genetic code in DNA.

From vestigial structures (like the human tail bone), to the genetic repurposing (or “exaptation”) of a pre-existing structure into a new uniquely adaptive structure (like dinosaur feathers initially to provide heat regulation repurposed for flight – yes, birds today evolved from being dinosaurs), Darwinian evolution makes sense of biology.  Without it, nothing makes sense in biology at all.

Nonetheless, in the Origin of Species Darwin placed the “Creator” as the initiator of life on earth.  The Sixth Edition of 1876 ends with these words: “There is grandeur in this [natural selection] view of life, with its several powers, having been originally breathed by the Creator into a few forms or into one; and that… from so simple a beginning endless forms most beautiful and most wonderful have been, and are being evolved.”

Einstein because, to take one of innumerable examples, of GPS navigation.  Time passes differently in inertial frames of differing velocity according to Special Relativity. The clocks of orbiting satellites tick at a different speed than those on Earth because of their differing velocities. Yet GPS technology needs to have clocks in perfect synch with those on Earth to allow them to nail down position to a precise degree.

The slight difference between satellite and earth clocks would cause errors of several parts per billion. This would be enough to make them useless for all modern purposes including aerial and submersible navigation and military operations. Einstein’s equations correct the difference, so that airplanes land on the runway and not 40 feet to the side.