NO FEAR OF THE EVIL EYE: Envious Rage as the Path to Fascist Power

ENVIOUS RAGE AS THE PATH TO FASCIST POWER

If there is one thing all those not on the Left politically are seriously sick and tired of, it’s the constant, unending, and ubiquitous anger of those on the Left.

If there is one word that should be banished from news headlines these days, it is outrage. Every day without fail now, you’ll see multiple headlines reporting on some lefty group being in a state of “outrage” over something that offends them.

Particularly funny are has-been Hollywood “celebrities” trying to regain some of their lost fame sounding off with obscenities and schoolyard insults, when their temper-tantrums are of no real concern to normal people.

All this stops being funny when the anger and outrage turns into violence or the threat of it.  I’ve never forgotten the first time it happened to me.

It was back in 1969 when I was a graduate student in philosophy at the University of Hawaii in Honolulu.  The campus was being tormented by left-wing student protests, and the UH Board of Regents agreed to hear their grievances, especially about “racism” on campus.

The meeting was held in a large auditorium with the Regents sitting on chairs on the stage being deluged by invective from the multitude of protestors in the audience.  I was sitting near the front, and finally I stood up to say, “Is it too much to ask to have a reasonable, calm discussion instead of all the angry yelling and shouting?”

In response, I heard behind me a woman’s voice explode in anger: “Is that one f***ing haole?”  Pronounced “how-lee,” it means white person in Hawaiian and is often simply descriptive – but when used as a racial insult it’s equivalent to the N-word.

I looked around to see a young local Hawaiian woman standing a few rows back staring at me with pure hatred.  My face broke out in an ear-to-ear smile and happily replied, “It sure is!”  Then I pointed an accusatory finger at her to say, “You know, you are the racist here, not me – you hate me for the color of my skin, I don’t hate you for yours.  What does someone’s skin have to do with what kind of person they are?”

Her friends on either side had to restrain her as she lunged at me, trying to climb over the seat rows between us. There was murder in her eyes.  Never before had I seen someone who wanted to kill me, actually kill me for real.  I looked at those holding her back and shook my head.  “So much hate,” I said with a sigh, and with my palms upraised asked, “and for what – for what?”

That’s the question, isn’t it:  For what?  For what is all the constant unrelenting torrent of anger on the Left?  Anger that wants to lash out, hurt, maim, ruin, destroy, shut down with force any dissent?  It’s such self-destructive soul-poison.

What makes any normal person feel such sadness and pity for those consumed with Kto-Kovo/Marxist-Nazi/ cancel-culture/identity-politics rage, anger, and hate is how masochistically stupid it is.

Not stupid as in low intelligence, but self-made, self-imposed stupid in allowing emotions to override the capacity to think clearly.  There is a term for this:  amygdala hijack.

Coined by neuropsychologist Dr. Daniel Goleman in his 1996 book, Emotional Intelligence: Why It Can Matter More Than IQ, it refers to the brain’s emotional processing center called the amygdala deep in the ancient brain structure of all mammals, the limbic system, which evolved over 200 million years ago.

As humans, our hominid ancestors slowly evolved our brain’s reasoning processing center, the prefrontal cortex, only over the last million years or so, with the capacity to fully reason only within the last 100,000 years or less.  It is this part of the brain that enables human self-consciousness.  We can think, reason, and be self-aware to such a qualitative degree it separates us from all other species of life on Earth.

Since the amygdala processes emotional reactions milliseconds faster than the prefrontal cortex processes reasoning and decision-making, it takes an active choice of self-awareness to choose reason over emotion.

This is, in fact, the locus of “free will” – the choice to think and decide rationally instead of letting your “feelings” (your amygdala) decide for you.

This is why children and teenagers are run by their emotions more than reason – because the brain doesn’t fully grow the prefrontal cortex until beyond age 20, while the amygdala has been there early on.

But what about adults who are the same?  Their prefrontal cortexes are fully grown.  What has happened to them?  How have they been programmed to have their amygdalas go wacko under certain conditions, like a child or teenager?

Dr. Goleman devotes much consideration on the causes of amygdala hijack, and overcoming it to achieve emotional intelligence – such as focus on one’s breathing and practicing “mindfulness” — the ability to focus our attention in the present moment and be fully aware of our thoughts, emotions, senses and surroundings.

What we’ll talk about here, however, is how Leftist leaders program their followers with amygdala hijack as their strategy to gain fascist power. I call it Infantilizomania.

Yes, I invented this term. You won’t find it in Webster’s, the OED, or Google. At least not now. Hopefully soon you will, as it becomes the accepted term for the neurosis with which all those on the Left are afflicted.

The compulsion to infantilize people is the neurotic compulsion of the Left.

Leftists of course do not call it infantilizomania. They call it compassion.

We can see the results of Leftist compassion in America’s inner cities: crime-ridden, drug-infested poverty pits inhabited by people rendered helpless to take responsibility for themselves.  It’s the modern form of the White Man’s Burden, and has destroyed, just obliterated, three to four generations of inner city poor in America.

It is a blatantly phony compassion. Compassion for the plight of others in difficult and desperate circumstances is a noble emotion. But it becomes fraudulent when you demand that your compassion be paid for with other people’s money. A Leftist’s compassion is a Ponzi scheme, robbing Peter through government taxation to pay for his compassion for Paul.

Most of all, Leftist compassion is rendered demeaning, patronizing, and un-noble by equating compassion with treating adults as if they were children.

There is a fundamental aspect to our human nature that allows the Left to get away with it. It’s called “neoteny.”

Neoteny is a biological and neurological process where a species retains juvenile traits into adulthood. Just as a dog is a neotenous wolf, so man is (among many other things) a neotenous ape.

Our neoteny accounts for many of the most distinctly attractive and lovable features we possess as adult human beings – such as our unbridled curiosity, our sense of humor and playfulness. Young apes, just as the young of many other species, are playful and curious – but not as adults.

The price of maturity for most all species except man (and those species bred by man to retain them, such as dogs bred to be adult puppies), is that such endearing traits as juvenile playfulness must go out the window.

But for everything there is a price.

One’s own parents cannot satisfy this need, because they cease being physically larger, dominant, and biologically protective when their children grow up. Communist dictatorships were and are well aware of this price of neoteny, with the Soviet omnipresence of gigantic statues of Lenin (which is especially funny as Lenin was five-foot-three, one inch shorter than Stalin).

There are giant statues of Mao, history’s greatest mass-murderer, built all over China today. 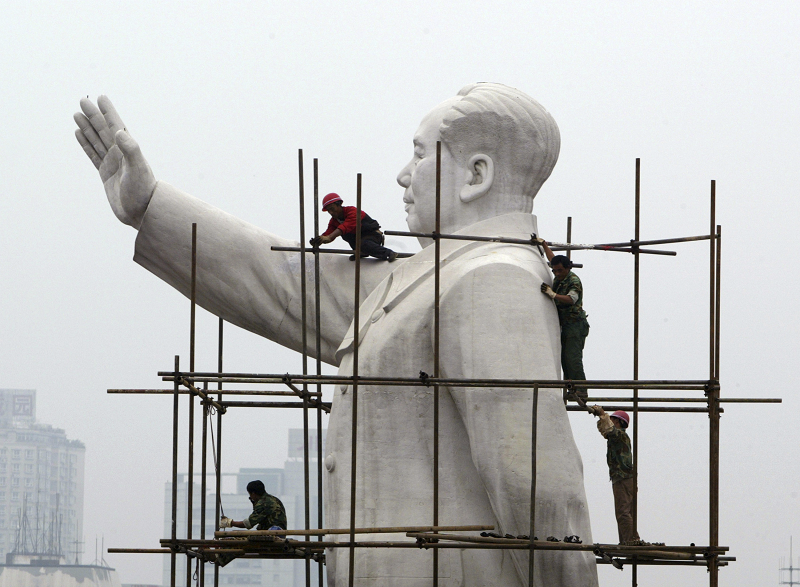 The purpose of such huge statues is to reduce adult subjects in a Communist country to the physical size and status of children who will obey their ruler-parents.

The Left’s’ path to power is to reduce adults to children through their phony claim of compassion. As French philosopher Pascal Bruckner points out, in order to look at grown adults as innocent, they must be infantilized. But by transforming real grown people into idealized innocent infants, leftist compassion becomes contempt.

In Bruckner’s book, Tears of the White Man: Compassion as Contempt , he observes how there can be “sadism in pity.” He requests that Leftists, those “prophets of guilty conscience,” those “martyrs of malediction,” abandon compassion as contempt, stop looking at inner city blacks, or “people of color,” as children, and accept them instead as adults capable of being responsible for their own happiness.

In his Temptation of Innocence: Living in the Age of Entitlement, Bruckner discusses the devastation wrought upon people whom the Left infantilize. Not only are they encouraged to think and behave as children, as infantilized victims, but to believe that their powerlessness is “a virtue without responsibility.”

Light Bulb City, yes?  Of course, the same Marxist-Nazi con of Kto-Kovo hatred, sucking people into feeling envious rage against those they are led to believe victimize them – the rich, the successful, the systemic racists, the white supremacists keeping them down with their insatiable greed, blah blah.

And what is the Kto-Kovo solution, the only solution for the victims’ helplessness?  Confiscate, expropriate, and steal (they all mean the same thing) by force the wealth and “privilege” of the evil victimizers. Ruin their lives, burn down their shops and homes, kill them – kill them all if they stand in the way.

Might Makes Right becomes “Social Justice.”  Fascist Rage is the holy means to the sacred goal of the freedom-less Nirvana of Communist Peace and Equality.

Arguably the most influential and widespread infantilizomaniacs throughout our society are academics, from college professors to elementary school teachers – even Kindergarten now.

The Snowflake Generation is the result, who get “triggered” by “microaggressions,” who need “safe spaces” from anything that offends them, who are taught that their being offended by something is a coherent argument against it. 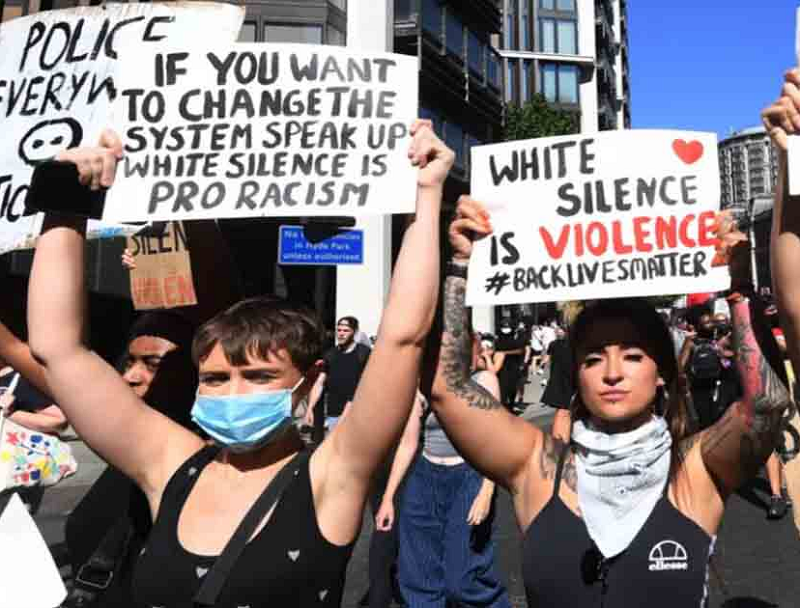 The painfully obvious consequence is the Burn-Loot-Murder fascist rage of BLM/Antifa – supported and encouraged by their teachers, the media, Big Social Tech, and Democrat politicians, professional infantilizomaniacs all.

Perhaps the most puzzling aspect of this is that while the current target of fascist rage is the alleged “systemic racism” of “white supremacists,” both those creating and perpetrating the rage are predominately white themselves.

The guys who run Big Tech like Zuckerberg and Dorsey are white.  The professors, the teachers, the editorial writers of the New York Times, the talking heads on CNN, the Democrats – Bidens, Schumers and Pelosis – are predominately white.

Their purpose in life, it seems, is inculcating a Nazi-like racist hatred for whites – which they are.  That is, they are auto-racist, racist towards themselves.  What could account for this?

What could account for so many members of the top echelon of American society being White Auto-Nazis?

In Part II of this book, we’ll attempt to solve the puzzle.