NEVER IN OUR LIFETIMES 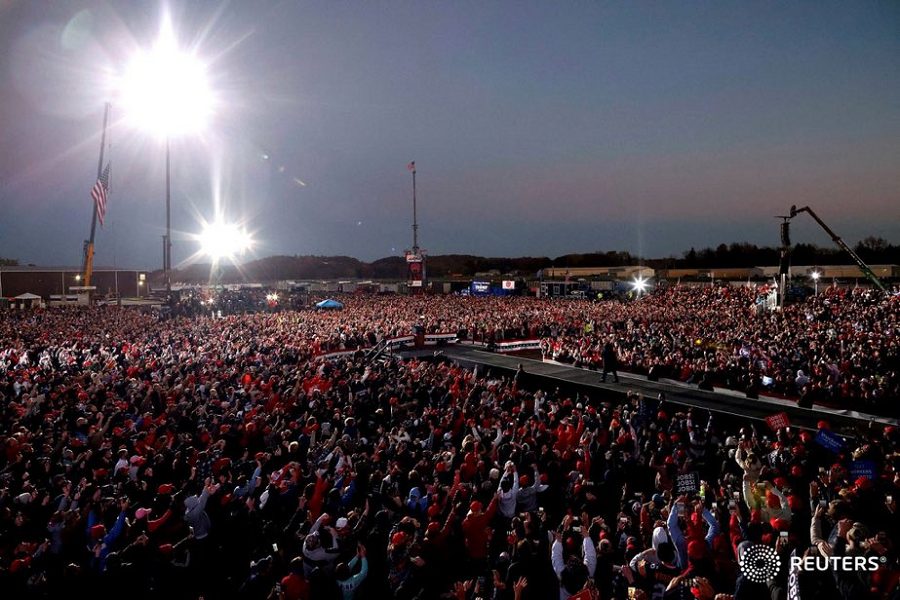 The picture you see is only part of the crowd of Trump supporters at Butler, Pennsylvania last Saturday evening – 57,000 or more by Secret Service estimate.

How terrifying is this to Democrats?  John Fetterman is the Dem Lt. Governor of Pennsylvania.  Here’s his message to get Dems to vote: 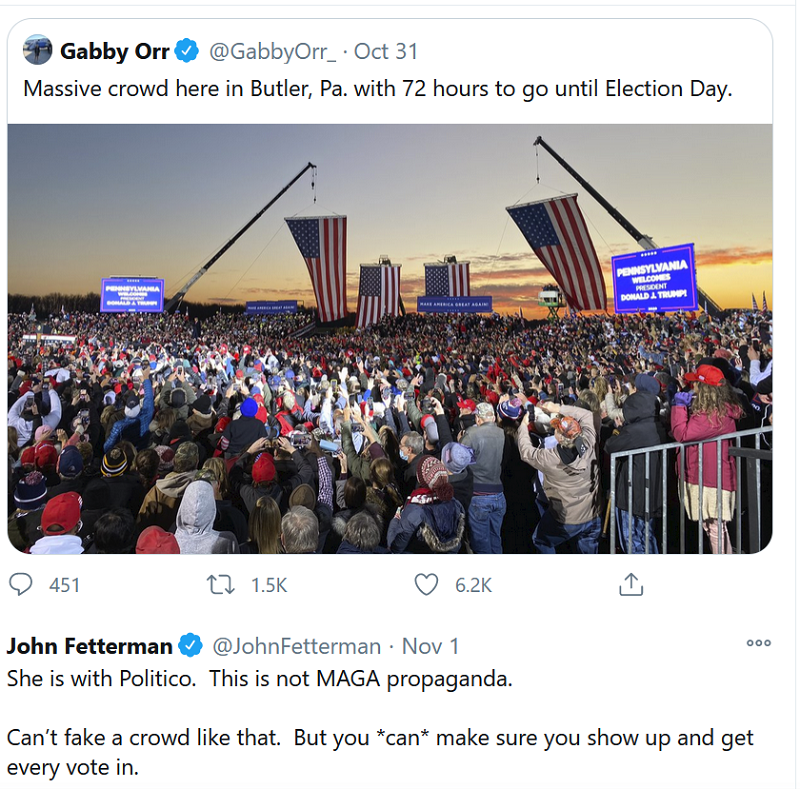 Can’t fake this either.  On Sunday October 25 there was a Trump Train car caravan outside Phoenix, Arizona.  It was 96 miles long. 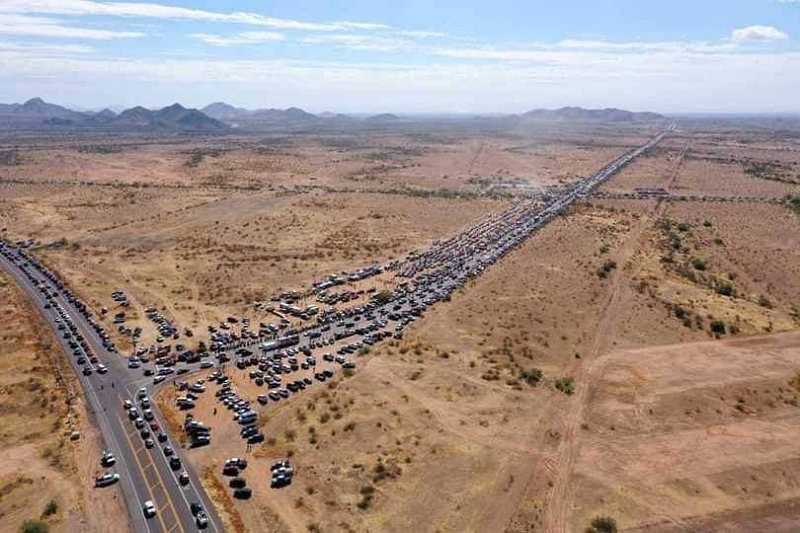 There has never ever in human history been such voluntary enthusiasm for a political candidate.  Never in our lifetimes have we seen anything remotely close to it and very likely never will again.  For this is happening all over our country and at every Trump rally.

Jon Karl of ABC News is in such awe of our POTUS he practically dubbed him “Captain Marvel.”

How the Fake News and the Fake Pollsters can maintain Basement Joe is still way ahead in their polls – the Real Clear Politics Poll Average today (11/02) is 51% Biden-44% Trump – is a matter for psychologists to figure out.

A far more reliable poll was released today (11/02) by the major British paper The Express conducted by the Discovery Institute, which predicts Trump’s loss in the popular vote and a Trump Electoral College landslide of 326-212.

“Trump’s voters are more evenly dispersed across the country than are Biden’s.  Biden will do incredibly well in the heavily populated states of California, Illinois, New Jersey, and New York, where he will rack up enormous margins of victory over Trump, providing him with a national popular vote victory, yet depriving him of sufficient votes elsewhere to secure Electoral College victory.”

This is supported by Trafalgar Group, the most accurate pollster now (only Trafalgar, for example, predicted Trump would carry Michigan in 2016).  Over the weekend they show Trump clearly ahead in Ohio, Michigan, North Carolina, Arizona, and Florida – and today (11/02) in Pennsylvania.

Their poll of Wisconsin is dated (10/25) showing dead even and should be updated by this evening.  POTUS is still slightly behind in Minnesota, but that was last week as well (10/28).  All in all, Trafalgar is showing a Trump Electoral Landslide, albeit not quite as large as the Express.

One reason is that voters recognize that POTUS is a man of action, he actually does real things in the real world to improve their lives – while Slow Joe is a man on non-action – what has he actually achieved for voters in 47 years in politics?

On Saturday, (10/31), POTUS issued an Executive Order to Protect Fracking.  The day before he issued a Proclamation declaring October 30 to be The National Day of Remembrance for Americans Killed by Illegal Aliens.

He details specifically what he has done for blacks in My Message to Black America.  I implore you to read it – it will touch your heart.

And that reaches the heart of the matter.  Do you remember Jack Kemp – famed NFL quarterback turned famed GOP politician?  He was my friend, and he would always advise his audiences about voters: “People don’t care what you know if they don’t know you care.”

That’s Donald Trump’s secret – all those tens of thousands at his rallies, all the blacks and latinos who are voting for him, the reason he’s going to win going away, they know he cares.  He’s trying his best for them and he’s succeeding.  Biden doesn’t and never has. QED

It’s not going to be easy.  No way Pedo Joe will concede by 3am Wednesday morning like Hillary in 2016.  This will be a ruthless knife fight. It will be lawfare between armies of lawyers, and real war between armed BLM/Antifa thugs and police/National Guard, with perhaps the Commander-in-Chief ordering in the Marines to take the thugs down (Posse Comitatus doesn’t apply to the Navy, C-in-C can override DoD directives).

This will likely be short-lived as the size of Trump’s electoral landslide combined with the blatancy of Dem cheating will soon be apparent.  People will take matters into their own hands – Halloween gags like this will be real: 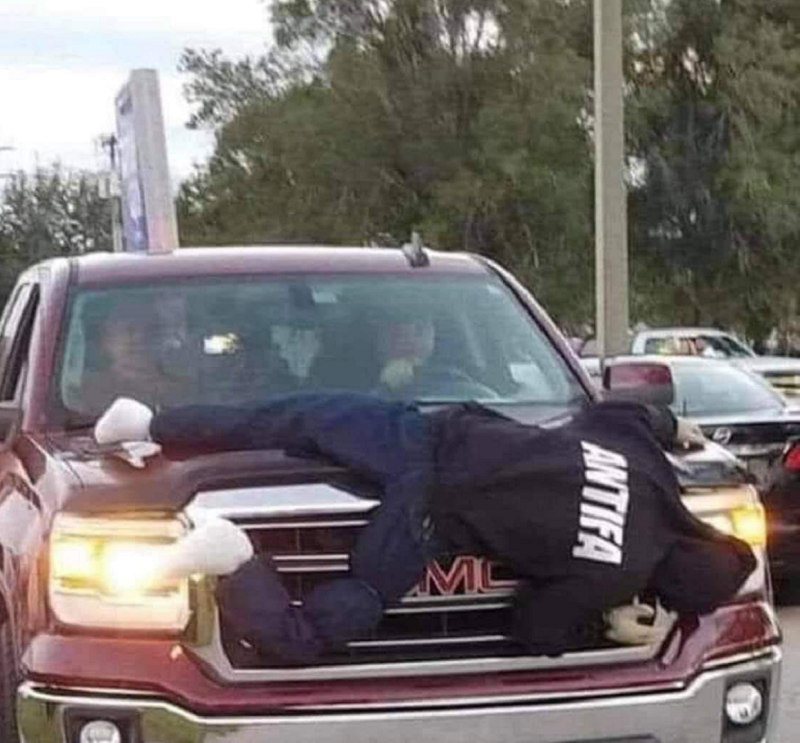 POTUS began the first of his four Pennsylvania rallies on Saturday (10/31) with a subdued speech at George Washington’s headquarters where he launched his epic Christmas Night crossing of the Delaware to score a desperately needed victory against the Brits and their Hessians at Trenton.

“Like Washington’s crossing in 1776, the presidency of Donald Trump is about contingency, about choices. In 2016, the American people voted to elect Donald Trump president of the United States. That choice tore the tattered bandage off the façade of the deep state. It revealed a suppurating wound beneath, a septic disaster the reality of which Americans had somehow concealed from themselves for decades.

Over the last three-and-a-half years, President Trump has done much to cleanse that wound and help heal the organs beneath. But the deep state is in love with its debility, intoxicated by the poison that, so far, has hurt mostly the body politic, not its self-appointed managers.

In just a few days, the nation will make another choice. It is this: either to continue the convalescence and resuscitation that Donald Trump began even before his inauguration in January 2017, or to reapply the cosmetic dressing of lies that will allow the sickness of anti-American hatred to fester unchecked.”

The choice, the President said, was this:

“From day one, Washington insiders have been trying to stop me because they do not own me and they do not control me.

They want control. If these corrupt forces succeed in electing Joe Biden, Washington will see to it that another outsider never becomes president again. It’ll never happen again. They’ll take back control and they will never, ever give it up. This once in a lifetime opportunity to beat the corrupt politicians will be lost forever… A vote for Joe Biden is a vote to give them absolute power and unchecked control over every aspect of American life.”

I believe Americans will make the right choice, and make it overwhelmingly.  It won’t be easy for the forces of evil are strongly arrayed against us.  It will not end quickly, not late tomorrow night nor the next day.  But it will end soon and we will triumph.