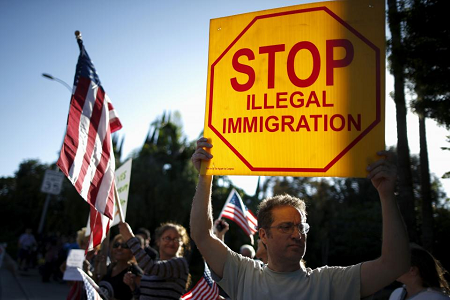 [Note by JW: this is the best explanation of illegal immigration into the US extant – every American needs to read it.]

The illegal immigration debate has come to a head once again.

Until yesterday (1/22), Congress was at an impasse over a temporary spending bill that Senate Democrats refused to support unless it included a provision allowing several hundred thousand illegal aliens to remain in the United States without fear of deportation.

It’s a tiresome ploy by the Democrats, abetted by their allies in the media, using deceptive language to paint a false picture that blurs the distinction between legal and illegal, citizen and foreigner, justice and injustice.

Enough obfuscation. Here are some of the most pernicious myths of illegal immigration, debunked.

The System is “Broken”
Broken for whom exactly? Not for Mexico and Latin America. Together they garner $50 billion in annual remittances. The majority of such transfers are likely sent from illegal aliens.

Some of that largess is also subsidized by the entitlements American taxpayers pay that free up this disposable cash for sending abroad.

In the eyes of Mexico and Latin America, the only thing that would make our system appear “broken” would be enforcing existing U.S. immigration law.

Or perhaps “broken” would be defined as novel ways of paying for Trump’s Wall—by either taxing remittances or so discouraging illegal immigration that a reduction of dollar outflows could be counted (at least rhetorically) as down payments on border construction.

The immigration system is also clearly not broken for the Democrat Party. It has turned California blue. It soon will do the same to Colorado, Nevada, and New Mexico, and someday may flip Arizona and Texas.

If the statist, redistributionist, and identity politics principles of the Democrats no longer appeal to 51 percent of the electorate, then why would they give up on the annual investment in nearly hundreds of thousands of new arrivals that by some means, and in the not too distant future, would translate into loyal, politically predictable voters for whom this approach to politics is second nature?

Employers believe the system is anything but broken. Any good news for the country about skyrocketing minority employment numbers is likely to be bad news for them if it means declining numbers of cheaper illegal aliens to hire.

Open borders have ensured the hiring of industrious workers at cheap wages while passing on the accruing health, educational, legal, and criminal justice costs to the taxpayer. The present system is “working” well enough for this crowd; its possible replacement instead would be defined as “broken.”

Ethnic tribunes support illegal immigration. If the border were closed and the melting pot allowed to work, the façade of identity politics would vanish in a generation.

Recently added accents would be dropped. Hyphenated names would disappear. Trilled r’s would become rare. La Raza/Chicano/Latino Studies programs would become about as popular as Basque or Portuguese.

If immigrants from Mexico came in measured numbers, legally, with high-school diplomas, and along with diverse immigrants from all over the world, then rapid assimilation and integration would soon render them politically individuals, not tribes.

Someone like California Senate Leader Kevin de León (born Kevin Alexander Leon) would never have needed a preposition and an accent mark.

Illegal aliens, of course, believe the present system is working well, at least compared to the possible alternatives. Legal applicants, still faithfully believing in a now-nonexistent system, wait in line. Those south of the border simply cross.

The moment Mexican citizens—unlike Poles, Australians, or Koreans—reach American soil they or their children, in theory, will become categorized as a minority eligible for government affirmative action and preferred hiring. It is as if Los Angeles or Reno had something to do with the centuries-long racial oppression by an ethnically Spanish-legacy elite 500 miles south of the border.

American elites welcome illegal immigration, both for the cheap labor and for the opportunity to virtue signal their magnanimity, perhaps as much as they seem rarely to live adjacent to the barrio or keep their children in schools that are impacted by immigrants, and or shop where English is rarely spoken.

In sum, the system is working for everyone. It is broken only for the naïfs who worry over the long-term consequences of rendering the law null and void, and of ceding our culture to arriving populations for the most part not yet accustomed to the habits that sustain personal and political freedom.

But the “Dreamers”!
There are 700,000-800,000 DACA recipients, though no one knows the exact numbers. Nor is there a clear definition of who constitutes the population of the “Dreamers,” other than arriving into the United States illegally as a minor.

It is an ossified concept, one frozen in amber, given that the average age of a so-called “Dreamer” around 25. When a Dreamer reaches 40, is he still defined as a Dreamer? Or have his “dreams” already come true?

Naturally, minors should not be penalized for the transgressions of their parents. But a large percentage of the DACA cohort is now six or more years into adulthood. Yet upon turning 18 apparently, most have made little effort to obtain either green cards or citizenship.

Dreamers represent less than 10 percent of all illegal aliens residing in the United States. They are also a fraction of the ignored millions of foreign students from all over the world who seek, often in vain, to study in the United States or are skilled applicants for green cards.

Such depressing statistics about DACA might not matter—if supporters of open borders did not always cite incomplete or misleading data.

Weaponizing the Language
Most of the vocabulary surrounding illegal immigration is both politicized and weaponized—as we have seen with “Dreamers.”

Illegal immigration is conflated with legal immigration in order to smear critics with charges of biases against the “other” rather than of simply expressing concerns over legality and sovereignty. By progressive prepping of the linguistic battlefield, some conservatives feel a continued need to “prove” they are not racists by granting more and more exemptions from immigration laws.

“Sanctuary cities” are not “sanctuaries” in the manner we think of a cathedral in a Victor Hugo novel. They are nullification centers where foreign nationals who have broken laws are not subject to full enforcement of immigration laws, due entirely to political considerations.

“Sanctuary city” is not an abstract philosophical term. None of the current sanctuary cities would agree in principle with other jurisdictions in similar fashion nullifying federal laws that advanced left-wing policy objectives. The sobriquet is a euphemism for 1850s-style proto-Confederate, states-rights chauvinism, dressed up similarly in pseudo-moralistic terms.

“Undocumented immigrant” suggests that the problem is a matter of forgetting to bring legal documents, rather than a decision to ignore the need for legal authorization. To become “un-documented” one might first have had to become “documented.” Yet almost no illegal aliens ever were registered as immigrant applicants.

“Undocumented” replaced the adjective “illegal,” just as “immigrant” (and increasingly just “migrant”) superseded the noun “alien.” That is, when the Democrat Party realized that swelling Latino populations began to vote en masse and could salvage what its failing message could not.

At that point, around 2010 or so, the old Democrat and progressive admonitions about illegal immigration cutting the wages of the poor, impeding unionization, and siphoning away social welfare entitlements from the citizen poor were finally and completely jettisoned (along with the language once used by Jimmy Carter and the Clintons). Euphemisms replaced descriptive vocabulary in efforts to construct a new reality.

Political Epithets: Racism and Xenophobia
The cargo of illiberal accusations is likewise constructed, given the United States is the most pro-Latino country in the world, Mexico included.

Half of all immigrants, both legal and illegal, come either from Mexico or Latin America—a sort of inverse racism that assumes illegal Spanish-speaking immigrants are intrinsically more deserving of U.S. residence than legal immigration applicants from Uganda, South Korea, or Ukraine.

The constitution of Mexico carefully delineates all sorts of offices that are not open to naturalized citizens. It lists a variety of immigration offenses that result in automatic deportation or imprisonment—the constant theme being Mexico wants skilled immigrants who can help Mexico (consistent with its constitutional prohibitions against any immigration that might adversely affect “the equilibrium of the national demographics”).

What is also not diverse is Mexico and Latin America. The vast majorities of the population there share roughly similar ethnic heritages and a common language and religion; small numbers of minorities such as blacks are treated as second-class citizens.

Strange, too, are the outward theatrics and themes of illegal alien activism—the frequent waving of Mexican flags, the often loud criticism of a generous host country, the usual demands made upon a foreign nation—mysteriously coupled with the overwhelming desire of millions to enter or remain in the supposedly demonic United States.

What is humane and progressive is defining people by the content of their character rather than by their superficial appearance or ethnic affinities—a notion contrary to the engine of identity politics.

Finally, many ethnic activists are accepting that reality. Why otherwise would the National Council of La Raza belatedly at last drop the nomenclature of “The Race” shortly after the 2016 election to become UnidosUS (“us united”)?

Is America Great or Not?
The entire image of the United States has been smeared in most discussions of illegal immigration.

The thrust of ethnic studies departments, the narratives of open borders activists, the pageantry and symbolism of mass immigration demonstrations, and the chauvinism embedded into popular culture is mostly couched in implicit anti-Americanism.

At least we are led to believe that a culpable America has done wrong in the present and the past, and has to restore its morality by allowing open borders and illegal immigration. But who are the arbiters of American ethics? Vicente Fox? MS-13 gang-bangers? Those whose first act in entering America was to break its laws?

Millions are fleeing paradigms that they apparently judged as wanting, either politically, economically, or socially, or all that and more. Why, then, would foreign nationals have ceased romanticizing their new generous hosts upon their arrival and begun idealizing, instead, their rejected birthplace? And if these are their true feelings on the matter, why did they leave?

Second, there rarely is expressed any formal analysis of why one wishes to enter the United States and leave one’s home country.

Has anyone prohibited Mexico from reformatting its constitution to ensure an independent judiciary, the rule of law, a free-market economy, the protection and free sale of private property, a bill of rights, unfettered free speech, a meritocratic civil service, transparency in law enforcement, and an ethnically blind culture?

The question is not just mindless American boosterism.

In the past, immigrants accepted that they had left Ireland, Italy, or Poland because habits, customs, and government in their home countries were deemed wanting and unworkable, and therefore it was necessary to embrace their antitheses in the United States. It would have made no sense to flee from Italy and expect to live life in America on the premises that an Italian lived in Italy.

Immigration, again brutally or not, is a complex two-step hard bargain that succeeds only when one accepts his chosen country—and de facto rejects the collective protocols of his birthplace.

Why do these mythologies abound? Largely because Americans, the hosts, either cannot anymore even define their own civilization to would-be immigrants, or are so intimidated that they are terrified to even try.