MUELLER’S LEGACY IS HIS BEING GUILTY OF OBSTRUCTION OF JUSTICE 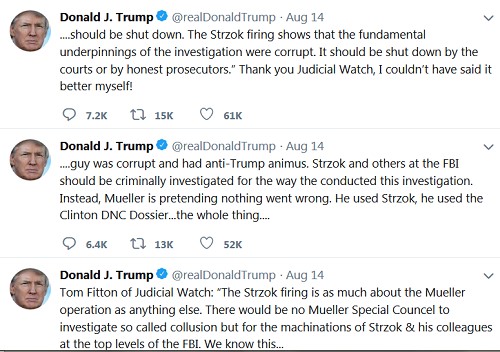 Some 450 days ago we were treated to melodramatic announcements from the media about the start-up of Robert Mueller’s “dream” and “all-star” team.

Reporters gushed in the general hysteria of the times that Mueller would no doubt soon indict President Trump, some of his family, and almost anyone else in his campaign—and therefore end the Trump aberration.

Press puff pieces highlighted the résumés of his superstars—of Lisa Page (no comment needed), Peter Strzok (less than no comment needed), Jeannie Rhee (a former attorney for the Clinton Foundation), Andrew Weissman (Clinton zealot, Obama and DNC donor, and the cheerleader to Sally Yates’s refusal to carry out a presidential order), Aaron Zebley (the former attorney for Clinton staffer Justin Cooper who set up the infamous Clinton home server and smashed to bits her mobile devices), and a host of other pros, who were all shortly to prove Trump-Russian “collusion.”

Although that Mueller mandate of collusion was never formally defined, much less explained as a criminal offense, the media salivated at the idea that Mueller’s whiz kids nonetheless were going to find it and no doubt thereby usher in impeachment.

Now we have gone from melodrama to bathos.

The supposed high drama of election sabotage has descended into leveraging Trump’s lawyer Michael Cohen and then outsourcing him and his baggage to federal prosecutors.

The FBI, having seized from his home and office his stealthily recorded and secret tapes of his own alleged lawyer-client conversations with Trump, now hope to find therein something, anything, untoward with which they can accuse and damage the president.

Paul Manafort is to be exposed for what most already knew he was, a high-flying wheeler-dealer and influence-peddler along the lines of his Clintonite doppelganger, Tony Podesta.

What was billed as an investigation into high intrigue with the Kremlin, has now devolved into questions surrounding one Stormy Daniels and Paul Manafort’s blue ostrich jacket. Quite a come down.

At some theoretical point, I guess Trump could face as much or as little downside in seeking to keep silent a past alleged hook-up, as Robert Mueller does now after keeping the public completely uninformed for months (not until early December 2017) about why much earlier he had fired both the disreputable Peter Strzok (August 2017), and Lisa Page (September 2017).

Indeed, he went so far as to stagger their departures—apparently to obfuscate why they had left and their intimate connection in sending texts, expressing their shared loathing for the target of their own ongoing investigation.

Here is a snippet from a spoon-fed, gullible ABC News report on September 28, 2017—a belated and fallacious story by Mike Levine and Pierre Thomas about Lisa Page’s supposedly normal and scheduled departure from Mueller’s team “weeks ago.”The account turned out to be mostly fake news gathered from “sources said” and “one source” (who would that have been?):

“The latest FBI veteran to leave, Lisa Page, was described by media accounts in June as a trial attorney with “deep experience [in] money laundering and organized crime cases.” She was part of what Wired magazine called Mueller’s “investigatory dream team.” But weeks ago, Page left the Special Counsel’s office and returned to work in the office of the FBI’s general counsel, sources said. According to one source, Page joined Mueller’s team on a short, temporary assignment and always expected to return as soon as that assignment ended.”

The preposterous “always expected to return” article also notes in passing the much earlier, equally mysterious (“unclear”), but apparently unconnected departure of another dream team member:

“It’s unclear why Strzok stepped away from Mueller’s team of nearly two dozen lawyers, investigators and administrative staffers. Strzok, who has spent much of his law enforcement career working counterintelligence cases and has been unanimously praised by government officials who spoke with ABC News, is now working for the FBI’s human resources division. One source told ABC News today he’s sorry Mueller’s team no longer has Strzok’s experience and insight at its disposal.”

All of that leaked puff piece was a contrived concealment of the truth—orchestrated from the very top either of the FBI or Mueller investigation. For months, the yarn deliberately deceived the American people about what had been going on among some of the key players of Mueller’s team.

Mueller originally was appointed due to the contrived leaks from the Steele dossier—a misnamed document that was cobbled together by Glenn Simpson and his wife of Fusion GPS for purposes of destroying Donald Trump’s candidacy and then presidency.

Mueller must have analyzed carefully what amounts to this font of his entire investigation. And yet his team has so far shown no interest in whether their own foundational document was used fraudulently to obtain FISA warrants.

Mueller’s lawyers show little concern for whether Christopher Steele himself colluded with Russians to find his dirt, or whether Hillary Clinton’s hiring of Fusion GPS and Steele constituted a sort of Russian collusion in and of itself—or whether Steele was mostly a fraud whose distant espionage past was seen by the creative writers at Fusion GPS as useful window dressing in efforts to peddle and seed the fictitious dossier as the work of serious spooks.

Much less does Mueller worry whether John Brennan, former CIA Director, improperly seeded the dossier to various agencies to ensure it reached the media before the election.

Or whether FBI Director James Comey lied about its pivotal importance in obtaining a FISA warrant.

Or why Bruce Ohr, the fourth highest official in the Justice Department, before and after the election was meeting with a fired Christopher Steele—supposed severed from FBI support—to pass along his further gossip and dirt to the FBI.

Gossip and dirt fueled by the suppressed fact that Ohr’s wife was working with Steele and was a Fusion GPS operative intent on seeing her “research” fertilized in the right government agencies to delegitimize Trump.

All of this and more shows Mueller sought with the dossier to find wrongdoing elsewhere, when it was right under his nose all along. Again, the circumstances of the dossier’s creation and dissemination were the catalysts for the 2016 election scandal.

Robert Mueller’s legacy will be not so much that he was chasing the white whales of Stormy Daniels, Michael Cohen, and Paul Manafort, or even that he is another Patrick Fitzgerald desperate to indict Trump as the new Scooter Libby.

Instead, Mueller’s testament thus far will be one of willful blindness: he saw nothing ethically or legally wrong, or dangerous to the republic, in a bought and fictional dossier that fueled both his own reason to be, and in various ways was central to an historic government effort to surveil, to infiltrate, to undermine, and to discredit a political campaign first—and later to derail an elected presidency.

If that isn’t obstruction of justice, what could it possibly be?