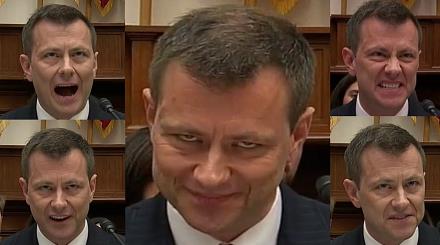 Americans got their first good look last week at Peter Strzok, the FBI agent at the center of the cover up of Hillary’s email scandal and the plot to frame President Trump.

This, above and below, is who they saw during the joint hearing of the House Judiciary and Oversight Committees July 12:

Before the hearing began, the New York Times wrote a story on it with the headline: “FBI Agent at Center of Russia Probe Turns Tables on GOP.”

It didn’t work out that way. Sharp questions from Reps. Trey Gowdy, Jim Jordan, John Ratcliffe and Louis Gohmert triggered Strzok, who looked less like a victim of GOP persecution, more like a smug sociopath who tells preposterous lies.

“In 27 years in the Bureau, I have never known, worked, associated, trained with any agent as obnoxious as Strzok,” an FBI veteran told Paul Sperry.

Strzok “was in charge of the Russia investigation. He started it… He collected all of the evidence, so his credibility is of primary importance,” Ratcliffe said.

The New York Times tacitly acknowledged things hadn’t gone according to their narrative by changing their headline above  to: “FBI Agent Defends Actions in Russia Probe in Contentious House Testimony.”

The GRU officers are charged with “conspiring to hack into computers, steal documents, and release those documents with the intent to interfere in the election.”

Two of them also conspired to infiltrate the computers of state boards of election, and companies that supply software used to administer elections.

Almost everything in the indictments was in this (heavily redacted) report the House Intelligence Committee issued in March. “We basically wrote the indictment for Mueller,” said Devin Nunes, chairman of the HPSCI.

The indictments are a PR gimmick. Odds are the Easter Bunny will be Pope before any of the GRU officers stand trial.

If a GRU officer were to contest this sloppy indictment, he may humiliate Team Mueller as much as has counsel for a Russian “entity” they indicted for buying ads and making bot comments on social media.

Also overlooked by Fake Newsers is the import of Rosenstein briefing President Trump days before. (You don’t give advance notice to a potential target of an investigation.)

Mueller doesn’t claim the GRU meddled to benefit Trump.  The timeline in the indictment indicates that wasn’t their purpose.

The GRU spying took place while Obama was president. Then National Security Adviser Susan Rice was aware of it, but told Obama Cybersecurity Coordinator to “stand down” with regard to Russian meddling in the election.

The timing of the indictment gives the president leverage with Putin, said Fiona Mikayes, who was a very good intel officer. (She briefed generals in the National Military Command Center.)

The GRU officers named in the indictment could be arrested in any country where INTERPOL operates.

“Rosenstein not only armed DJT w a ton of ammo, those indictments put the GRU activities AROUND THE ENTIRE WORLD in freefall,” she said. John Bolton agrees.

We know much less about what’s going on than we think we do. We need to look at the big picture from 50,000 feet.

It’s a mosaic of mind boggling corruption, weaponization of government for partisan purposes, sedition, and perhaps treason, on a heretofore unimaginable scale.

What we see is a jigsaw puzzle with many pieces missing. We haven’t got the whole picture. But President Trump has all the missing pieces.

Robert Mueller is a rat bastard who would frame the president in a heartbeat if he thought he could get away with it.

But he can’t. The coup failed. What the coup plotters plot now is how to stay out of jail. Their behavior at the Strzok hearing indicates Democrats are absolutely terrified of what might be disclosed.

The Special Counsel is spinning his wheels, waiting for DOJ IG Michael Horowitz’s report on FISA abuse. If, as expected, that report indicates Strzok, (briefly) a member of Mueller’s team, altered the 302 report of his interview with LTG Michael Flynn, a wooden stake will be driven through the heart of the Russia collusion narrative, and Mueller’s credibility.

Conservatives who think the only things happening are what they read about in the newspaper or see on television assume Rosenstein, FBI Director Robert Wray, and Attorney General Jeff Sessions are incompetent, cowardly, or Swamp Things.

We’d do well to remember Trump appointed Rosenstein and Wray, could fire them at any time (but hasn’t), has never said an unkind word about either. Why do so many of us think we know more about them than the president does?

Sessions had to recuse himself because he was a target of the illegal spying. DOJ rules forbid a victim from prosecuting his victimizers.

Sessions appointed John Huber, the U.S. attorney in Utah, to investigate crimes related to the cabal, gave him 470 attorneys to help.

We don’t know what Team Huber is doing, but the massive numbers of sealed indictments piling up in federal courthouses suggest they’re doing something.

Under Sessions, DOJ is cracking down on MS-13, human trafficking, and pedophile rings. That’s not nothing. 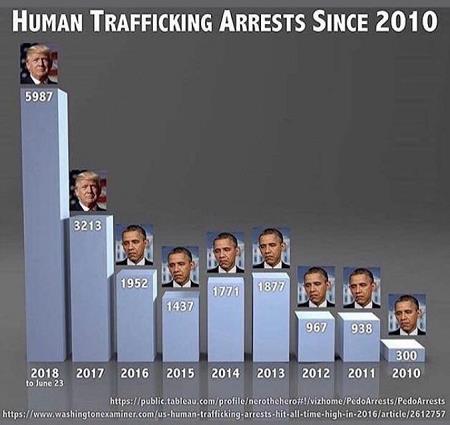 Those in a snit because the swamp isn’t draining fast enough to suit them should remember it took 8 years of Clinton, 8 years of Bush, and, especially, 8 years of Obama to grow the swamp. Trump has had barely a year and a half to drain it.

The size of the cabal and the number and enormity of their crimes make it harder to move fast.

The crimes are so horrendous normal Americans will find it hard to believe them. Public opinion must be prepared carefully, gradually, for people to accept the most terrible revelations. The Strzok hearing opened more eyes.

President Trump has earned our trust. We should trust his PLAN. It’s working.