MUELLER AND HIS CABAL OF VILLAINOUS KNAVES 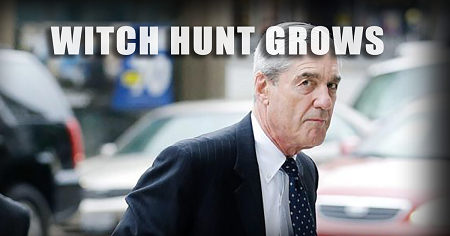 By now it should be clear to every sentient American that the Mueller “investigation” is not an investigation at all.  It is, as President Trump and others have noted, a witch hunt.

The progressive left still refuses to accept the outcome of the 2016 election and has been trying to undo it by any means necessary.  The “collusion with Russia” meme was and remains a non-starter, so now the real motive for Mueller’s appointment as special counsel is evident for all to see.

It was always to find a way to remove Trump from office.

Mueller and his gang of thugs, like Andrew Weissmann, are the left’s version of mobsters: cross them, and you will pay.  The Beltway establishment cannot, and will not, abide an outsider in their midst.

Why is this travesty being allowed to continue?  Why is Devin Nunes the only man in Congress to cry foul from the rooftops?

Why aren’t Paul Ryan and Mitch McConnell and the rest of the Republican majority banding together to put a stop to what is clearly a campaign to destroy a duly elected president who, in just under a year, has kick-started the economy, done more to protect our borders than any of his predecessors, appointed a constitutional jurist to the Supreme Court, and rolled back the last administration’s job-killing regulatory overreach?

One can only assume that it is because they, the Beltway establishment and the Deep State, are all on the same page.  None of the denizens of D.C. wants a man they consider a parvenu to be a member of their club, let alone the president of it.  They are a horde of sore losers.

But Trump is not falling for their bullying tactics.  He’s like the old Bozo Bop Bag, a toy for three-year-olds.  They keep trying to knock him down, but he bounces right back up with a smile on his face.

Most of the members of Congress are behaving like spoiled three-year-olds.  They didn’t get their way, and they are behaving badly.  They have forgotten they were elected to serve their constituents.  Too many of them are there only to serve themselves.  For the most part, the Republicans and Democrats are indistinguishable from one another.

Why are Mueller and his coevals, Rod Rosenstein and Andrew McCabe, still there?  They are obviously not honest brokers.  That is so clear now.  Why have we only now learned that Peter Strzok, an anti-Trump, pro-Clinton FBI agent, was allowed to conduct the interviews of Hillary Clinton and Lt. Gen. Michael Flynn?

Because the whole bunch of them are corrupt to the core.

If there are legitimate, law-abiding agents at the FBI, where are they?  Why are they not coming forward to speak about their superiors’ corruption?  Perhaps they, like all the women who have been abused by powerful men, are afraid for their careers.  What a sad commentary on the character of our federal bureaucrats and our Congress.

We conservatives, with a few exceptions, have elected a bunch of pajama boys to represent us.  The Democrats elect street fighters with the character of MS-13 members.

They lie, cheat, and steal to get their way.  They think nothing of destroying good men and women if it serves their purposes.  Mueller and his swarm of killer lawyers are quite likely high-fiving each other over breaking Gen. Flynn and his family, financially and emotionally.

These are vicious, evil people, Mueller and his pals.

Everyone knows now that it was the Clinton campaign that colluded with Russia.  It paid for the fake “dossier.”  It was Hillary Clinton’s campaign that refused to let the FBI examine the allegedly hacked DNC computers.  It is she who should be investigated.

Hillary Clinton and her husband have been the most corrupt people on the American political stage for over forty years, and the progressive left has looked the other way and protected them.

Hillary was thrown off the Watergate Committee for unethical conduct in 1974.  They have gotten away with all manner of criminal offenses, financial, political, and sexual.  Their “foundation” is nothing but the repository for all the ill gotten funds they extorted from people and governments for favors while she was secretary of state.

They have operated their many scams above the law because there is a different standard for Democrats from what Republicans must meet, and the Republicans, milksops that they are, take it, year after year after year.  They are taking it now, and Americans are watching in disgust.

Mueller and his pals have long protected the Clintons, no matter how egregious their crimes, but are relentless in their quest to destroy Trump and his family.  Will no one rid us these meddlesome villainous knaves?