2 The Point News » Behind The Lines » Free Articles » MOROCCAN MAGIC 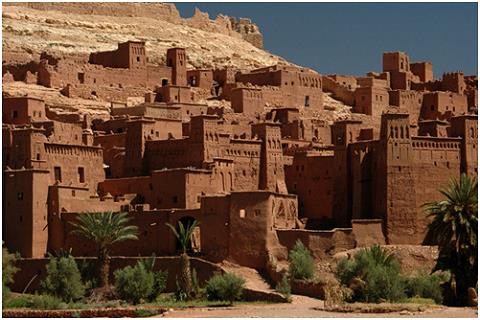 There is a magic in Morocco that few other countries on earth possess.  Athwart Africa’s northwest corner at the Strait of Gibraltar, its north coast is the Mediterranean, its west coast is the Atlantic, dotted with charming ports and beautiful beaches.

The size of Texas, it stretches from these seas to deep into the Sahara Desert, with the massive snow-capped Atlas Mountains in between.  This geographical diversity provides an astonishing array of scenic beauty. 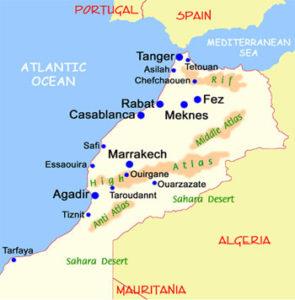 Yet it is the people and their culture that provide the real magic.  They are the Berbers, one the world’s most ancient peoples.  They call themselves Amazigh, the Unconquered People, the original inhabitants of Morocco and the entire Maghreb or North Coast of Africa all the way to Egypt.

Yes, the Berbers are older than the Egyptians.  How old?  Ever hear of the Lapps of Lapland in northern Scandinavia, reindeer herders who call themselves Saami?  The Berbers/Amazigh and the Lapps/Saami – living today one in the Sahara, the other in the Arctic – are directly related.

Both are descended from the same stock of Cro-Magnon Ice Age hunters that split in two 15,000 years ago – one moving far north, the other south crossing the Gibraltar Strait to Africa.  The Moroccan Berbers today are their descendants.  (See Appendix below.)

Wheeler Expeditions is going to experience the magic of Morocco and Berber culture in early April next year.  Perhaps you’d like to experience it with me.

We arrive in Casablanca, and after a day in the capital of Rabat head for the Blue City of Chefchaouen, a uniquely picturesque hillside Berber village with every home rinsed in blue:

From there we drive to the World Heritage Site of Volubilis, the ancient capital of the Berber Kingdom of Mauretania with magnificent Roman ruins when part of the Roman Empire, famed for its astonishingly well-preserved floor tile mosaics. 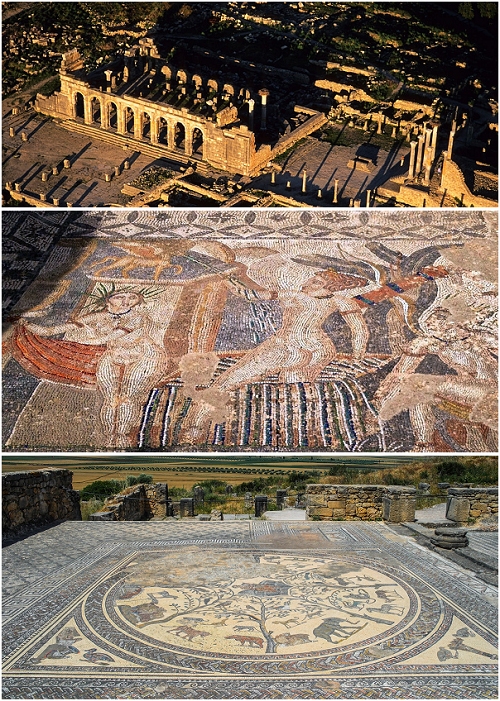 Close to Volubilis is Meknes, an old Imperial Berber city, where we go through the Bab Mansour gate to explore its colorful spice markets… 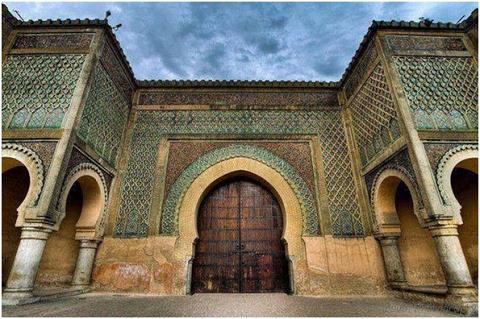 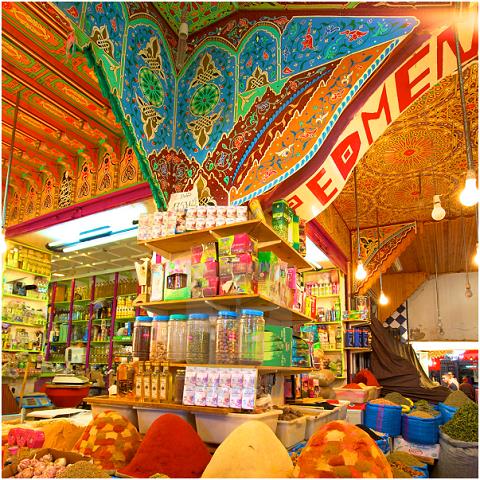 From Meknes we go to the most famous ancient Berber city of all, the World Heritage Site of Fez ­– the Medieval Berber capital which in the 1100s was the largest city in the world. 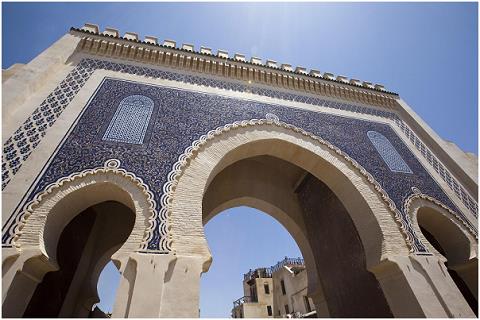 And you enter the world’s largest car-free urban area, a labyrinth of over 9,000 foot-trafficked small streets and alleys with a surprise around every corner.  In the Tanner’s Quarter you’ll find the unique olfactory experience of the thousand-year old Chouara Tannery where barefoot workers tread skins in dyeing pits in the original way. 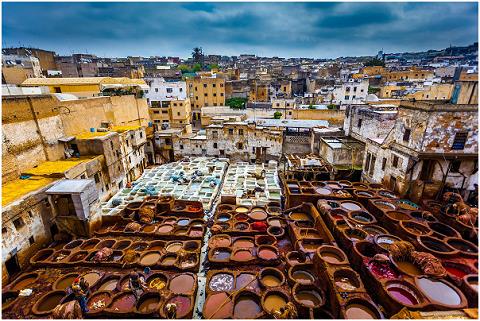 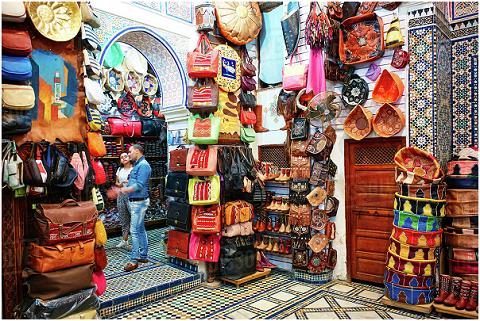 And an equally extraordinary multitude of Riads – homes of wealthy merchants converted into luxury boutique hotels.

Now let’s head to the Sahara.  We’ll camp with a Berber family and explore on camel back the dunes of the Erg Chebbi. 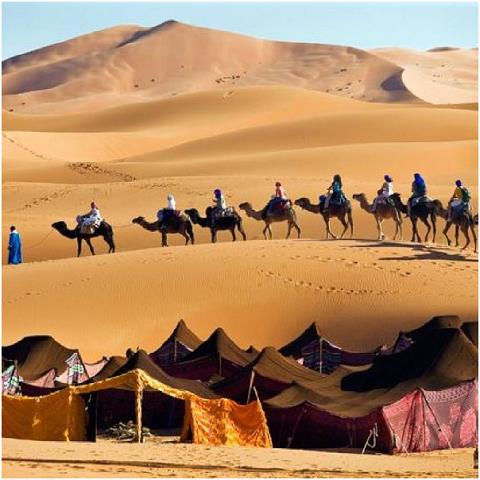 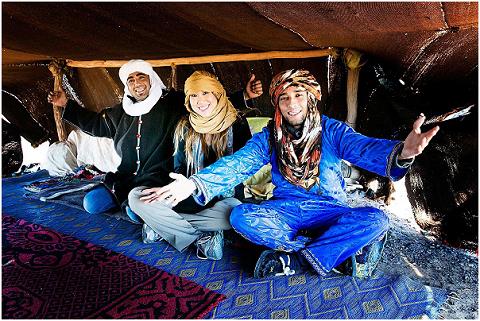 Leaving the dunes of the Sahara, we have a spectacular drive through deep gorges…

To reach the fabled Kasbah on the edge of the Sahara, Ouarzazate.  It’s so photogenic that many famous movies have been filmed here, from Lawrence of Arabia to Gladiator, Troy and Jewel of the Nile to the Game of Thrones.  There are so many movie sets here, with so many films still being shot, it’s the world’s largest film studio with its own hotel, the Oscar Hotel.

Nearby, however, is Morocco’s most famous Kasbah – a citadel and caravan village – that’s real, no movie set: The World Heritage Site of Ait Ben Haddou. This is home to scores of Berber families.  You first saw it at the start above, here it is again.

From here we cross over the crest of the High Atlas to Marrakesh.  No visit to Morocco would be complete without being here.  You’ll explore its famous gardens…

Go on a wildly indulgent shopping spree in the souk… 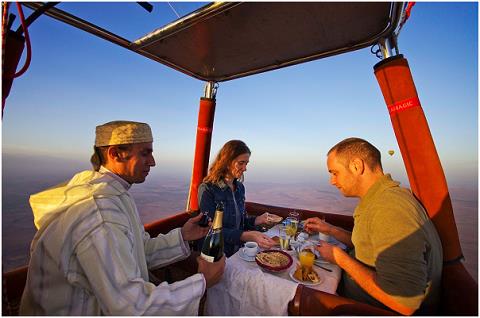 We end on the ocean – the peaceful ancient fishing port of Essaouira and the relaxing calm of its beach resorts. 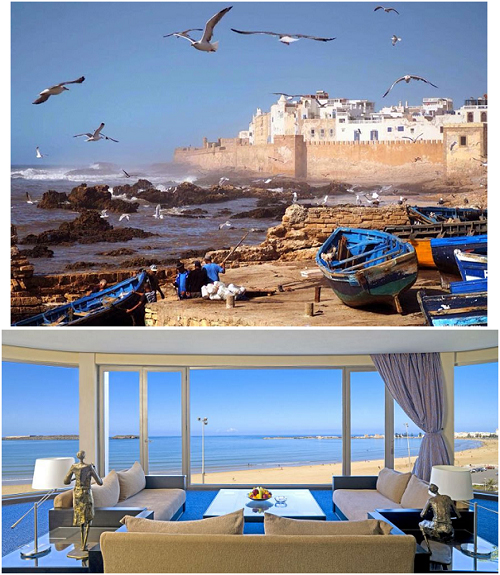 These photos are but a glimpse of what we’ll experience as there’s so much more, as we stay in luxurious riads, dine with sumptuous Moroccan cuisine, and enjoy it all in the camaraderie of your fellow MAGA TTPers.

To do so, to make Moroccan Magic a part of your life, let me know quickly.  I can only take ten of you, and you can imagine with what you’ve just seen, how fast this will fill.

Life is short.  The time for a Great Adventure is now.  Carpe diem – see you in Casablanca!

The Berbers/Amazigh and the Lapps/Saami – living today 9,000 miles apart – are directly related.  Both are descended from the same stock of Cro-Magnon Ice Age hunters that split in two 15,000 years ago – one moving far north, the other south crossing the Gibraltar Strait to Africa.  The Moroccan Berbers today are their descendants.

This is through a genetic study of their Mitochondrial DNA (mtDNA) inherited maternally.  The original inhabitants of Europe (humans like us, not Neanderthals) were Cro-Magnon hunter-gatherers who first populated Europe starting some 45,000 years ago.  Then came the last great Ice Age.

During the Last Glacial Maximum (LGM) lasting from ca. 26kya (thousand years ago) to 16kya, ice sheets a mile or two thick covered northern Europe, and the Cro-Magnons of Western Europe retreated into a region called the Franco-Cantabrian Refuge, what is now southern France and northern Spain.

It is this refuge where arose the first art of humanity – the incredible Paleolithic cave paintings at Altamira, Lascaux, Chauvet et al.  Picasso was so overwhelmed by the magnificent sophistication of the 20,000 year-old cave art at Altamira he said, “After Altamira, all is decadence.”

When the LGM ended, the Cro-Magnon repopulated the continent out of the refuge.  Those with the mtMDA haplogroup U5b1b divided about 15kya (15,000 years ago), with one group ending up in far northern Scandinavia to become the Saami, the other crossing the Gibraltar Strait to North Africa to become the Amazigh.  The Berbers you meet in Morocco today are their descendants.  (See Saami and Berbers – An Unexpected Mitochondrial DNA Link, American Journal of Human Genetics, March 2005.)

In the millennia since, the Berbers resisted the Phoenicians, Carthaginians, Romans, and Arabs.  By the time of the 4th Century AD, Berbers had adopted Christianity and formed several Christian Kingdoms.  St. Augustine of Hippo (354-430) was Berber.

Facing the Moslem Conquest of North Africa in the late 600’s by invading Arabs was the famed Berber, the Christian Queen Kahina.  The invaders finally overwhelmed her army and killed her in 703 – after which the Berbers were forced to become Islamicized.

In all the centuries since, there have been almost constant Amazigh rebellions and revolts against their Arab rulers.  Today, however, the Berber language, Tamazight, is officially recognized and taught, and Berber men and women have full rights and freedoms.