2 The Point News » Ledeen's Lair » Members Only » MCMASTER TO BOLTON 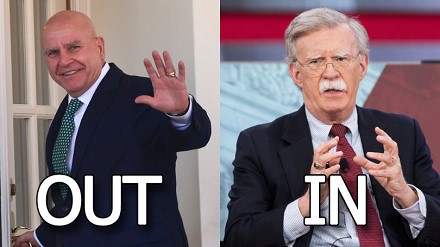 Anyone who has held as many hard jobs in Washington as has John Bolton, will have made numerous enemies, whatever his personality.

John has plenty of critics, and in this dramatic Bolton-for-McMaster change, there are lots of unhappy officials, not just including the McMaster loyalists at the National Security Council who are surely slated for an early exit.

As the Los Angeles Times puts it succinctly in a headline, “Bolton’s not nice, but he’s good.”  Actually, those of us who have known him for a long time would differ on the “not nice” bit.  I think he’s very nice.

I met him when we were both at the American Enterprise Institute, and truth be told I was not at all enthusiastic about his arrival there.  I wasn’t a fan of Jim Baker, for whom John had worked at the State Department, and I wondered why AEI wanted a “Baker person.”

But I changed my mind as I read the many articles, essays, and even books that John produced.  And he was willing to debate issues on which we disagreed, or seemed to disagree.  Over the years, we’ve both changed our minds on several policy issues.

John’s Cabinet colleagues will find him thoughtful, a rare quality in any bureaucracy, and even rarer when it comes to foreign policy debates in Washington.

Not that he brooks silliness.  He has real convictions, as you’d want and expect.   I hope and expect that he finally imposes real personnel change at the NSC.  His predecessor had a baffling sympathy for NSC staffers who had faithfully served in the Obama Administration, and actually told his employees that there was no such thing as a “holdover,” only loyal staffers.

John Bolton knows better, as any grownup should.  We’ll see soon enough.  Personnel is policy, and to date the greatest failure of the Trumpists is an ongoing failure to staff out the government with their own people.

The Bolton move suggests that the president is at least beginning to recognize this, and it would be confirmed by a substantial facelift to the NSC staff.  Perhaps even including the hapless head of White House personnel, Gianni di Stefano.

Apparently Trump and Bolton have had many discussions about this operation, so the new national security adviser will no doubt have a very clear picture of his powers, as well as the policies the president wants articulated and executed.

I expect John will work very well with new Secretary of State Mike Pompeo and Secretary of Defense Jim Mattis, especially regarding Iran.  All three have a long-standing animus regarding the Islamic Republic of Iran.  And all three have been outspoken on the Russian threat to American national security.

Both Putin and Khamenei know who John Bolton is, and you can be sure they are not happy to see him moving in down the corridor from the Oval Office.

I don’t know General Kelly, but he’s a Marine and I expect he will welcome John’s discipline, candor, and first-class intellect.  The chief of staff is an extremely powerful man;  let’s hope he likes moustaches.

It will be interesting to see how the congressional and senatorial Left challenge Bolton.  (Note however that appointment of the President’s National Security Advisor does not require Senate confirmation – John will be Trump’s NSA on April 9 whether the Senate likes it or not.)

Senator Cardin has already put an intemperate and badly ill-informed gripe on Twitter, accusing John of being an extremist neoconservative.  Doubly wrong!

He is the very model of temperance, you can change his mind with carefully reasoned argument, and he is not remotely neoconnish.  He’s tough, but he’s always rejected the key neoconservative principle of crafting foreign policy in order to advance democracy.  His world is much more Kissingerian than Sharanskyite.

The replacement of Lt. General McMaster and the ascension of John Bolton has been so widely expected for such a long time that I had wrongly concluded that the president wanted McMaster where he was, and/or that there was such ferocious opposition to Bolton that the move was simply impossible.

Wrong on both counts, obviously, and glad of it.  I never understood the choice of Tillerson and McMaster.  The new men make much more sense to me, and it won’t take long to verify it.

Trump’s first year has brought us deeper into the global war our enemies—very much in cahoots with each other—are waging against us.  John Bolton sees this, and our success, indeed our survival, now will benefit from a security advisor who knows that North Koreans, Chinese, Russians, Iranians, radical Muslims, Cubans, Venezuelans and others must be thwarted.

It won’t be easy.  Or cheap.  Or quick.  But John’s up to it if anyone is.  We’ll have early indicators.  Faster than you think.

Michael Ledeen is a Freedom Scholar at the Foundation for Defense of Democracies.