MAN’S INHUMANITY TO MAN – THE DEMOCRATS HAVE MASTERED IT 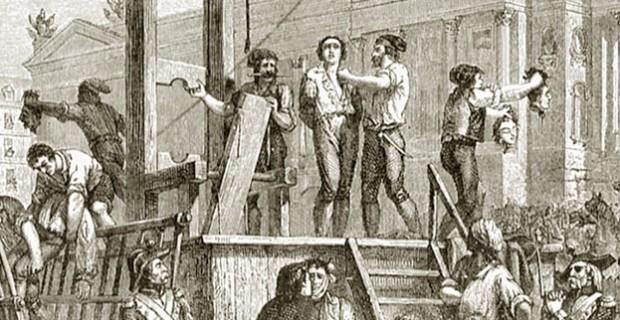 Democrats wish for a French Revolution Reign of Terror

A version of Les Misérables, new to U.S. viewers, began airing on PBS last week. While even nominally civilized people of the West were cognizant of the cruelty human beings were capable of for hundreds of years, Victor Hugo’s novel of 1862 was an exceptional rendition of man’s capacity for barbarity.

While Lincoln and the abolitionists were fighting to end slavery in America after having won independence from England, France was still suffering the disastrous consequences of its own ten-year revolution.

That nation lacked the spirit of humanity that animated our revolution and resulted in the American Constitution.  Their revolution devolved into mass murder.  The Reign of Terror began when the Jacobins seized power in 1793.  Thousands were guillotined, and Christianity was eradicated.

Sound familiar?  Our Left has driven itself into a Jacobin frenzy.  If they could guillotine President Trump and every one of his supporters and get away with it, many leftists would.

They actually do believe we should all be discounted, erased, disempowered.  Our votes should not count in their world.  They are smart and entitled; we are stupid and should not be heard.

It has taken many centuries to arrive at the moment in time in which we now live and breathe.  The American miracle, our Constitution and market economy, has brought wealth and security to millions of people on the planet.

And yet to the Global Left, the U.S. is a scourge to be eradicated, just as Israel, the only democracy in the Middle East, should be extinguished.  This is how lunatic the Left has become.

They revere power and control over liberty, over freedom for every individual.  They do not count or see us as individuals; they see us all as members of one identity group or another.

We are black, white, gay, trans, rich, poor, etc.  We are nothing to the Left but faceless members of a privileged, oppressed, or hated bracket of one kind or another.

All of us, no matter what category to which we have been assigned, are either pawns in their game of power over all or objects of contempt for our noisy efforts and, in 2016, success in electing someone we chose.

Oh, the horror!  They cannot abide their loss and self-righteously set out to undo it.  Of this, there is no longer any doubt.  They attempted a coup and failed.  Now they are murderously mad!

The migrants attempting to enter the U.S. illegally at the southern border do present a major crisis, despite the Democrats’ protestations to the contrary.  They know how serious it is, but giving in to Trump’s attempt to implement border security is impossible for this crowd of naysayers.

They would rather see the country overrun with illegals, knowing many of them are gang members, cartel operatives, trafficked women and children, and persons with no knowledge of modern civilized behavior because they have never been socialized into such a political order.

These are the people our Democrats are inviting to breach our borders by the thousands in hopes of derailing Trump.

How dumb is this?  Really dumb.  Now that Trump suggested the possibility of delivering these migrants to those virtue-signaling sanctuary cities, the same migrant-loving Left is up in arms with outrage.  How dare he put those pawns in our cities?  This after the mayors and governors of sanctuary cities and states insist their states and cities are safer because of all their illegal residents.

Hmmm.  One has to wonder: how many Hondurans will it take to lower the crime rate in Chicago?  The Democrats lie about the crime stats, and they lie about wanting more illegals in their own cities.

All of this brings us back to man’s inhumanity to man.  The Democrats’ party used to be viable.  Men like Truman and JFK loved the country and wanted to do right by its people.

That began to change with LBJ, a political thug if there ever were one.  Carter was just weak and ineffectual.  Clinton was surprisingly moderate after he lost the House.  Obama did incalculable damage to the nation; it will be years before the truth of his desecration of America is written by legitimate historians.

Obama was a stealth president who set out to transform the country and largely succeeded to that end.  He was a race-hustler of the first order who succeeded in escalating the racial rage of American blacks.  He did it on purpose and was wildly effective.

All of the Democrats running for president have prostrated themselves before the ridiculous and corrupt Al Sharpton.  Not one of them has the guts to deny fealty to this horrid man.  Not one.  The Democrats’ party today is defined by Ocasio-Cortez; Tlaib; and Ilhan Omar, the woman who thinks the crime of 9/11 was a rise in Islamophobia.

The party is led by men like Jerald Nadler, Adam Schiff, Eric Swalwell, Ted Leiu; each of them, all of them, are intellectually challenged.

One has only to see them confronted by the glorious Candace Owens to know this is true. There is not a wise man or woman among them. Not one.

They have just become hatefully anti-American and inhumane. Hugo’s Javert pursued Valjean like the Democrats of today are harassing Donald Trump. All those who know the book should remember that it was Valjean who was the good man.