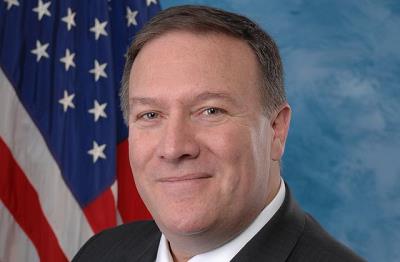 [If I were incoming Secretary of State Mike Pompeo’s speechwriter, here’s the speech I’d write for him – JW]

The President announced that with his new Cabinet changes, he’s getting the Cabinet he wants.  My job as Secretary of State will be to give him the foreign policy he wants.

We cannot do that without replacing the Obama holdovers who are committed to thwarting the President’s foreign policy goals.  The man to do that will be my new Deputy Secretary of State, John Bolton.

With John at my side, working with the great many patriots in our diplomatic corps and in tandem with other members of the President’s Cabinet, we are going to make American foreign policy great again.

The US Marines gave a great motto.  Marines define themselves as “your best friend, your worst enemy.”  The State Department will now adopt that motto.

An example of the former is Israel.  An example of the latter is Turkey under the leadership of Mr. Erdogan.  Recently (3/15), he had the temerity to have his Foreign Minister say that I and the State Department must “learn how to behave” before there can be good relations between our countries.

So let me explain something to Mr. Erdogan – that it is you who must learn how to behave towards us.  You are imposing an Islamist dictatorship upon your country, committed to perpetrating genocide upon millions of your Kurdish citizens, and dream of recreating the goal of the Ottoman Empire, that of conquering Europe for Islam.

It is for these reasons and much more that until you learn how to behave towards America and the West, I will advocate Turkey’s membership in NATO be suspended.  You have unilaterally chosen to be our ally no longer and we must recognize that in action.  We will continue to do so until Turkey returns to being a pro-West secular democracy as it was before.

Another example of the latter is Iran.  I will advocate the full and complete withdrawal from and elimination of Mr. Obama’s “Deal” with Iran – called a “Deal” and not a Treaty as Mr. Obama knew it would never be ratified by the Senate.  Thus it has no force of law and we repudiate it entirely.

A third example is Russia under Mr. Putin.  As you know, on March 15, the President, together with the leaders of France, Germany, and the United Kingdom, signed a Joint Statement condemning Russia’s government for attempting to assassinate two people on British soil with a military-grade nerve agent.

His recent claims of developing of nuclear-powered cruise missiles and torpedoes are, quite frankly, ridiculous.

Possibly they were made to distract from the embarrassing failure of Russia’s vaunted SA400 air defense systems in Syria recently, flushing the hundreds of millions of dollars Iran just spent on them down the drain.

The bald truth is that Russia’s economy is a one-trick pony of oil/gas exports to Europe.  Which is why I will encourage, working with Energy Secretary Perry, and the leaders of Europe – Mrs. May in particular – to invite US frackers to their countries so that they can extract their own gas, and no longer be dependent on Russian supplies.

As a friend of mine from Alaska puts it, “Fracking is to Putin what a .500 S&W Magnum is to a grizzly bear.”

Which necessitates my encouragement of these leaders to understand the fraud of “man-made global warming.”  And how, by the way, the Kremlin has anti-fracking environmentalist groups and journalists on its payroll in every European country.  We’ll be exposing them.

We need to make it clear why we will complete our full withdrawal from the Paris Accord on so-called “Climate Change.”

The claim that human activity is disastrously warming up the planet with CO2 emissions is not science, it is a political agenda of the Left – the Left’s replacement of Marxism as a rationale for totalitarian control over everyone’s life.  It is literally political science.

Human CO2 emissions account for less than 2/10ths of 1% of global greenhouse gases in earth’s atmosphere.  As ice core samples of millions of years show, increases in atmospheric CO2 always come after a period of a warming Earth.  CO2 held in solution in ocean water is released when the oceans warm up.

More CO2 in the air is a consequence of warming, not its cause.

Turning to China, the ancient Chinese proverb applies – it is both our greatest danger and our greatest opportunity.

The reason is that its leadership is Marxist locked into the Marxist metaphysics of Win-Lose.  In any relationship between countries, classes of people (rich vs. poor, employees vs. employers, on and on), or individuals, for one side to win the other side must lose, zero-sum.

For Marxists, reality has to be this way, you can’t get something out of nothing, that countries or people like employees and employers can cooperate to mutual advantage with both winning is impossible, like a square circle.

We must get Mr. Xi in Beijing and Mr. Putin in Moscow to grasp this is a fundamental misunderstanding of reality.

Americans learn this in Kindergarten.  That’s where we learn to share, that all the toys don’t belong just to us, that playing nice and win-win gets you more of what you want and peacefully, without fighting.

However, we also learn this doesn’t work with bullies.

This is a lesson that needs to be learned in the South China Sea.  It does not all belong to China, anymore that it belongs entirely to any of the other six nations that border it.  The Chinese will learn to share the South China Sea with its neighbors, and the United States will not tolerate it being a bully. Period.

The obverse is how much China has to gain playing win-win.  That’s the opportunity – for if they do, America and China can cooperate to mutual benefit.  The same applies of course to Russia.

The most immediate challenge American foreign policy faces right now is the pending summit between President Trump and North Korea’s leader Kim Jong-un.  Mr. Trump is one of the world’s most consummate deal-makers, practicing “the art of the deal” – which means “the art of the win-win” – for decades.

That’s what Kim’s highest goal is – it’s not to nuke the US, especially when that would instantly result in his country reduced to radioactive rubble.

The President believes that such an understanding makes a real bona fide deal between Washington and Pyongyang possible – and I will support him in every way I can to help him actualize it.

Those are a sample of main examples of what I will work to achieve as Secretary of State.

America is blessed at this moment to have such an extraordinary President as Donald Trump.  I am honored to play a role in his historic presidency – and that role is to Make American Foreign Policy Great Again.