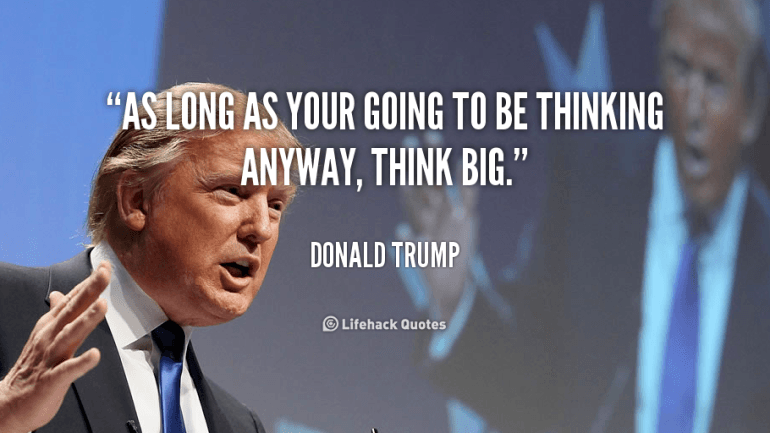 America is depressed. The combination of the Chinese coronavirus and racial unrest has left many Americans searching for ways to avoid the news. Donald Trump’s popularity has suffered—not because he is responsible for these problems but rather because they happened while he occupies the nation’s highest office.

What Americans need now is a jolt of positivity and optimism. Many loyal Trump supporters have lost hope for America and fear that even if the president wins four more years, it will not matter. To make matters worse, some supporters don’t even have clarity as to what the president’s 2020 message is.

I would like to suggest that it is time for the president and his campaign crew to start to Think Big! That was the title of one of Mr. Trump’s books, written over a decade ago, and one that had a profound impact on me. The premise of the book, the line that resonated with me, was, “As long as you’re going to be thinking anyway, Think big!”

This is exactly what candidate Trump challenged America to do in 2016. He struck a chord then and tempted Americans to dream of a better future as Ronald Reagan had done decades before. I have met thousands of people who voted for the first time in their lives in 2016 because Donald Trump captured their imagination and shared a vision for America they had not previously seen.

So, while the campaign slogan for 2016 was “Make America Great Again,” allow me to offer a variation for 2020: Make America Dream Again!

To that end, I offer some suggestions for a platform that might inspire such dreaming:

Parents are worried about their kids’ future. They fear their children will become the next generation of arsonists and thugs, unpatriotic, and lacking in regard for our country.

Many parents, particularly in these difficult times, are overwhelmed by the daily stresses of life and are barely keeping it together. They have very little remaining energy left at the end of the day to teach their children history or inspire them to love America properly.

The recent rioting and vandalism taking place across America offers an opening to counterattack and turn a negative into a positive. The president can point to the attempts to erase our nation’s history by telling parents, “we will get our kids to love our country again!”

Midwestern parents, in particular, will respond to this kind of message. This will be a declared culture war against academia that for decades has been teaching from a curriculum that “cancels” America while touting globalism.

Promote a gap year, before entering college, to serve in an American domestic peace corps to solve problems in our country

We need a new call to voluntary service in America. When I speak to audiences there is a massive enthusiastic response whenever I float the idea of having young people serve their country for a year before entering college.

I believe that if we can create a national gap year program for 18-year-olds across the country to help us tackle poverty, opioid addiction, and other problems we can focus on fixing America’s structural challenges. This concept has been floated by others and I believe it would receive broad support.

When you poll Americans and ask them if they want to be dependent upon other nations for our critical economic components, they consistently respond 4-to-1 across party lines with an emphatic “no!”

A “Marshall Plan” should be launched to produce medicines, oil and gas, critical technology, and other key supply chain components here at home, making America as self-sufficient as possible. The Chinese coronavirus demonstrates how our adoption of Ricardo’s comparative advantage places us at a national security disadvantage.

President Trump should announce a 24/7 war room designed to address urban conflict and crime. Cities such as Chicago are allowing the slaughter of their citizens in the streets.

A centralized action plan to address the problem would show Americans that Trump is willing, within his constitutional bounds, to step in and take charge where local leadership has failed and to call out that failed leadership. Citizens of the most violent neighborhoods would positively respond to this position.

In places where crime “succeeds,” schools fail. Schools in cities like Baltimore should be staffed with federal personnel if necessary to help teach kids to read and write. Too many children are being “left behind” by local teacher’s unions.

These two ideas pair nicely with the criminal justice and opportunity zone victories of the past few years.

The president should set the ambitious goal of cutting the number of fatherless homes in America by half. We should not tolerate kids growing up without fathers and we should no longer subsidize the practice in perpetuity. Polling suggests this issue is a winning one in Midwestern states.

The president should develop a set of policies that make it easier to form new families and that encourages those families to have children. With a total fertility rate of 1.74 children per woman—the replacement rate is around 2.1—America needs more kids. While virtually every regular citizen agrees with the importance of family, almost no politician dares to speak of it.

The Democrat Party will not support the traditional family, making this free-range for the president.

America is resetting. Many of the president’s economic and cultural accomplishments from the past few years have been erased by the virus and riots. It is now time to reach deep inside the American soul to where aspirations dwell.

As an example, when the president spoke to a Students for Trump audience this past week (a special project of Turning Point Action), his two loudest applause lines were “We are going to Mars,” and “ Space Force is created!” It made the students feel like they were embracing the unique and decidedly American frontier spirit.

It is time for Americans to think big. I ask you, Mr. President, to ask every citizen to make America dream again. As much as your reelection campaign could use the theme, our nation needs it now more than ever.

So – what’s your best idea on how to Make America Dream Again?  Let me know on the TTP Forum.