It was time once again to have a couple of Glen Moranjies on the rocks at the Cosmos Club with my friend Larry. It’s on Massachusetts Avenue in DC, across the river from where Larry works in this very large five-sided building.

“You heard what the Vice-President said last night, right?” he asked. Since this was rhetorical, I let him continue. “Sure, his put downs of the Breck Boy were great, but this is the sentence to key in on:

The biggest threat we face today is the possibility of terrorists smuggling a nuclear weapon or a biological agent into one of our own cities and threatening the lives of hundreds of thousands of Americans.

“There is simply no doubt that Cheney is right. The question is what can we possibly do about it?”

“What comes up for me,” I replied, “is Bush’s strategy of playing offense, not just defense. His main argument for the war in Iraq – which obviously I agree with – is taking the fight to the enemy, not hunkering down in Fortress America. As he says, ‘We’re fighting the terrorists there so we don’t have to fight them here’.”

Larry gave me a funny look and invited me to go on.

“So the question is,” I continued, “how can we go on the offensive against nukes smuggled into our cities? We can blow up Iran’s facilities – and we’d better do that fast. But that’s not the problem here, which is the acquisition of already-existing nukes – say, Russian small atomic demolitions or ‘suitcase’ nukes. If one of these were detonated in downtown New York, it would make September 11 look like a stubbed toe. Maybe there’s a way to play the MAD game with the Moslems.”

There was something very self-satisfied about Larry’s smile. “Great Scotch is always the best accompaniment to great conversation. How would we play such a game, Jack?” he asked.

“Well, the Soviets had thousands of nuclear missiles aimed at us – and the only thing that prevented their use was the infamous strategy of MAD – Mutual Assured Destruction – since we had thousands of missiles aimed at them. We had no desire whatever to wipe Moscow and other Soviet cities off the map – but we could, and so nukes were never used during the entire Cold War. We’ve got to have, I think, a similar strategy with Moslem Terrorists.”

“But for such a strategy to be effective there has to be a target,” countered Larry. “The Soviet Union was in one geographical location with specific targets of extreme value to the Soviets such as Moscow. This isn’t the case with the terrorists who are spread out all over the place. You can’t target them geographically.”

“Yes, you can,” I argued back. “All terrorists who threaten us with a smuggled nuke attack have one thing in common: they are Moslems, rabidly, fanatically Moslem. They may be all over the planet individually, but there is one specific geographical target of such extreme value to all of them in common that its threatened destruction could be a sufficient deterrent. A deterrent of such horror that they would not risk blowing up an American city with a suitcase nuke.”

“And what would that target be?” asked Larry.

My answer was one word. “Mecca.”

“Of course I’m serious,” I replied. “Do you think the terrorists aren’t?”

“Ah, Jack, I’m just yanking your chain,” he chided me. “We’ve read your briefing papers on this – the ones you wrote three years ago.”

“And in those three years since September 11, it could be possible that we took those suggestions of yours and… improved them.”

Good grief, do these guys know how to set a hook. All I could do was relax and let him reel me in.

“The threat we’re talking about is not some Islamic ICBM, it’s a nuclear bomb weighing a few dozen to a few hundred pounds, small enough to smuggle and be hidden in one of our cities,” he explained. “So, what if – and this is just pure speculation, a thought experiment – we did the same? What if there already is a small undetectable nuke hidden in an undiscoverable location in Mecca? It’s just as easy to smuggle something into Saudi Arabia as it is to the US – especially if it’s by a Delta Force team who speaks colloquial Arabic and can quote half the Koran.

“Remember, this is just speculation, but to continue the thought experiment, let’s say it’s a W-80 warhead from a cruise missile. It weighs 290 pounds, about a foot wide, 2½ feet long, and can be variously configured to have a yield of anywhere from 5 to 150 kilotons. The “Little Boy” that was dropped on Hiroshima was about 15 kilotons. The W-80’s yield would have a blast radius configured to incinerate all of Mecca. The “pit” is made of supergrade weapons plutonium which has a half-life of 24,000 years, rendering Islam’s holiest site an uninhabitable radioactive hole in the ground for a very long time.

“The W-80 is part of the US ‘enhanced stockpile’ and approved for ‘refurbishment’ by the Nuclear Weapons Council in 2001. That includes new neutron generators, redesign of the electrical system, and replacement of various components.

"So let’s further speculate that one of them was custom refurbished. The protective casing allows zero radiation leakage so it’s undetectable. It’s equipped with a signal recognition system that responds only to a single, very specific, complex digital code sent by a ‘unique signal generator’ from a satellite. Spoofing signals or noise and other interference will not cause arming. Once and if – only if – the signal is received, the W-80 detonates.

“Terrorists need to know, Jack, they are screwing with the wrong people. We nuked Hiroshima and Nagasaki with no regrets and no apologies. These terrorist pigs need to know if they nuke us, Mecca will cease to exist. All it will take is one instantaneous satellite signal. Now – is that MAD enough for you, buddy?”

Needless to say, I ordered another Glen Moranjie.

“I must admit I never thought of that one,” I finally stammered. “Not needing to decide to launch something, but it being already there, buried and signal-ready. That’s some kind of improvement.”

“We thought you’d be impressed,” Larry gloated. “Of course, I haven’t confirmed anything. You and I are simply having a speculative conversation. It’s important, though, that the Islamofascists wonder about this, wonder if this is only a thought experiment… or not. I’m not saying this is true. I’m saying it might be true.”

“How will you get them to wonder?” I asked.

“They’ll get the word, through a variety of channels,” was his answer. “Why do you think I’m talking to you about it?”

Larry then went back to his office in the E-Ring while I sat in solitude musing about what I had just heard. What a concept, I thought. There lies an ultimate deterrent, hidden and inert, not a threat to anyone or anything as it silently lies there waiting for a signal that may never – and hopefully will never – come.

Yet the image of what lies buried somewhere in their Holy City could indeed cause an Al Qaeda maniac to ask himself, “Is my hatred for America and the destruction of one of its many cities worth the obliteration of the most sacred place on earth?”

What lies buried is Ultimate Deterrence. Here’s what it looks like: 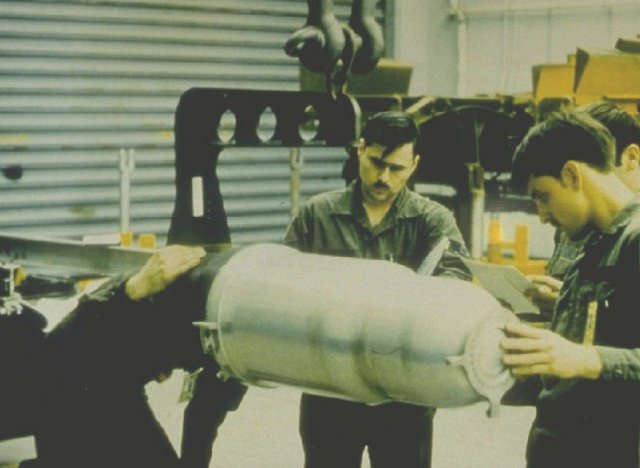