KYLE RITTENHOUSE AND THE FALSE NARRATIVE 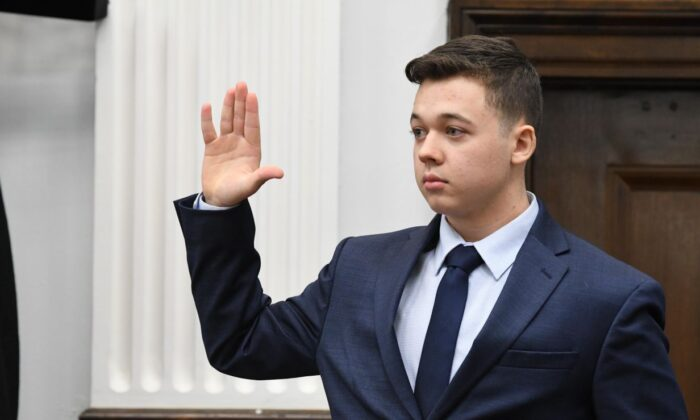 So is the narrative that the media has been peddling for months, not just about Rittenhouse, but also about many other things: President Joe Biden’s Afghanistan catastrophe, the open southern border, runaway inflation, government persecution of political dissidents, coordinated censorship between the Biden administration and digital platforms, and the list goes on.

For me, the unacknowledged heroes of the Rittenhouse case are the intrepid videographers who were on the scene recording what was taking place on the street. Without them, Rittenhouse would probably be facing a real risk of being convicted for double murder.

Why? Because he’s dealing with a dishonest prosecutor, who doesn’t hesitate to say things he knows are misleading; dishonest detectives, who don’t hesitate to twist the truth; and a dishonest media, which has been brazenly lying about what happened between Rittenhouse and his combatants for a whole year.

Let’s begin with a detective, who was asked about how the three men whom Rittenhouse shot—Joseph Rosenbaum, Anthony Huber, and Gaige Grosskreutz—came into contact with him. Here, we can go to the videotape, which clearly and unmistakably shows Rittenhouse being chased by a group of people, shouting, in effect, “Let’s get him.”

Yet the detective pretended that this isn’t what happened. No, Grosskreutz wasn’t chasing after Rittenhouse. Rather, he was merely running in the same direction (first 30 seconds of the clip).

If you read media accounts of the confrontation, you would get the clear impression that it was Rittenhouse who was chasing Rosenbaum, not the other way around. For anyone reading these accounts, it would seem that the men were minding their own business when Rittenhouse decided on his own to hunt and gun them down. Nothing could be further from the truth.

Yet, if we didn’t have the videotape, we wouldn’t know this. In that case, all we would have is the word of the prosecutor and the accounts of the journalists. This recognition has implications beyond Rittenhouse.

It might help to explain why the Biden Department of Justice is withholding the 14,000 hours of footage of the Jan. 6 incursion into the Capitol.

Defense attorneys for the defendants say that the government is charging protesters with assaulting Capitol Police while the video evidence would clearly show that it was the police who assaulted the protesters, striking them and firing tear gas and pellets into the crowd without any provocation whatsoever.

Let’s now turn to the Rittenhouse prosecutor, Thomas Binger, whose operating premise seems to be that Rittenhouse had no business being in Kenosha. Here, Binger was merely echoing a theme that the media had been promulgating since the beginning of the case. I regularly see it blasted across social media.

Yet the people who ask what Rittenhouse was doing in Kenosha never seem to pose the same question of Rosenbaum, Huber, and Grosskreutz. Why did those three show up that day?

Binger posed to Rittenhouse the question of what business he had being in Kenosha. Rittenhouse said he came to protect people. Binger suggested that rioting, looting, and arson were no big deal. Let the police handle it, even though the police were manifestly not handling it.

How strange to see an assistant district attorney, a supposed protector of law and order, say in effect that all the Antifa and Black Lives Matter types were doing was rioting.

Just rioting! Evidently, Rittenhouse was expected to ignore it and stay away. But when asked about his relationship to Kenosha, Rittenhouse coolly noted that his dad lives in Kenosha. So, as it turns out, do several of his other relatives.

So he wasn’t, as prosecutor Binger insisted, a “chaos tourist” who crossed state lines simply looking for trouble. He was literally protecting a community that he could call his own. Prior to Rittenhouse disclosing this, none of the innumerable media accounts I scoured about the case mentioned it.

Yet under cross-examination Grosskreutz admitted that he was carrying a gun in his right hand and that Rittenhouse only shot him when he pointed the gun directly at Rittenhouse.

This, under the law, is called self-defense. Rittenhouse, aided by the video evidence and some very capable counsel, has made an excellent case for self-defense. The prosecution has looked, for the most part, ridiculous. It’s genuinely entertaining to see the faces of the hosts on CNN and MSNBC, not to mention the journalistic purveyors of lies that they routinely feature as guests and expert commentators, as their public prevarications have come crashing down.

So what now? The prosecution, evidently realizing the jig is up, seems to be going for lesser charges, possibly second-degree murder and more likely reckless endangerment of others. I hope they get nothing. I hope that Rittenhouse walks. It will be a just rebuke of a dishonest system, abetted by a dishonest media.

Not that I expect the media to repent, or learn. They will simply declare the outcome a triumph of white supremacy. This, of course, would be another lie, but at least a lie that didn’t produce another injustice, that didn’t cost a young man who merely defended himself his life.

Dinesh D’Souza is a bestselling author and award-winning filmmaker. His political documentaries “2016: Obama’s America” and “America: Imagine a World Without Her” are among the highest-grossing political films of all time.