KHASHOGGIMANIA AND OUR ISLAMIST MEDIA 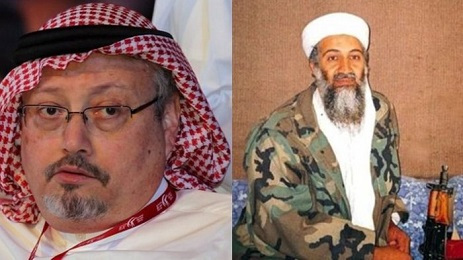 Iran kept him in one of its worst prisons, he slept on a damp concrete floor, was denied medical treatment, experienced hallucinations due to sleep deprivation and was abused by his captors. His wife was told that her legs would be cut off and her husband would be thrown off a cliff if she didn’t confess.

While Jamal Khashoggi has often been misidentified as a Washington Post journalist, all he did for the radical leftist paper owned by Amazon’s CEO is write editorials promoting the Muslim Brotherhood agenda.

The Muslim Brotherhood leader and former Bin Laden pal was never a journalist. The closest he came to it was acting as a terrorist propagandist in Afghanistan, glamorizing Osama bin Laden.

And yet the arrest and abuse of Jason Rezaian didn’t touch off a fraction of the outrage from his own paper as the death of Jamal Khashoggi at the hands of the Saudis. The media went through the usual formal protests, but the outrage was muted and there was no talk of sanctions. Instead, Rezaian, along with some other hostages, was illegally ransomed after two years by Obama for $400 million.

The media did not vigorously campaign to break off relations with Iran, as it now is with Saudi Arabia.

It didn’t push too hard out of fear of spoiling Obama’s dirty nuclear deal with Iran’s terrorist regime. And even the arrest may have taken place, according to some sources, because of Rezaian’s closeness with some regime figures.

The New York Times showily announced that it was suspending its pricey Saudi tours over Khashoggi, but it never stopped its Iranian tours, not over Rezaian’s imprisonment, or the killing, torture and rapes of Iranian protesters.

The Washington Post rolled out a special Jamal Khashoggi edition, but there was no special Jason Rezaian edition. There were fewer news stories about Rezaian’s imprisonment after two years than there have been after a week of Khashoggimania. The Post and the rest of the media did far less for Rezaian, one of their own, than they were willing to do for Khashoggi, a shady Islamist activist.

The answer has everything to do with the media’s political agendas. It is not concerned with human rights. And it’s even less interested in freedom of the press. It has no principles, only allegiances.

The media will always favor Islamist movements over non-Islamists.

The media underreacted to Rezaian’s arrest because it supported Iran’s Islamist government. It overreacted to Khashoggi’s disappearance because he is an Islamist leader. And under Mohammad bin Salman, the Saudis, once the hub of regional Sunni Islamism, turned against the Muslim Brotherhood.

The media is raving against Mohammad bin Salman because he opposes Iran and the Brotherhood. It repeats every piece of propaganda from Turkey and Qatar because they back the Muslim Brotherhood.

If the Saudis turn around and support the Muslim Brotherhood, the media will happily let them kill as many reporters, journalists, hacks and pundits as they like. The media does not care about human rights. It cares only about the triumph of Islamist political movements and it will tell any lie on their behalf.

The scandal of the Khashoggi case is not whatever the Saudis or anyone else did to Osama’s old friend. It’s that the Washington Post provided space for a Muslim Brotherhood leader to push the agenda of America’s enemies, and is colluding in a political campaign to overthrow the Saudi government.

The Washington Post is not “investigating” Khashoggi’s death, it’s spreading smears from the Turkish regime’s pet media while pressuring American lobbyists to drop the Saudis. Khashoggi’s death is just another tool for implementing regime change in Saudi Arabia and replacing its king with another ruler who will return the oil power to its usual stance of supporting Islamic terrorists and fighting Israel.

That’s what Khashoggi wanted. It’s what the Washington Post and the rest of the media want.

The truly disturbing thing is not Khashoggi’s death. It’s his life. Khashoggimania exposes an alliance between the media and the Islamists. Human rights is the cover for this red-green alliance, just as it was in the Iranian Revolution and the Arab Spring.

The differing media reactions to Khashoggi and Rezaian, parallel the differing reactions to the Green Revolution and the Arab Spring, to human rights abuses in Egypt under Morsi and under Sisi, and in Turkey under military rule and under Erdogan.

There is a consistent pattern, not of human rights principles, but of Islamic expediency.

The media will occasionally report on human rights abuses by Islamists. But it will do so in a cursory fashion, without incendiary outrage or calls to action. It’s only when reporting on Islamist protests against non-Islamist regimes that the media will shift from being bystanders to becoming activists.

Saudi Arabia is only the latest to fall afoul of this ubiquitous double standard.

When the Saudis were sponsoring Islamist terrorists, including Al Qaeda, we were repeatedly lectured on the importance of maintaining relations with them in order to liberalize them. But once the Saudis actually began making some small steps toward liberalization, the media wants to break ties with them.

Like Khashoggi, the media does not want actual liberalization. When Khashoggi talked about democracy, human rights and freedom of speech, he meant those as political tools for a Muslim Brotherhood takeover. And then, just as in Erdogan’s Turkey or Morsi’s Egypt, they would end.

Khashoggimania has proven beyond the faintest shadow of a doubt that the media thinks the same way.

When the media wanted Saudi Arabia to liberalize, it didn’t mean women driving cars. It meant just enough political liberalization to enable Khashoggi and the Muslim Brotherhood to take over.

The media wants to do to Saudi Arabia what it did to Iran, and what it did to Egypt. When the media talks about, “liberalization” in the Middle East, read it as, “Islamization.”

The media did not form an alliance with Islamists of its own accord. Its pro-Islamist agenda is not the work of mere lobbyists, as some have claimed in the past, otherwise the Saudis would be riding high.

Khashoggimania casts light on a deeper alliance between the red elites of America and the green elites of the Middle East, between Qatar, Turkey and Iran, and between a radical establishment in America.

Both the red and the green elites fuse revolutionary ideological movements with state power. Our red media echoes the conspiracy theories and talking points of the green media of Turkey and Qatar. Neither are a free or independent press in any truly meaningful sense of the term. The Washington Post and Al Jazeera are just two sides of the same coin. Khashoggimania is a shared regime change operation.

Every Islamist regime change operation has been advanced under the guise of human rights. It’s time that we stopped being fooled by the same lies, and started asking some hard questions. After the Iranian Revolution and the Arab Spring, those questions are more urgent than ever.

The media has spent the better part of a year regaling us with conspiracy theories about foreign collusion. Why is it colluding with the Muslim Brotherhood on regime change operations by lying to Americans, just as it did in Egypt, Libya and Syria, and how will it be held accountable?