2 The Point News » Keeping Your Sanity » KEEPING YOUR SANITY XXVII 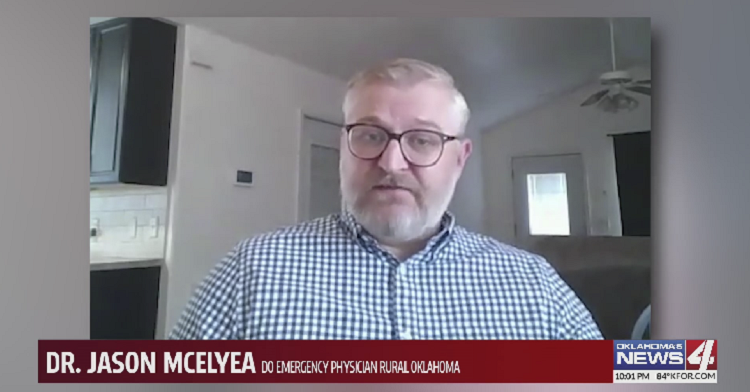 Quack doctors are a particularly despised species of proto-hominids.  The one pictured above made headlines around the world last week claiming people overdosing on a horse medicine were overwhelming hospital emergency rooms in rural Oklahoma.

It turns out that this quack completely invented the story whole cloth, yet it suckered the entire Global Libtard Media.  This afternoon’s (9/06) Fox headline: Rachel Maddow, Liberal Media Figures Slammed For ‘Taking The Bait’ On False Story About Ivermectin Overdoses.

This is beyond weird.  This is an unverified story of about horse medicine in small hospitals in rural Oklahoma that goes worldwide.  WTH is going on here?

The proximate answer is that the local KFOR news station got suckered by McElyea on its late evening  broadcast because that morning (Wednesday (9/01), the AMA issued a warning not to use the “horse medicine”:

“The American Medical Association (AMA), American Pharmacists Association (APhA), and American Society of Health-System Pharmacists (ASHP) strongly oppose the ordering, prescribing, or dispensing of ivermectin to prevent or treat COVID-19 outside of a clinical trial.”

But why would the AMA, along with the FDA and CDC, declare war on a medicine that its inventors (William Campbell and Satoshi Omura) won the Nobel Prize in Medicine for in 2015, that is on the WHO List of Essential Medicines for Humans, that is used safely by uncountable millions all over the world?

The very same question could be asked of any medication, such as hydroxychloquine (HCQ), that prevents and/or cures China Virus (aka covid) infection.

The answer seems inescapable:  governments around the world look upon this China flu bug as Fascist Manna from Heaven providing their dream rationale to control people’s lives.  After all, why else does most anyone work for a government?  Capable, competent, decent people in government are rare – for most all of them are earning an honest living in the private sector.  Think about it.

Whatever the answer, the conclusion is truly inescapable:  government authorities, along with the fascist media and woketard left, do not want the covid scamdemic-feardemic to end and all our lives to go back to normal.

So anything that could end it, like HCQ or Ivermectin or something that gets rid of “vaccine” spike proteins running amok all over your body while the vaccines require never-ending “booster” shots as they don’t work, must be demonized.

To cut to the chase – here’s how to use Ivermectin.

First: Don’t use Ivermectin unless you are infected.

If you get infected with covid – and it’s most effective used quickly as soon as you are – you’ll want to take about 20mg (milligrams) a day for about two weeks.  Less if you’re a small person (15 to 18mg), more if your heavier (say up to 24mg).

Understand that Ivermectin is available without prescription (for horses) and is cheap, effective, and safe – in the right dose.  The apple flavor is preferred by people I know who have horses.  It comes in tubes of paste, and the label tells you how much of the drug is in an inch of squeezed-out paste.  Do NOT take a horse dose unless you are a horse!

You can get it here without a prescription:

For prophylaxis – protection from getting the Chicom bug in the first place – consider taking a Pearson-Shaw formula called V-Guard-2. Best protection is 3 caps with breakfast, lunch, and dinner (3xday). It’s available at Life Priority Supplements – the owners of which, Michelle & Greg Pryor, are TTPers.

Here they are discussing V-Guard-2, and how it saved the life of Michelle’s 87 year-old mother when she came down with covid last December.

One last item, and that is to modify the recipe provided in Sanity XXIV for flushing out vaccine spike proteins out of your body.

It’s a full ½ teaspoon of N-Acetyl-Cysteine (NAC); a full ½ teaspoon of Glycine; and a level ¼ teaspoon of Vitamin C, with a large glass of water and some fruit juice with each meal (3xday). Get 250 gram packets of each from Bulk Supplements.  Start a week after getting vaxxed or anytime later, do this for 60 days and adios, spike proteins.

Again, the NAC is the key, as it disintegrates the 3-D structure of the spike proteins.  See: N-Acetyl Cysteine: A Tool To Perturb SARS-Cov-2 Spike Protein Conformation.

Protect yourself from this bug, and protect your sanity from the Fascist Covid Cult – for the latter is far more dangerous than the former.