2 The Point News » Keeping Your Sanity » KEEPING YOUR SANITY XV 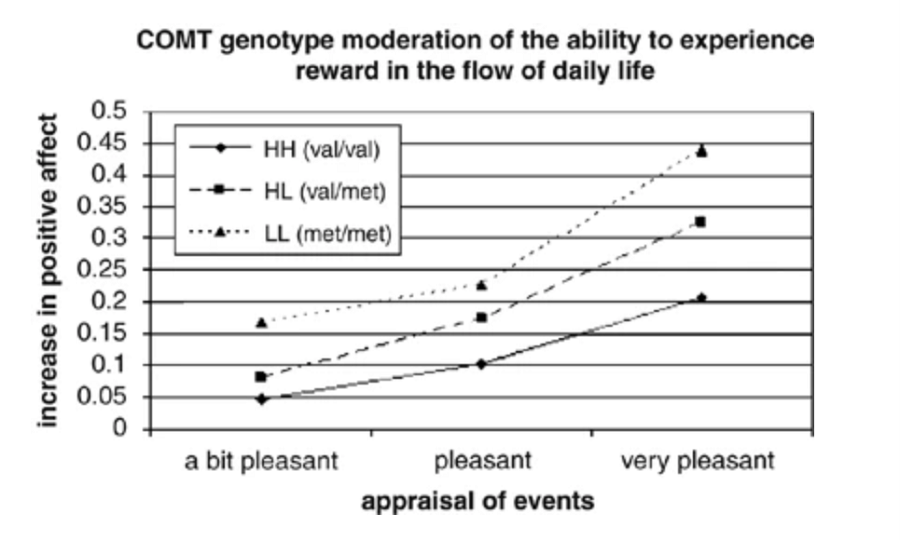 Could green tea be a major way to keep your sanity, and restore all of America’s?

As you can see in the chart above, you really want be “met/met,” as opposed to “val/met,” or worse “val/val.”  Problem is, which one you are is genetic – you have a particular gene that is one of these three.  Ah, but it turns out that an ingredient in green tea could fix the problem.  How is a fascinating story – and it began in Trinidad many years ago.

The year was 1955. Walter Mischel, a Jewish kid from Vienna whose family escaped from the Nazis to Brooklyn, was doing field work on the Caribbean island of Trinidad for his Ph.D. in psychology — and noticed the population was split between people whose families came from India and those from Africa.

By age 32, Walter was Assistant Professor of Psychology at Stanford University.  When the Stanford Psych Department launched its Bing Nursery School to research child development, Walter thought back to his days in Trinidad and came up with an experiment that was to become famous as the Stanford Marshmallow Test. 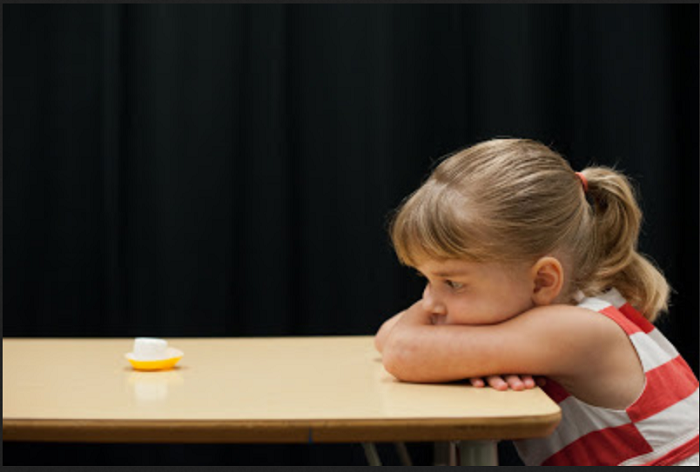 From 1968 through 1972, Walter gave the test to 653 children at Bing and elsewhere with an average age of four years old (from 3½ to 5½).  In a room with no distractions and by themselves, he placed an irresistibly yummy marshmallow in front of them and said they could eat it right now – but, that he was going to leave the room and when he came back in a few minutes, if they had not eaten it, he would give them a second one so they could eat two marshmallows instead of just one.

Roughly one-third of the children gobbled up the marshmallow within less than a minute of Walter’s leaving them alone (“low delayers”), another third lasted a few minutes then capitulated (“middle delayers”), with the last third making it all the way until he came back 15 minutes later (“high delayers”).

It was to test kids’ strategies for delayed gratification.

By 1981, Walter’s “Marshmallow Kids” were in high school, and he began sending out questionnaires to their parents and teachers asking about every trait he could think of, from their capacity to plan and think ahead to their ability to “cope well with problems” and get along with their peers – plus their SAT scores.

He learned that low delayers on average had behavioral problems in school and at home, didn’t do well academically, and had difficulty in maintaining friendships.  The opposite was true for high-delayers.  Really startling was that they had on average scored 210 points more on their college SAT tests than low-delayers (1262 vs. 1052).

But it didn’t surprise Walter.  After all, he concluded, “If you can put off eating something yummy when you’re a child, then you can study for the SAT instead of watching television as a teenager. You can end up saving more money for retirement. It’s not just about marshmallows.”

Walter and his colleagues continued to track them into their 40s (just a few years ago).  Low-delayers as adults have more problems with their weight and with drug use; with marriages, family, and friends; with their jobs and careers.

Overall, his high-delayers are in better health, have more stable marriages and friendships, accomplished more in their careers, and in general have more success and satisfaction in their lives.

Now, when a trait that shows up in a four year-old makes such a life difference, there has to be a genetic component (component, not determinant).

Researchers have focused upon a single gene called COMT.  It has the assembly code for an enzyme also called COMT, which stands for catechol-O-methyltransferase.  Its job is to clear the excess of a neurotransmitter called dopamine out of our synapses in that part of our brain where we plan, make decisions, anticipate the future, and resolve conflicts – the prefrontal cortex.

Dopamine is key to the brain’s reward system.  You want optimal amounts of it – not too much, not too little – especially in your prefrontal cortex to think clearly and rationally about your future (which can be five minutes from now).  If your COMT enzyme clears off dopamine too fast there, it’s easy to be impatient and impulsive.

Researchers have discovered two “alleles” or variants of COMT.  This involves a mutation that substitutes one amino acid (Methionine or Met) for another (Valine or Val) at one particular place in the long amino chain comprising the enzyme.  We can inherit the same variant from both our parents – so we’re either Val/Val or Met/Met – or one of each, in which case we’re Val/Met.

Here’s where it gets interesting.  Val/Vals turn out to be, on average, low-delayers.  Val/Mets are middle delayers.  Met/Mets are the high delayers.

There’s a mind-blow of a highly academic article in the Journal of Neuropsychopharmacology on the difference between the COMT alleles and “The Experience of Reward in the Flow of Daily Life.”

It takes, for example, a very pleasant experience for a Val/Val to feel the same sense of reward or satisfaction that a Met/Met gets from a slightly pleasant experience.  The Val-Met “genetic variation with functional impact on cortical dopamine tone has a strong influence on reward experience in the flow of daily life,” conclude the researchers.

The result of their research is in the chart above.  The full article title is The Catechol-O-Methyl Transferase Val158Met Polymorphism and Experience of Reward in the Flow of Daily Life.

There’s a constituent of green and white tea called epigallocatechin gallate or EGCG.  It’s not in black or regular tea as it’s converted to something else in the production process.  EGCG in therapeutic amounts has been used to treat prostate, cervical, bladder, and brain cancer; chronic fatigue syndrome; and neurodegenerative disorders like Parkinson’s and Alzheimer’s.

Now there’s research that shows EGCG is a COMT enzyme inhibitor – that is, it slows down the rapid clearance of dopamine from your synapses to Met-Met levels.

That is, you can be Met-Met – more optimistic, more enthusiastic about life, and less depressed about the woketard lunacy destroying our country (and thus more capable of focusing on your personal solutions to it) – by taking EGCG.

But how much?  The research is around 750 to 1,000mg a day in 3 divided doses, say one with each meal.  You could drink a lot of green tea, yes – but different batches from different fields yield very different amounts.  You want a standardized amount.

The one that I take personally – for EGCG is one of the many supplements I take to keep prostate cancer from coming back, not to make me Met-Met as I already am – is by Dr. Daniel Stanciu’s MCS Formulas: EGCG-80%.  It’s standardized to 320mg per cap, so 3xday gets you a solid 960mg daily.

There is a concern about too much EGCG for your liver.  What provides protection for that is silymarin from Milk Thistle.  Daniel’s Milk Thistle Extract provides 470mg standardized silymarin per cap.  2xday, 940 daily is full liver protection.

I’ve gotten to know Daniel, and consider his research and dedication to product integrity world-class.  His company ships world-wide the day you order.

Yet, as you have already surmised, the implications of all this go far beyond increasing your own personal sanity and optimism.

Drinking green tea or taking EGCG on a habitual daily basis can set your child or grandchild on a path of better physical, mental, and financial health, of greater success and satisfaction in life – especially if you suspect they might be a “low delayer.”

If we got Inner City folk, woketards, and low-delayers in general hooked on green tea, a lot of them wouldn’t be that way anymore and America would be a lot better off.

You can start with a woketard you know.  Just hype the health benefits and how much happier you feel. The more of us who “experience reward in the flow of daily life,” the more America can be America again.