2 The Point News » Keeping Your Sanity » KEEPING YOUR SANITY XIII 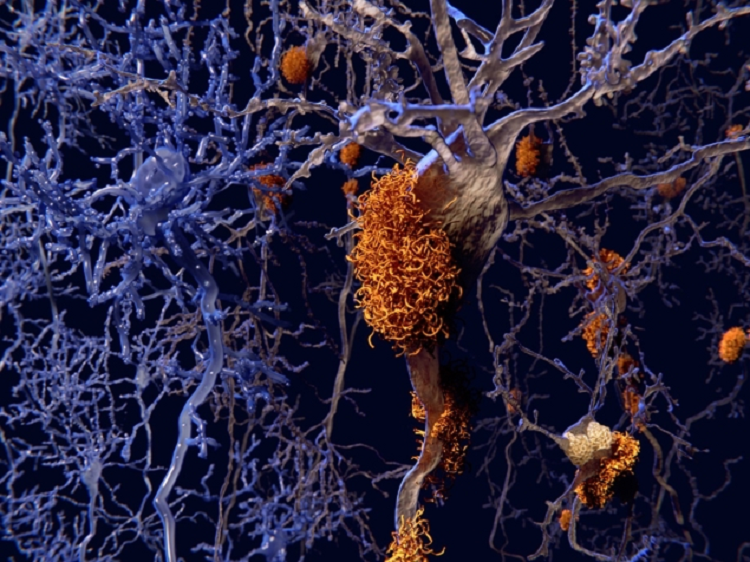 Week before last in Keeping Your Sanity XI (3/29), we talked about water.  This week, we’re going to talk about… mouthwash!

And for the same reason – to prevent what you see in the photo above:  orange blobs of amyloid plaques in the brain that cause Alzheimer’s.

As we learned in Sanity XI – “one of the most common causes of senile dementia and Alzheimer’s is chronic dehydration” – it turns out that another common cause of AD is gingivitis.

According to research conducted by University of California Psychiatry Professor Stephen Dominy — Porphyromonas gingivalis in Alzheimer’s disease brains – it works like this.

P. gingivalis is the bacterium in the mouth that causes gum disease. It can migrate from the mouth into the brain – just like a drug you take sublingually. There it produces an enzyme, gingipains, that destroys proteins critical for normal brain function called tau. This allows the development of the amyloid plaques implicated in Alzheimer’s and cause significant damage to brain neurons.

Around 50% of American adults over 30 have periodontitis (advanced gingivitis) gum disease. A substantial portion of them have a severe version, which produces P. gingivalis in vast abundance.  As Professor Dominy reports:

“Our research indicates that P. gingivalis and gingipains can directly kill neurons, damage tau, elevate levels of beta amyloid, and increase markers of neuroinflammation.  In addition, our finding of DNA from P. gingivalis in the cerebrospinal fluid of living AD patients provides further evidence that P. gingivalis infects the central nervous system.

Okay – so what to do?  Yes, you can brush your teeth and floss regularly – and certainly should.  But is that good enough to make sure you wipe out P. gingivalis bacteria hiding in deep pockets and crevices in your mouth just waiting to get into your brain and ruin it? No.

For that you need a mouthwash especially prepared to do the job.  Here’s the formula.

*Start with a liter bottle of Purple Listerine or Act that has a high (.02 to .05%) sodium fluoride concentration and contains disinfectant alcohol

*Add ½ teaspoon each of essential clove oil and essential thyme oil.  Both have powerful anti-gingivitis effects.  GNC carries them.

*Add one large tablespoon of erythritol.  Also at GNC or your local health food store. It is a safe natural sweetener that’s non-caloric with no effect on blood sugar levels.  But it does something very interesting.

It can’t be digested by us humans, and by bacteria either – but the bacteria gobble it up like crazy as they think it’s sugar, but as it’s not digested they gorge, starve, and die. Exactly what you want with P. gingivalis.

One fascinating fact about erythritol is that it’s a very effective ant poison.  Ants not only gorge on it, they lug all they can of it back to their colony to feed it to the queen, who gorges, starves, and dies.  Goodbye ant problem.  Is that clever or what?

And absolutely no worries. Erythritol is so safe it’s used at the best dental clinics as an air-polishing powder for teeth.

So – shake this mixture up until it turns cloudy, swig a small mouthful, swish it around firmly for 60 seconds, eject and don’t eat or drink anything for another 30 minutes.  Do this 4 times a day – after breakfast, after lunch, after diner, before bedtime.  Your mouth and your brain will be very appreciative.

And you’ll be keeping your sanity into deep deep old age.

Oh, you’re asking where I got this formula?  From Skye, TTP’s resident super-genius.  Once again, all TTPers are in your debt, amigo!