2 The Point News » Keeping Your Sanity » KEEPING YOUR SANITY: THE GREAT ENRICHMENT

KEEPING YOUR SANITY: THE GREAT ENRICHMENT 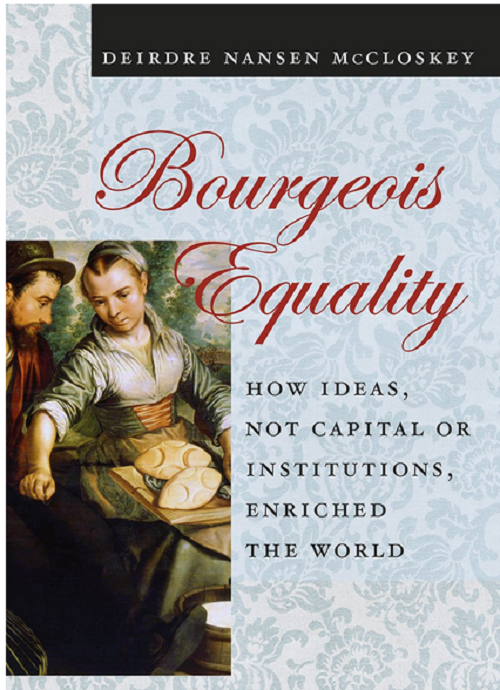 We are in the midst of remarkable times, and our relationship to money is very different because of it. Appreciating this can open up possibilities for how you think, feel and act with your money.

Today it’s hard to fully appreciate the truly remarkable conditions in which we live. For us it’s just life. For our ancestors, it would be breathtaking.

Consider that for nearly all of mankind’s existence, our ancestors lived on the equivalent of about $1-$3 a day. Imagine paying for your home, your food, your clothing, your medical needs – everything – from a total of $1,095 for the entire year/$91 per month. For us that would be dire poverty, yet that’s what our ancestors have lived on – and, until recently, most of the population on earth.

Something changed all that, beginning in the later 1600’s in Holland, and spreading and growing in England in the 1700’s and moving gradually – and then recently more quickly – throughout the rest of the world.

That $3 a day grew by a very conservative factor of 16, and more realistically, when you include the vast improvement in the quality of goods and services, more like a factor of 100 (how do you compare an iPhone, or antibiotics, with anything in existence a few hundred years ago?).

This was the beginning of the Industrial Revolution, followed soon after by what Deirdre McCloskey calls “The Great Enrichment” – which we are very much still enjoying.

Throughout history there have been times and places of improved economic conditions. But for perspective, the best that you’ll find is maybe a raising of average income to $6 or maybe $8 a day, and that never lasted for very long; and it’s still dire poverty by our standards.

Today, worldwide average income is about $33 a day, and in the wealthier countries it’s more like $100 a day or more.

So if you’re reading this, it’s very likely that the average income among everybody in your country – not just a fortunate few – is more than 30 times what our ancestors could expect to live on. Adding the incalculable innovations and improvements (those iPhones and antibiotics again), we can conservatively more than triple that.

In other words, this change since about the year 1800 is a phenomenal improvement in life for all people.

Economists and historians have searched for the difference that caused the Industrial Revolution and the resulting Great Enrichment, and they have asserted many different opinions: that it was the accumulation of capital, or property rights, or thrift, or natural resources, or imperialism and oppression… but none of these can explain it.

Why? Because each of these have been present, and often in abundance, for millennia, without leading to a great enrichment of regular people across the spectrum. It was, of course a function of innovation. But innovation itself was not new, either.

So what made the difference over 200 years ago?

Historically, innovation was largely drawn from the relatively small population of the aristocracy and the clerisy. For the vast majority of people, there was no encouragement to innovate. In fact, they were more likely to be shunned for it.

It’s hard to imagine a culture in which curiosity and innovation were shunned, where it was literally sinful for regular people to come up with ideas that could change and improve regular life for regular people. But this was common for most of mankind’s history.

And still is for any collectivist society today, from tribal to Marxist.

Deirdre McClosky’s brilliant thesis in her trilogy Bourgeois Virtues, Bourgeois Dignity, and Bourgeois Equality is that it was the sudden opening of an atmosphere of dignity and liberty for ordinary people beginning in Holland in the 1600s, that led to the Industrial Revolution and the Great Enrichment that is still lifting multitudes out of dire poverty around the world today.

It wasn’t the accumulation of capital, of imperialism, or even property rights… or innovation in itself that made this difference. It was an idea and a conversation that changed: Regular people were encouraged and given the freedom to innovate, exploding the potential for mankind’s inventiveness.

Today, we’re accustomed to a pace of innovation that would’ve made our ancestor’s heads spin.

Famine was an ever-present fear, occurring roughly every ten years or so in many places. And this has been commonplace for much of the world up until several decades ago.

We have the possibility of saving a part of our wealth that we can invest and grow – allowing our wealth to build more wealth for us while we do other things.

For us, the challenge has more often come in the form of what trade-offs we choose: do we choose short-term or long-term financial goals?

Do we take some of the money we earn and spend it on things that have the potential to work for us, and earn money all on its own – what we call investments? Do we spend all of our money now, on things we want or need? Do we spend more than we earn, take on debt from what we buy now, to be paid with money we earn later?

These are serious choices, and the wrong ones can bring financial ruin. But can you appreciate the fundamental difference between such a scenario, and those that nearly all of our ancestors faced just a few short decades ago when they had to choose between more food now or potential starvation later?

Money issues still carry with them a sense of life or death, a primal sort of anxiety that can grip us at 3 am when we realize that there’s a problem with our finances.

But if we can step back from the familiar of today and observe our situation from the perspective of our ancestors, we may be able to also step out of that primal anxiety and see how vast our own resources – and the potential for their growth – actually are.

How we approach life’s problems and opportunities can look very different when we let this sink in.

PS: My new course, Mastering Emotions, Moods and Reactions can help you with this part of your life in much greater detail, with deep understanding and practical skills for mastering these systems and living well. You can get it now with a deep discount, for $99, if you use this code: LB99.