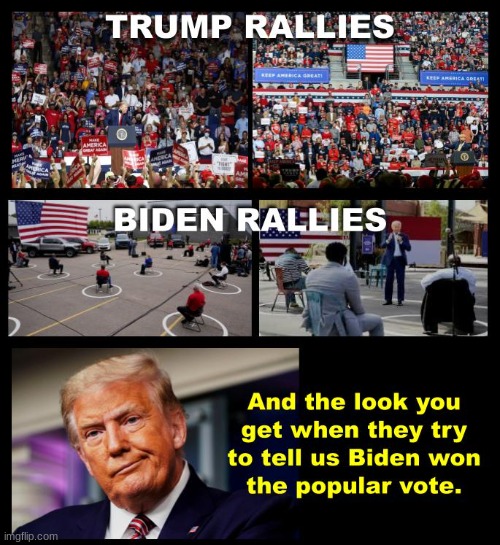 The head-to-head comparison comes from Benny Johnson, who put together a video showing Trump’s and Biden’s appearances in Wilkes-Barre, Pennsylvania.  It’s important to note that Wilkes-Barre is part of Luzerne County, a Republican-majority county.  However, that majority is not equal to, say, San Francisco County, where Biden claimed 85.26% of the votes to Trump’s 12.72% — something that’s a totally believable result if one knows that San Francisco is self-destructing because of its unopposed leftism.

In Luzerne, the vote split 56.7% for Trump versus 42.3% for Biden.  In other words, although Trump carried the day with almost 87,000 votes, over 64,000 people still supported Biden.  Both men have a lot of supporters who can turn up at their rallies.

When it comes to Wilkes-Barre rallies in 2022, the video from Trump’s rally makes it look as if all 86,929 of Trump’s voters tried to squeeze into the venue, and all the attendees are wildly enthusiastic.  Meanwhile, the video from Biden’s rally shows what looks like a debate at a high school gym when the candidates are the two pathetic losers whom no one in the school likes.  The room is mostly empty, and the energy is nonexistent:

Donald Trump and Joe Biden Both held rallies in Wilkes-Barre Pennsylvania this week.

Here is what they looked like back to back.

We can anticipate that, in 2022, which Democrats are making a referendum on Trump even though he’s not on the ballot, the Democrats will take lots of steps to ensure that any candidate who might possibly support Trump loses.  They’ll probably get help from the pooh-bahs in the Republican Party who view Trump as a threat to their power.

However, unlike 2020, when the Democrats could focus their energy on a single candidate (Trump), plus a few important Senate seats, this year, there are too many local elections for Democrats to impose a top-down victory across the board.  What will make the difference is turnout.

If Republicans allow themselves to be disheartened by polling (which no one should trust anymore), the ones who aren’t attending rallies may not vote.  That’s a sure path to defeat.  It’s a simple corollary: winners never quit, and quitters never win.

The answer for us is to do exactly what Rush Limbaugh always said: get out there and vote for the most conservative candidate who can win.  And vote in numbers that will exceed the margin of fraud.  Just remember, Trump is still filling stadiums, and Biden, with his “81 million votes,” can’t fill a high school gym.

One more thing: Remind your local GOP and/or candidate that they need to speak to voters first about the issues that matter: the economy, national security, and crime.  Then talk about how appalling Biden and the Democrats are.