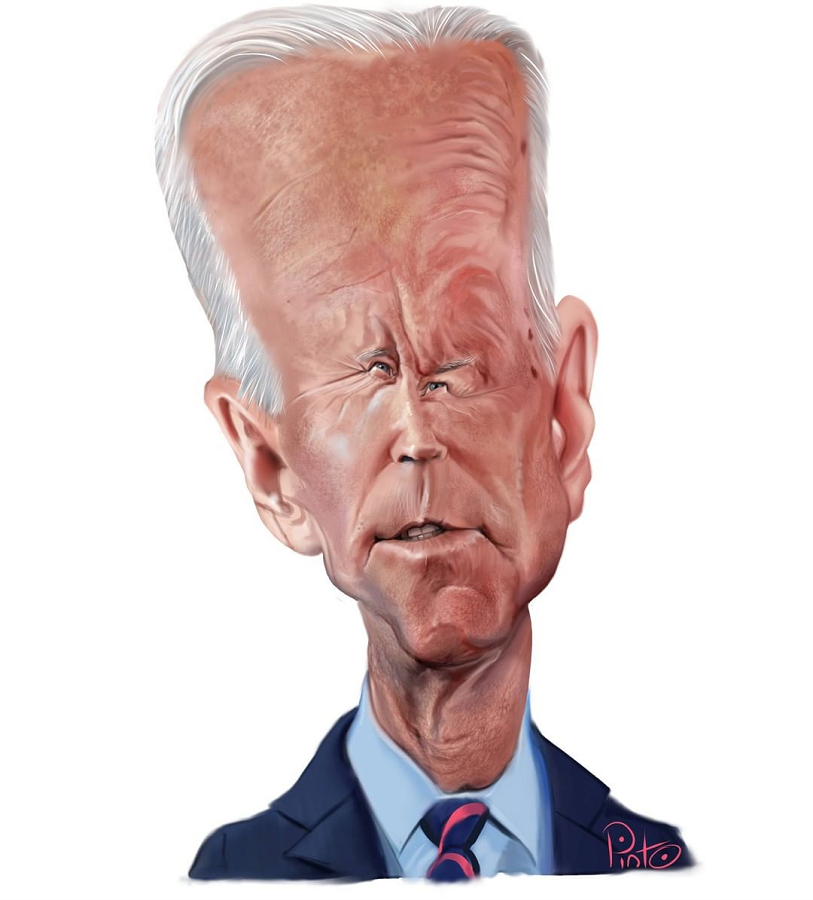 After a hundred days of Joyless Joe Biden occupying the White House, I think most Americans are now on to what will follow in the next few years.

Biden frowns. He grimaces. He occasionally barks and yells as he delivers a gloomy view of America and its people, past and present.

Admit it, he demands: We are all racists, then and now, captives of Jim Crow still. Biden needs as many fabricated enemies as he can find; otherwise, his speeches, his demeanor, his agenda are little more than absurdities. They cannot stand or fall on their own merits because they have none.

So grumpy Biden, in his latest and final incarnation, is always anti-something, usually anti-Trump, anti-racism, and anti-everything traditional America is for.

Understand, he glooms: lots of bad white people still need to be rooted out—outside of the beltway. These are the ones never woken by Wall Street, Silicon Valley, the media, academia, the corporate boardroom, professional sports, and the foundations. These retrograde deplorables apparently won’t give up their “privilege” without a fight.

Bidenism demands these environmental desecrators must stop boiling the planet. We are a xenophobic nation that won’t let pioneering migrants enter the United States. We are a Neanderthal America full of people who won’t wear their masks when vaccinated and outdoors.

We are a battered America still reeling from the Trump disasters on the border, the Trump failed coup on January 6, the Trump racism that led to peaceful equity marches all last summer.

The emerging Bidenism is what TTP warned we’d see last summer when the deceptive Left and naïve NeverTrump mantra preened that old Joe from Scranton would usher in post-Trump “healing.” His therapeutic candidacy was promised to be a “return to normalcy,” as he was a “moderate” eager to “unify” us.

This illusory reboot from Trump absolutism was to be sort of reminiscent of George H.W. Bush’s “thousand points of light” and “kinder and gentler nation” promises, as the implied corrective to purported heartless eight years of Reaganism.

(Remember Nancy Reagan’s immortal whisper to her husband as they watched HW give his inaugural speech: “Kinder and gentler than what?” –JW)

Yet all this mush ignores Biden’s innate mean-spiritedness that we’ve witnessed for 50 years dating back to his Robert Bork/Clarence Thomas hearing days, his handsy indifference to the private spaces of dozens of women, and his more recent “lying dog-faced pony soldier,” “fat” and “you ain’t black” incoherent venom.

Instead, from time to time, Joe Biden will be wheeled out to give a teleprompted address or a rare scripted press conference. The media will gush:

If he loses his way, he is “conflicted” by the sheer weight of the office. If his voice lowers in elderly fashion, he has “mastered” the technique of quiet voice emphases. If he raises it, and almost shouts, Biden is lauded as “animated,” “fired-up,” and “robust.” If his characteristic slurring of words, chopped-up syntax, and repetitions lose the audience, it is only because our modern Longinus is a master of every sort of sublime rhetorical trope.

In between those infrequent moments, scores of left-wing functionaries in the West Wing will draft and then engage in infighting over the queuing of progressive or socialist executive orders for Biden to issue. The aim for the former understudy is to out-Obama his former progressive godhead and mentor.

Biden’s Napoleonic 100 days will be remembered in the left-wing halls of Versailles as a golden moment of defiant activism. More mundanely, it is far easier for Joe to earn the wrath of Republicans than to take on the take-no-prisoners fanatics of his own woke base.

There is a constant frenzy to these near daily fiats and appointments, and for a variety of reasons. Joe is not a robust 78. He is not up to an 18-hour presidential day. His ability to rule by reclining-chair edict is about all that he has in the next 24 months—politically, physically, practically.

So Biden’s strategy is simple: nominations and executive orders. Republicans in Congress prefer losing nobly to winning ugly and so will never emulate the ‘just say no” nihilism of Democrats. Not long ago Democrats voted nearly unanimously to oppose every Trump appointee. Not now—the Senate will approve almost all of his hard-core leftist nominees, and with lots of Republican votes.

Similarly, conservative judges do not virtue signal the availability of their courts as go-to-places for conservative activist groups to expect easy court orders to delay, freeze, or overturn presidential directives.

So time is of the essence to ram through the hardest left-wing agenda in nearly 90 years, to call it bipartisanship, and to demonize any who object as infrastructure racists, climate racists, immigration racists, voting racists, and stimulus racists.

Joe does not have a mandate. He suffers from an unsympathetic Supreme Court, a deadlocked and fickle 50/50 Senate, and has only a razor-thin majority in the House. He has not yet managed to junk the filibuster.

So he can’t quite yet pack the court, trash the Electoral College, lasso in two states, or ram through an unconstitutional national voter law that overrides all the work of the state legislatures. These structural changes are necessary to ensure his pen-and-phone ephemeral governance is not erased away by a conservative successor.

Public relations-wise, Joe will continue to talk of unity and “us”—while he calls half the country Jim-Crow racists, insurrectionists, unhinged gun nuts, and all the vocabulary the woke movement mastered over the last four years. Joe will grimace as he lies that he inherited a chaotic border that, in fact, went from quiet to crazy under his watch.

He will look pained to confess that Trump was culpable for the entire COVID pandemic that needlessly killed Americans, as if any head of state is solely responsible under his tenure for all those who die from an unpredictable and insidious virus.

n truth, those are probably meaningless data points. But they become meaningful when Biden employs them asymmetrically in order to falsely fault his predecessor.

Biden never notes that plenty of European nations suffered nearly as many deaths per million of their populations as did the United States—or more: the United Kingdom, and many countries in Western Europe (Belgium, France, Italy, Portugal, Spain) and Eastern Europe (Czechia, Hungary, Poland, Romania, Slovakia, etc.).

And nations that once were touted as doing “better” than the United States, such as Russia and China, could never be trusted to present accurate data. Those who were said once to have “escaped” the pandemic far more adroitly than the United States are now mired in it, like India and Brazil.

There is no need to mention that the states with some of the highest COVID-19 fatalities per million in their populations, New Jersey, New York, Massachusetts, and Connecticut, were near religious in their adherence to shutdowns and mask wearing.

Indeed they followed almost every CDC and later Biden gyration—and freelanced too by sending active COVID-19 patients into pristine long-term care facilities. Their executives like Andrew Cuomo were deified by the press, the more so as the fatalities mounted.

Joe Biden will go into agonizing contortions as he is forced to remind us of the “vaccination mess” he also inherited. Indeed, he has claimed (“inadvertently” or “in jest”?) there were no vaccinations at all being given when he entered office (despite doing his own photo-op vaccination a full month before he was inaugurated).

What Biden will not or apparently cannot say is that he inherited from Operation Warp Speed a vaccination rate of about a million Americans per day when he was sworn in.

Indeed, when we compare the unimpressive protection and potential dangers of the Chinese, Russian, and European AstraZeneca vaccinations to their three U.S.-sponsored counterparts, it explains why the United States, after only tiny Israel, has the best record in obtaining effective, plentiful and safe vaccinations and protecting millions of its population as quickly as possible.

The effort to leverage the free market, to pay early on top dollar for vaccinations, to spread risks among three and more companies, to over-order supplies, and to offer logistic help and liability exemptions reified Trump’s earlier vow, widely ridiculed by “experts,” to start to deliver to Americans some initial vaccination relief from COVID-19 within 10 months of the outbreak.

Indeed, it is lamentable how an ungracious Biden—so reminiscent of both his earlier denunciation of the travel ban and then revisionist praise of it—appropriates or ignores Trump’s achievement, one that saved thousands of American lives.

Biden told the nation that the January 6 Capitol riot was the greatest attack on American democracy since the Civil War. He knows that is untrue and an egregious insult to the more than 5,000 Americans who perished on December 7, 1941 and on September 11, 2001.

Biden knows also that the mob of frenzies who entered the Capitol was mostly leaderless, since his own Justice Department has not found any insurrectionary or conspiratorial leaders.

There were no rioters armed with guns, much less any using them. And no one other than those in the mob suffered fatalities, of which only one death was a deliberate use of violence: Ashli Babbitt, the unarmed 14-year decorated Air Force veteran, who was fatally shot entering a window in the capital, by an officer, whose name, age, race, and sex were mysteriously never disclosed.

For such a supposedly riotous group, there were no riots over the police shooting of an unarmed suspect.

In Biden mythology, the Biden vaccination then follows from the Biden travel ban that allowed the Biden reopening of the Trump lockdown, thus ending the Trump pandemic and Trump recession, which in turn ensured the Biden recovery and indeed Biden boom.

In truth, a year of pent-up demand, of $6 trillion in promiscuously spread funny-money, of the public exuberance of a vaccination-fueled waning of the epidemic and of not yet tampering with the Trump pre-virus tax cuts, deregulation, and energy expansion, are all creating a boom.

But what will Biden say in a year when his tax hikes, new regulations, and hard-core leftist bureaucratic appointees, stifle supply as demand soars, inflation roars, and the economy slows? The ghost of Trump did it? Russian collusion? Racism?

Abroad, would that Biden follow his 100 days of characteristic plagiarism by claiming the achievement of others as his own, while fobbing his own failures onto others. That way, had he just left the Middle East be, or Trump China’s containment policy alone, then perhaps there would be a peaceful continuance.

But the “Biden plan” of resurrecting the Iran deal, of pumping up the deflated theocracy in Iran, of restoring to the Palestinians veto power over the wishes of 600 million Arabs in the Middle East, of alienating our allies in Egypt, Jordan and the Gulf, and gratuitously ostracizing the Israelis will not end well.

But then again, when it does not end well, Biden will call for ecumenicalism abroad and to reverse the “Trump Middle East” disaster that he inherited.

So Biden will grimace and contort, as he calls for unity, to rally the virtuous against the legions of Russian colluders, racists, insurrectionists, and Jim Crow revivalists under every American bed.

All these impediments to fundamental transformation, Joyless Joe Biden must unfortunately, reluctantly, and with real remorse surveille, monitor, root out, raid, jail, confine, and smear.

All that is the Joyless Joe Biden Way.