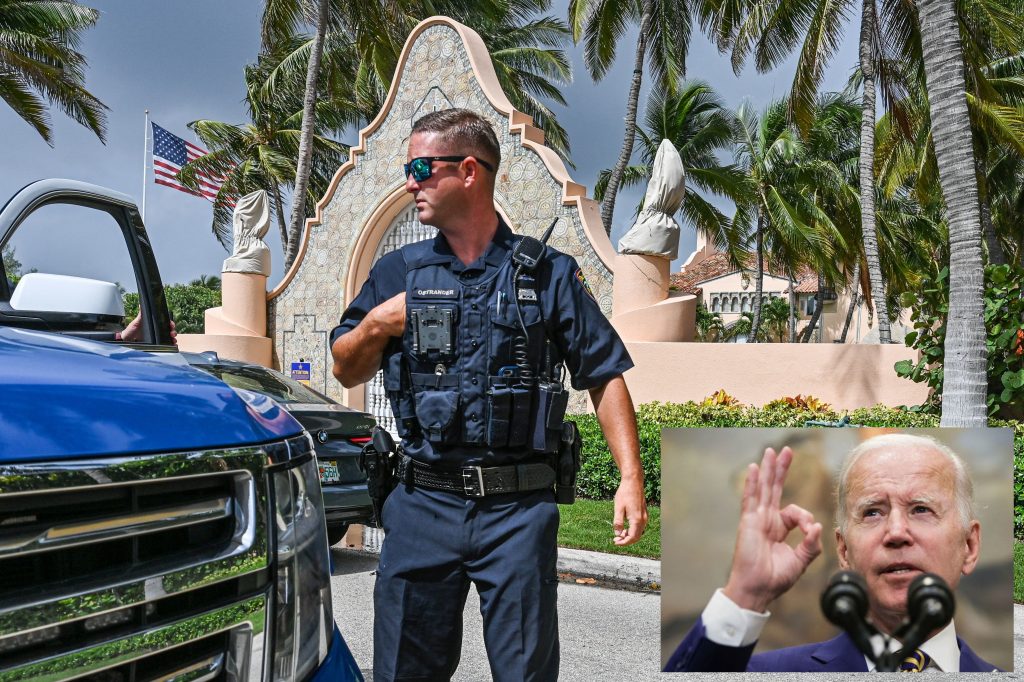 Joe Biden has made his obsession with President Trump known, most recently through his hellishly lit Mussolini-meltdown speech at Independence Hall in Philadelphia last week, manically painting Trump and all his voters as “threats to the republic.”

He may be doddering and insentient, but he still burns bright against his potential opponent in the 2024 presidential race, which even Democrats don’t want him to get involved with. On Trump, Biden’s as obsessed with Trump as Stalin was with Trotsky.

So it comes to light that not only has Biden tried to smear Trump as a danger to democracy and “threat to the republic,” in a sorry public relations campaign that isn’t working, he’s also trying to eliminate President Trump from the entire 2024 presidential race by probably the gamiest maneuvers ever played by a politician in U.S. history.

It turns out that Biden was behind the raid on Trump’s home in Mar-a-Lago on August 4.

According to the Conservative Treehouse, boldface added:

Page #2 and Page #3 of Judge Aileen Cannon’s ruling cites a quote from the DOJ own legal filing, dated May 10th, that Joe Biden ordered the National Archives and Records Administration to provide access to the FBI to review the Trump records.  Note the quotation marks:

On May 10, 2022, NARA informed Plaintiff that it would proceed with “provid[ing] the FBI access to the records in question, as requested by the incumbent President, beginning as early as Thursday, May 12, 2022.”  [citation]

What ratted that little detail out was Judge Aileen Cannon’s agreement to the appointment of a “special master” to go over the documents confiscated by the FBI in its dramatic Mar-a-Lago raid on Trump’s personal residence. The request was made by President Trump, and was a reasonable one, given the fishing expedition nature of that FBI raid, which scarfed up tax documents, medical documents, passports, and nearly two thousand utterly unclassified newspaper clippings.

It involved agents rifling through President Trump’s 16-year-old son’s room, tossing its contents, and agents pawing through all the garments in former first lady Melania Trump’s personal closet, leaving it a shambles, with some reports out there that the agents made time to take selfies of themselves with the property in these personal premises. If such reports are true, then my, my, didn’t they have fun on the job that taxpayers were paying them for?

Conservative Treehouse has a good explanation of the exact rationale here.

More than just an indiscriminant document dragnet, (which violates President Trump’s Fourth Amendment rights against unreasonable searches and seizures), the judicial ruling also was a reasonable decision based on Cannon’s notation that the “filtering” system had already failed in that documents that investigators had no right to had already fallen into their hands. Secondarily, in a case which is supposed to be all about the government’s right to keep secrets, the material had begun leaking out from the Justice Department to prejudice the public already, which makes a mockery of the government’s “concern” about secrets. It’s the old Adam Schiff-style ‘I get to leak and you get to stay silent’ as I conduct my kangaroo trial against you in secret, serving as investigator, judge and jury all at once. ‘Fairness’ is for the birds.

And Cannon did note that her move was to ensure “at least the appearance of fairness” in her ruling.

What’s come out now in this special master appointment is that Joe Biden knew about the raid on Trump’s residence all along. Based on the stated quote above, it’s likely he planned it.

So while Joe goes on those persistent Rehoboth Beach vacays, out in Delaware, away from any White House records about who he’s meeting and seeing and conferring with, we can pretty well guess that plots against Trump may well have been plotted between naked swimming pool swims, kibbitzes with his son Hunter, and that weird stuff he does with his dog in the shower.

What’s more, Biden lied about not knowing anything about the raid, which he’d like you to believe is just lawmen enforcing the law without fear or favor.

Here’s his word as a Biden:

That claim to probity might have worked two years ago, but in light of the FISA warrant abuses, the FBI plotting against Trump through the “insurance policy,” the FBI protection of Hunter Biden from any scrutiny despite his obvious corruption, and James Comey’s plotting (and leaks and stealings of classified documents for the ’cause’) that picture has worn thin. Nothing those people do is not political these days, and for that, a huge majority of the public now believes that the FBI has been converted into Joe Biden’s personal “Gestapo,” according to polls.

There’s the Mussolini speech. Combine it with the crazed impeachment maneuvers. The obsession with January 6. And now there’s the politically motivated raid, brought to us all directly at the request of Joe Biden. It seems there is nothing Biden won’t do to try to stop Trump who lives rent-free in his crooked head.

What we have here is evidence that the raid was more political than anyone recognized. We saw the outlines of it, based on Joe’s history, but now we see the proof. Thank goodness there is one honest judge whose interest in fairness and truth is all it has taken to expose Joe and the sleazy, dishonest, political game he’s playing.