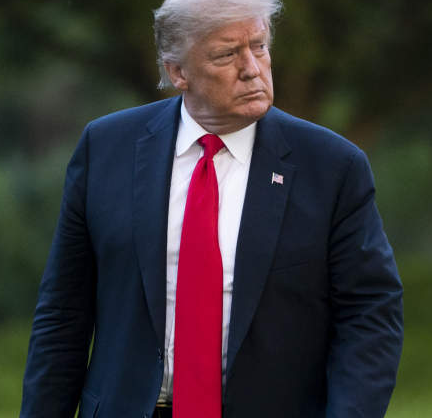 The 2020 election will be decided in the fall by swing voters in ten or 15 states.

Prior to the COVID-19 outbreak, those voters were leaning to reelect President Trump, largely on the powers of incumbency and a near-record vibrant economy.

The Democrat left-wing primary agendas, from the New Green Deal to reparations, the clownish candidates of the Beto O’Rourke and Corey Booker sort, the arrogance and meltdown of Mike Bloomberg, and Joe Biden’s cognitive impairment collectively frightened voters.

Then came the contagion, the lockdown, the recession, and the collective madness of looting and arson, which in turn led to the present anarchy of statue toppling, cancel culture, name-changing, and McCarthyism 2.0.

Of course, a president is blamed for chaos on his watch even if he did not create the chaos. He either stops it and is praised as a winner or, like Jimmy Carter during the Iran hostage crisis of 1979-1980, is written off as a loser.

What Stands Between the Public and Mob Rule?

The hour of reckoning is here and either Trump will crush the lawlessness and win the swing voters to his side, or he will listen to the trimmers [Jared Kushner, anyone?] and lose the country.

Trump’s dilemma, however, is real and in some sense unprecedented. We are in uncharted waters when blue-state officials don’t mind the violent chaos in their midst, or at least feel that in a cost-benefit analysis it serves their November purposes more than a restoration of law and order.

In our federal system, the Trump Administration cannot police Philadelphia or Seattle without calling in federal troops.

Yet our most “esteemed” retired military has already hinted that to use federal forces would be supposedly unprecedented and thus rally military patriots and bemedaled retired grandees to resist such an order—so much so that even an addled Joe Biden interpreted such a veiled warning from the military-intelligence complex as a green light.

He pontificated that if he thought Trump stole the election or wouldn’t leave in defeat (apparently defined by whether Biden believed Trump’s winning margin was fraudulent), his newfound allies in the military (who had “skinned” Trump), retired and active, would remove Trump “with dispatch.”

So if blue states don’t want federal help, and the military-intelligence complex might well oppose such an act, Trump is left with either:

*Sounding tough while carrying a popsicle stick or…

*Using the powers of federal attorneys to start indicting veritable terrorists, charging negligent state authorities with impairing the civil rights of their own citizens by knowingly exposing them to violence, cutting off federal funds to wayward states, and reclaiming federal properties within blue state sanctuary states to ensure monuments and federal buildings are safe and national parks open to the public.

If that way the Trump Administration can show the public that the federal government is restoring calm, then, at what point do these fence-sitting swing voters conclude that Trump could be the only thing between them and the Antifa/Black Lives Matter mob?

The Mob at their local suburban shopping center, or their child’s class rebooted into a reeducation camp, or their once tranquil local park now a cemetery of unburied bronze and stone corpses, or their police either defunded or in silent slowdowns?

How many times do the liberal-minded have to be slandered as “white racists” before they say “you are the racially obsessed, not me”?

For others, the question will be rephrased as:

What will markets, investors, the Chinese, the Russians, and the Iranians make of the traditional bastion of global sanity, the United States, now mired in abject madness, as it prints more funny money and Joe Biden and retired generals talk ominously of their moral right to remove or neuter an elected president the “sooner the better”?

How Much Is Too Much?

Each person, I suppose, has his breaking point. The Catholic Democrat may bolt at the desecration and destruction of anything to do with hallowed icons such as Saint Junipero Serra, a man undeniably of the 18th century mental landscape, yet whose own poverty, suffering, courage and vision outweighed the racism that he grew up with, but who is smeared now as a veritable monster by the quarter-educated.

Even the unaffiliated and apolitical may finally conclude that revolutionaries want to erase his collective memory, his history, his national anthem, and his American identity.

A Colin Kaepernick airport? Antifa Drive? Saul Alinsky’s head grafted onto the decapitated bronze of Columbus? Obama’s visage chiseled over Teddy Roosevelt on Mt. Rushmore? 1619 in our schools swapping out 1776 as the new founding of America?

Independents might have shrugged at the destruction of abolitionist statues, the defacement of the World War II monument, the graffiti on the Lincoln Memorial, and the efforts to ruin the icons of the Emancipation Monument and to topple Old Hickory—the erstwhile hero of 1950s liberals who once praised the “The Jacksonian Revolution” as the destruction of the entrenched power of the blue-blood American aristocracy.

But when you get all that daily, even as the most progressive independent fears a busy signal after dialing 911, what then?

If the Washington obelisk on the National Mall, or the Jefferson dome on the Potomac is defaced, then is there even a symbolic country left?

I think independents know that all that saves Mt. Rushmore is the cowardice of leftists who accept that driving up to South Dakota and duking it out with the state national guard, some federal officers, a no-nonsense governor, and local ad hoc volunteers is something not worth the CNN and MSNBC face time.

Still others of the disaffected traffic in video downloads of mass looting and gratuitous cruelty. The scenes that flash across the internet are sickening: stores ransacked, cars trashed, dozens of thieves nonchalantly stealing then gratuitously destroying anything they cannot find profit in.

The independent silently wonders whether he is watching a scene from Fallujah, Helmand Province, Mogadishu—or Santa Monica. There seems little difference these days.

For still others, it is again the passive-aggressive cowardice of the Antifa and the Antifa-spin-off crowd.

One moment middle-class white kids get in the face of police—often black—scream obscenities, taunt them, and yet the next, in nasal-tones, shriek like stuck pigs when the police began to march forward and push them back.

Just when you thought these anarchists were real revolutionaries who would retire to the Rockies and Sierras as maquis to continue their war on the corporate state, they seem terrified of being arrested, and charged with résumé-staining racketeering or felonious assault.

In extremis, they prove petite bourgeois careerists, not Bolsheviks on the barricades. Hollywood central casting could not have dreamed up more audio-visually off-putting characters. The distance between them and the unjustified death of George Floyd is now a vast abyss.

Weakness and Insanity on Parade

Or is the breaking point for the swing voter—the noonday press conference of the wet-noodle authorities?

Another Bill de Blasio insane moment of playing John Lennon’s “Imagine” as his city is looted and his police attacked?

Or Andrew Cuomo explaining why his orders to force COVID-19 patients into pristine but vulnerable long-term care homes that doomed thousands were always someone else’s fault—the rest homes’, the president’s, the families’—anyone’s fault but his own?

Or perhaps one has had it when listening to the pajama-girl mayor of Seattle, speaking of a fetid violent “Capitol Hill Organized Protest” as a “summer of love,” or the pajama-boy mayor of Minneapolis trying to contextualize the mass nightly murdering of young men while he jabbers about in Hamlet fashion whether to or not to defund the police?

What is the suburbanite to make of the past commentaries of Nikole Hannah-Jones, the 2020 Pulitzer Prize winner for commentary, and self-described moral architect of the New York Times’ anti-racist “1619 project”:

“The white race is the biggest murderer, rapist, pillager, and thief of the modern world…The descendants of these savage people pump drugs and guns into the Black community, pack Black people into the squalor of segregated urban ghettos and continue to be bloodsuckers in our community.”

Are supporters of redating America’s Founding supposed to shrug at all that in the current landscape, in which we are told that there is no such thing as a statute of limitations, no allowance for human frailty, no excuse for a single past racist statement?

And are we to replace the Founders with such enlightened thinking?

Are Americans supposed to take seriously the corporate leftist media, when one moment the mindless anchors are reading the same scripted Orwellian talking points about systematic NASCAR racism, the suffering of Bubba Wallace, and hyping a garage door pull-rope as if they were discussing the Dred Scott case?

And in the next Jussie Smollett moment, after the narrative is discredited, they of course move on to a Foucauldian farce, along the lines of what really did not happen, most surely could have happened, and thus in a sense did happen?

So each day, ill-defined groups of Americans silently drift into the “I can’t take this insanity anymore” camp.

The polls assure us that it is not so. The media praises the basement strategy of an addled Biden. The op-ed writers gleefully preen that Trump is through—and perhaps he could be if he stays portrayed as ineffectively dealing with the recession, the virus, and the violence.

The Choice Is Still Trump’s

Nonetheless, quiet masses will desert from the progressive narrative, if they feel someone else will guarantee their safety and security from it.

They as yet do not know always where or to what there are deserting, but they have had it with the looting, the arson, the banal “you are a racist!” empty rhetoric, the hatred, the violence, the juxtaposition between cries of inequality and poverty and the televised shots of seemingly comfortable middle-class anarchy and the looting of high-end Adidas sneakers and high-definition TVs.

Many have retreated already into their own monasteries of the mind.

By that, I mean that if the coaches take a knee in the fall, they will turn off the NFL—for good. They will not answer any more alumni summons to donate to their almae matres. Some are shopping for homes in the hills or countryside or small towns.

Others are worn out from being asked to pay ever more taxes and work ever harder, only to earn smears that they are racists, or homophobes, or somehow Neanderthals for being skeptical of socially constructed gender.

They shrug at whatever progressive stew created a wannabe Fifth-Avenue revolutionary like Alexandra Ocasio-Cortez—they don’t want any part of it. To the degree these disaffected who feel enough is enough, stay home, then perhaps Biden will win.

But if they translate their growing fury into voting for someone perceived as answering calmly and forcefully back, protecting them, and punishing those who so brazenly flaunt the law and humiliate any who call them to account, then Trump will be reelected and more easily than our experts can imagine.

Despite the tsunami of unforeseen contagion, mass quarantine, and national riot, the choice is still Trump’s: stay calm, speak softly, and carry a club, while promising for the future to protect the vulnerable of all races and classes, and restore a great nation; or talk loudly carrying a twig while whining about unfair personal treatment of the past.

The former is victory, the latter socialism, in November.