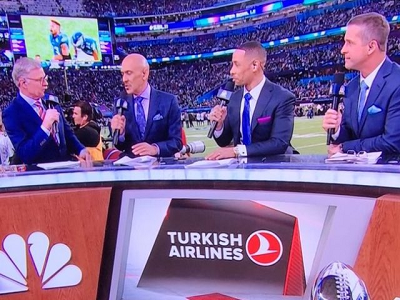 One of the stranger aspects of the Super Bowl LII broadcast on Sunday (2/04) was the Turkish Airlines sign on the NBC Sports desk during the pre-game show.

Social media posts by fans were not particularly appreciative:

NBC also ran a commercial for Turkish Airlines. Starring television celebrity surgeon Dr. Oz, the ad, like previous years’ Turkish Airlines Super Bowl ads, was an advertising work of art.  It was brilliantly written and beautifully produced. It’s hard to imagine the average viewer would feel anything other than attracted to Turkey after watching it.

There is nothing wrong with a business or civic group advertising its message. But the uneasiness the ad caused many viewers was reasonable. Turkish Airlines is not a private business. The Turkish government owns a controlling 49.12 percent of the airline. And the Turkish government is not demonstrating affinity with America, let alone with American sports, these days.

To the contrary, although it’s a member of NATO, everywhere you look, Turkey is actively harming American interests.  That’s because Turkey today is run by an Islamofascist Dictator who hates Christians, the West, and America.

That would be Turkish President Recep Tayip Erdogan, who for example has led the diplomatic onslaught against America since President Donald Trump recognized Jerusalem on December 6.

That same month, Erdogan hosted a conference of the Organization of Islamic Cooperation to criticize the U.S. and was an outspoken advocate of the U.N. General Assembly’s resolution to condemn the American move.

As John Rossomando reported for the Investigative Project on Terrorism (IPT), the U.S. deported one of the speakers at the conference, Sami al-Arian, in 2015 after he served his prison term for funding the Palestinian Islamic Jihad (PIJ) terror group.

Al-Arian operated in the U.S. from the early 1990s through his arrest in 2006. Working under the cover of his position as a computer science professor at the University of South Florida, Arian played a key role in setting up U.S.-based front groups and support networks for the Iranian-controlled PIJ in the 1990s.

He also served on PIJ’s Shura council, which governed the terror group. He formed the Islamic Committee for Palestine, which raised money for PIJ and featured PIJ terrorists as speakers at its events.

In addition, Al-Arian reportedly formed the Tampa-based World and Islam Studies Enterprise (WISE). In the early 1990s, Al-Arian secured a U.S. visa for a man named Ramadan Abdullah Shallah by appointing him to direct WISE. Later, in 1995, Israeli commandos assassinated PIJ commander Fathi Shiqaqi in Malta. Shallah departed the U.S. shortly thereafter to replace Shiqaqi as commander of PIJ. I

In 2006, al-Arian was convicted of aiding and abetting PIJ.  At the sentencing, Judge James S. Moody told the defendant al-Arian: “The evidence was clear in this case that you were a leader of the Palestinian Islamic Jihad … [which engaged in] blowing up women and children on buses…. Anyone with even the slightest bit of human compassion would be sickened. Not you, you saw it as an opportunity to solicit more money to carry out more bombings.”

After he was deported, rather than treat al-Arian as a terrorist, Erdogan’s Islamofascist government appointed him Director of the Center for Regional Politics at Istanbul’s Sabahattin Zaim University when he landed in Istanbul.

At last week’s Diyanet conference in Istanbul, al-Arian referred to the U.S. as “our enemy.” He also called on the Moslem world to boycott America for its recognition of Jerusalem as Israel’s capital.

Just a few weeks before he hosted al-Arian at his America-bashing conference in Istanbul, Erbas was in the U.S., working to mobilize Moslem groups on behalf of Turkey.

As IPT reported, the American branch of Turkey’s Religious Affairs Directorate, the Diyanet Center of America, held a reception in Lanham, Maryland, featuring Erbas. Among the attendees were the heads of the Council on American Islamic Relations (CAIR) and Egyptian-Americans for Freedom and Justice.

Oussama Jammal, the Secretary General of the United States Council of Moslem Organizations, attended the event and pledged his support for Erdogan, according to IPT.

Against this backdrop, the uneasiness and confusion expressed by many fans at Turkish Airlines’ prominent sponsorship of the Super Bowl makes perfect sense. Turkey spends hundreds of millions of dollars each year on outreach to Moslems in Western countries and in lobbying efforts.

According to a December 2016 report in Turkey’s Hürriyet daily, in the aftermath of the failed July 2016 coup to overthrow Erdogan, the Diyanet briefed the Turkish parliament on its international activities.

Diyanet leaders told lawmakers that it had gathered intelligence through imams in 38 countries in Europe and Asia on the activities of followers of U.S.-based Turkish cleric Fethullah Gulen. Erdogan blames Gulenists for the failed July 2016 coup to overthrow him.

Turkey’s efforts to co-opt American Moslem leaders are interesting for two reasons. First, they indicate that Turkey is replacing Saudi Arabia as the patron of Islamofascist  U.S. Moslems and jihadists worldwide.

From 1967 until the advent of the Arab Islamist revolutions in 2010, Saudi Arabia was the major disseminator of radical Islam worldwide. With the rise of radical Islamic political movements in the Arab world, the Saudis cut off their support for the Moslem Brotherhood and a host of Islamic terror groups.

Second, it shows that Turkey intends to use the American Moslem community as a means to propagate Turkey’s rise as the “protector of Islam.”

Turkey’s goals in the U.S. are clear, first and foremost, because Turkey has been implementing this goal in western Europe.

Last year, for example, Turkey provoked an ugly fight with Germany and the Netherlands.  In April 2017, Turkey held a constitutional referendum asking voters to give Erdogan dictatorial powers. The opinion polls were too close to call. In the weeks ahead of the vote, Turkish ministers descended on Europe to campaign in Turkish communities and urge Turkish expatriates to vote for the referendum by absentee ballot.

The German and Dutch governments reacted angrily to Turkey’s brazen contempt for their sovereignty, and barred Turkish politicians from entering their territory until after the referendum. In the event, Erdogan won by a narrow margin.

European defiance of Turkey didn’t last long. Erdogan has cultivated Turkish expatriate communities as a means to influence the domestic politics of Europe. In 2011, Erdogan urged Germany’s Turkish community not to assimilate into German society. Erdogan said, “Yes, integrate yourselves into German society but don’t assimilate yourselves. No one has the right to deprive us of our culture and our identity.”

Last year, Erdogan told Turks in Europe, “Go live in better neighborhoods. Drive the best cars. Live in the best houses. Make not three, but five children. Because you are the future of Europe. That will be the best response to the injustices against you.”

In Israel, Turkey is spending tens of millions of dollars annually to supplant Jordan as the most influential Islamic actor in Jerusalem. Turkish governmental funds are also being used to empower radical anti-Israel and anti-Semitic clerics in the Arab Israeli sector.

Yet in 2017, Turkish Airlines was the most popular foreign airline in Israel.  Slick propaganda ads work.

Which brings us back to the Super Bowl. Islamofascist Turkey uses a combination of soft power, religious indoctrination, political subversion, bullying, and terror sponsorship to expand its power and undermine the U.S., Europe and Israel.

And the Turkish Airlines Super Bowl ad is an insidious example of how this influence operation is done.

Caroline Glick is Deputy Managing Editor of the Jerusalem Post.