2 The Point News » Kelly's Panorama » Members Only » IS TRUMP FIGHTING BACK?

IS TRUMP FIGHTING BACK? 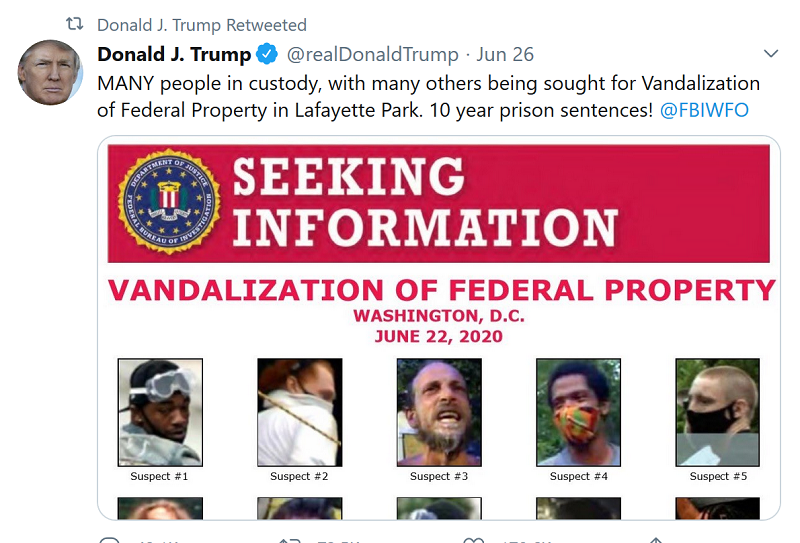 Starting to fight back

I suspect such slippage as there has been is chiefly because many older Americans share the view of Tucker Carlson and some other conservative pundits that the president isn’t doing enough to protect us from the Marxist mobs.

“If you do not protect (your people) – or worse than that, if you seem that you can’t be bothered to protect them, then you’re done,” Carlson said in a monologue after the rioting in Washington D.C.

Watching arrogant, ignorant punks and thugs loot and burn and tear down national monuments with apparent impunity fills me with rage. I’d love to see cops wade into these mobs with truncheons swinging, crack some skulls.

But as my rage subsides, I remember this is what leftists – who have visions of Kent State 1970 dancing in their heads – would like to see happen too.

Democrat mayors and governors hope to goad President Trump into over-reacting to the “peaceful protests,” in the hopes this will turn the Karens in the suburbs against him.

If the president were to, say, send the 82nd Airborne to clear out CHAZ/CHOP, the Antifa mini state in downtown Seattle, I don’t think the reaction of the general public would be as hostile as leftists assume.

But we shouldn’t provide them with grist for their propaganda mills. It’s better to outsmart them.

We should keep foremost in mind that the Lying Swine LIE. The MSM give lavish coverage to “protests” that make our blood boil… but give next to no coverage to arrests made afterward.

Many of these vandals are shocked to learn they’ll be doing federal time – up to ten years — not the slap on the wrist they’re accustomed to receiving in Democrat jurisdictions.

More than 100 “anarchists” have now been arrested by the FBI, Press Secretary Kayleigh McEnany said Monday (6/29).

It would be emotionally satisfying to see more of these bugs squashed in real time. But obnoxious as they are, they’re just pawns. It’s more important to nail those who finance and direct them. These are the people Attorney General Barr is going after.

He’ll use the 56 regional FBI Joint Terrorism Task Forces to track down those who violated federal law during the “protests,” Barr said.

“The violence instigated and carried out by Antifa and other similar groups in connection with the rioting is domestic terrorism and will be treated accordingly,” the attorney general said.

Tucker Carlson should have paid more attention in civics class.

Under our federal system, mayors and governors are responsible for maintaining public order. The president may assist.

The Insurrection Act of 1807 has been invoked six times, most recently by President George H.W. Bush, to repress the Rodney King riots in Los Angeles in 1992.

But under normal circumstances, the president may assist only when a mayor or a governor asks for his help.

This Democrat mayors and governors in riot-afflicted cities and states have refused to do. Trump can urge them to call out the National Guard (as he has often), provide advice to Chicago Mayor Lori Lightfoot on how to curb the unconscionable violence there, but his ability to force elected officials to perform the duties they’re shirking is limited.

I suspect Trump is doing more on the QT than we’ll ever know. Remember how the violence in Minneapolis and Washington D.C. stopped In one night? (I wrote last week about the mysterious email from the St. Paul police department, which suggests the feds are quietly nabbing the most dangerous baddies.)

If Antifa/BLM violence scales up, I’m confident the president will find a legal justification for stomping on them. But we must distinguish between what poses a serious threat, and that which just offends our sensibilities.

CHAZ/CHOP, for instance, poses a threat to downtown Seattle, but not to the rest of the United States. The longer the farce goes on, the more peeved people in Washington state get with CHAZ/CHOP and with the political leaders who enabled it, Mayor Jenny Durkan and Gov. Jay Inslee.

I bet that after this weekend, Mark and Patricia McCloskey, good Democrats both, are having second thoughts about their party’s positions on defunding police, gun control, and the “right” of “peaceful protestors” to come uninvited onto private property.

The “peaceful protestors” had some nasty things to say, Mark McCloskey recalled.

It wasn’t those who trespassed and made threats who did something wrong, said St. Louis Circuit Attorney Kimberly Gardner.

“I am alarmed by events that occurred over the weekend, where peaceful protestors were met by guns and a violent assault,” Ms. Gardner said in a statement. “We will not tolerate the use of force against those exercising their First Amendment rights, and will use the full power of Missouri law to hold people accountable.”

Plaintiffs’ lawyers both, the McCloskeys have been big contributors to Democrats. Especially if Ms. Gardner goes after them, I doubt the McCloskeys will be as generous to Dems in the future as they were in the past.

The woke are getting red-pilled, and not just in St. Louis. Don’t be gaslighted. The mobs they enable hurt Democrats far more than they hurt President Trump.