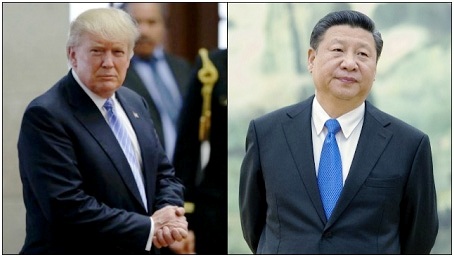 A spate of unusual reports in Hong Kong and overseas Chinese-language media lend credence to the idea that, while Xi Jinping remains China’s undisputed paramount, his authority seems somewhat diminished.

A moratorium of sorts appears to have been called on the relentless personality cult constructed around Xi, while signs have emerged that China’s economic policymaking apparatus has been hamstrung by disagreements between Xi and his top economic policymaker over how to handle a deepening trade war with the United States.

Beginning in July, various cities throughout China have mothballed portraits and display photos of Xi (such public displays of fealty are key elements of the gathering cult of personality).

The Shaanxi Academy of Social Sciences suddenly ended its research into “The Great Wisdom of Liang Jiahe,” (梁家河大学问), a reference to Xi’s innovative ideas and exploits while serving as a student in the village of Liangjiahe in Shaanxi during the Cultural Revolution.

Most inexplicably, Xinhua News Agency on July 11 ran an article criticizing Hua Guofeng—Mao’s designated successor, who was eventually outmaneuvered and removed from power by Deng Xiaoping—for cultivating a cult of personality. This could, potentially, be seen as an indirect attack on Xi, whose personality cult has begun to resemble that constructed around Mao Tse-tung (Voice of America, July 16; Ming Pao (Hong Kong), July 16; Radio Free Asia, July 12).

Reports have also surfaced that two of Xi’s closest advisers, Wang Huning and Liu He, have at least temporarily been sidelined.

Wang, who is Politburo Standing Committee (PBSC) member in charge of ideology and propaganda, has apparently taken the rap for the personality cult around Xi.

Liu, the Politburo member in charge of economics and commercial relations with the US, has been widely criticized for Beijing’s failure to negotiate a trade war ceasefire with the US (Ming Pao, July 23; Apple Daily (Hong Kong), July 20).

Stories about political troubles befalling Xi could be exaggerated. Xi recently completed a 10-day trip to Africa and the Middle East; it is unlikely he would have left the country for so long if his position were in imminent danger.

Further,  the People’s Liberation Army (PLA) is unlikely to move against Xi after a massive reshuffle of its command-and-control apparatus in late 2015 and early 2016 that saw Xi install protégés in most of the PLA’s senior roles. (China Brief, October 20, 2017).

Moreover, prior to Xi’s departure for the United Arab Emirates on July 19, National People’s Congress Chairman Li Zhanshu, a long-standing Xi confidante, coined a new way to eulogize Xi, referring to him as the “eternal core” of the party leadership.

Li, also a PBSC member, urged all cadres and party members to do their utmost to “ensure that party central authorities, with comrade Xi Jinping as their core, will have the power to yichuidingyin [call the final shots] and to dingyuyizun [settle differences with utmost authority].” (Xinhua July 17).

Xi is widely seen as failing to thwart what the Chinese Foreign Ministry calls Trump’s “hegemonic” and lingba (“bullying”) tactics. The paramount leader has, for the most part, struck back only with rhetoric, warning the Trump administration of the dire consequences of challenging China.

In a meeting with CEOs of multinational corporations in late June, Xi noted that China followed the ethos of “a tooth for a tooth”, and that it would certainly “punch back” against unreasonable American demands (Radio French International, June 27; CNBC.com, June 25).

And while touring South Africa in late July, Xi even invoked Mao’s famous line about China’s enemies—in this case the US—“lifting a boulder only to smash their own feet” (Xinhua July 26, Ming Pao, July 26).

Yet since Trump made it known that he might slap tariffs on all $550 billion worth of Chinese imports to the US, the response by CCP senior cadres and official mouthpieces has largely been one of paralysis (South China Morning Post, July 22).

Indeed, from June onwards, the response of the party-state apparatus has been cautious to a fault.

In mid-July, the CCP Propaganda Department banned media use of the phrase “trade war”, in an apparent effort to divert the public’s attention from the fact that Beijing lacks the wherewithal to respond in kind to Trump’s threats (South China Morning Post, July 14).

While Xi has arrogated decision making authority on all major economic questions, the supreme leader seems to lack the professional knowledge and expertise to function as economic czar. Reports have had him clashing with his principal economics adviser, Vice-Premier Liu He, about how to deal with the Americans.

Perhaps due to Xi’s truncated authority—and the temporary sidelining of his economic point man—there seems to be no authority forceful enough to stop internecine bickering among government departments overseeing the economy. Both Hong Kong and Western media have reported on open warfare among State Council debating how to manage an incipient economic downturn.

To remain China’s paramount leader, Xi has to address multiple threats from Washington. As US President Donald Trump indicated on September 7 that the US was preparing to levy 25 percent tariffs on $200 billion worth Chinese imports, he also warned that an additional $267 billion worth of Chinese products might also be subject to extra duties.

Beijing’s reaction has been to reassure China’s businesses and populace that the US administration’s aggressive tactics would have an insignificant impact. Those optimistic projections contrast with other officials who fear that unemployment caused by the trade war could ignite massive political disturbances. (Radio French International, August 24; Cn.routers.com, August 24).

One reason that Beijing has been reluctant to engage in talks with the Americans is Xi’s apparent decision not to adopt the relatively realistic and conciliatory policies of his erstwhile principal economic adviser Liu He, who is also Politburo member and Vice-Premier in charge of finance.

Yet Liu He, who has retained the respect of party cadres who think that Beijing should adopt a more flexible attitude toward the U.S., is only a small problem compared to the lack of heavyweight regional officials who have come out to openly support Xi.

In the past 12 months, most regional party secretaries, governors or mayors enthusiastically took part in biaotai activities as Xi moved to assume the status of hexin (核心) or “core of the leadership”, and enthusiastically signaled their approval when Xi changed the PRC Constitution in March to remove term limits for the post of state president.

This time, however, almost no regional heavyweights have come to Xi’s support. After Li Zhanshu raised the banners of yichuidingyin and dingyuyizun, provincial or mayoral leaders have seemed reluctant to demonstrate their support through biaotai.

Even more striking is that the generals, who are considered a key power base of the President’s, have also failed to openly profess their undivided fealty to the paramount leader.

Recently, Xi called a meeting of the PLA top brass on the subject of “party construction within the army.” While Xi seemed to be asking top generals to rally around himself as the unchallenged leader of the country’s military and police forces, there was a surprising lack of senior generals joining the biaotai (“show your allegiance”) ritual.

Whether Xi can come up with effective measures to handle the multi-pronged fusillades coming from the White House depends partly on whether he can shore up his threatened authority within the party. For the moment, however, it is difficult not to credit speculation that the so-called “leader for life” is facing his most severe challenge since coming to office less than six years ago.

Dr. Willy Lo-Lap Lam is an Adjunct Professor at the Center for China Studies, the History Department and the Program of Master’s in Global Political Economy at the Chinese University of Hong Kong.