2 The Point News » Guest Authors » Members Only » IS THERE EVEN A SINGLE DECENT DEMOCRAT IN CONGRESS?

IS THERE EVEN A SINGLE DECENT DEMOCRAT IN CONGRESS? 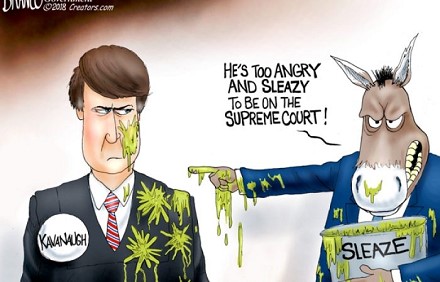 Now we know for sure.  The answer is No. There is not a single decent person among the Democrats in Congress.

Because not one Democrat has had the fortitude to stand up and admit that what they are doing to Judge Brett Kavanaugh is obscene and grossly indecent.

We must therefore admit that there is not one of them with the moral sense to know that destroying a man for politics is wrong.  It’s not only wrong, but depraved.  Not one Democrat member of the Senate, not one in the House.  Those on the Judiciary Committee are just the most depraved and venal of the lot.

Not one among the 95% of the leftist media has come to Kavanaugh’s defense.  Instead, they too are on a mission to ruin his life and keep him off the Supreme Court.

They do not report the many inconsistencies in Christine Blasey Ford’s vague account of her alleged encounter that effectively render it a lie.  NBC never even mentioned Rachel Mitchell’s report because it so seriously undermines Ford’s narrative.  It is doubtful there ever was such an incident.

The very worst aspect of all this is that the Democrats in Congress all surely know that Kavanaugh is innocent of Blasey Ford’s ridiculous accusation.  They know, and they do not care.

Cory Booker now admits it publicly – saying “It no longer matters if Kavanaugh is innocent or guilty.”

Perhaps Kavanaugh’s life has been so exemplary, so successful, that he offends them.  They loathe those of us who live by the traditional values they have long sought to upend.  We are the Deplorables who are mocked nightly by comedians who are not at all funny.

The Democrat Party has ignored or protected the many actual abusers of women among their party: Ted Kennedy, Bill Clinton, and Keith Ellison, to name just a few.  Hillary Clinton, the most self-unaware person on the planet, has a lot of nerve speaking out against Kavanaugh.  She was in charge of Bill’s “bimbo eruptions,” making every effort to ruin the reputations of his accusers.

Wouldn’t we all like to know the names of those members of Congress for whom the taxpayers have paid a total of $17M to accusers of harassment and abuse far worse than anything Kavanaugh ever did?

That the people of Connecticut keep electing Senator Stolen Valor – “Da Nang Richard” Blumenthal – is a mystery.  He lied for years about his service in Vietnam when he actually had five deferments.  He is worth $70M but earns $174K a year.

Booker, Harris, Whitehouse, Leahy, Durbin, and the rest of them are not fit to shine Kavanaugh’s shoes, and at some level in their little pea brains, they know it.

As the many lies and inconsistencies in Blasey Ford’s story emerge, the Democrats are ramping up their “concerns” over Kavanaugh’s beer consumption and the fact that he once threw ice at someone while in college.  Oh, the horror.  By these standards, not one person now in Congress could take office.

As for Kavanaugh, he was number one in his class in high school and college, so it is safe to say he was no drunk.  He was an extraordinarily well rounded young man – hard-working, disciplined, and brilliant, and he knew how to have fun.

Bottom line?  The Democrats in Congress are the most hypocritical bunch of pols to gather in one place.  While they are attacking Kavanaugh over ridiculous accusations by obviously disturbed women, they are excusing Keith Ellison and dismissing his accuser Karen Monahan for lack of evidence even though she actually has some: texts and a contemporaneous medical report.

This week, students at USC are demanding that a professor there, James Moore, be fired because he replied to a mass email that “survivors must be believed.”  He replied that “accusers sometimes lie” and that these students may have a different perspective on due process if they were accused of something they did not do.  For that, they want him gone and are holding a rally in protest.

Likewise, the Democrats in Congress no longer respect due process or the core of our system of justice, innocent until proven guilty.  Blasey Ford and her lawyers and their fellow Democrat schemers in the Senate apparently thought her vague accusation would be enough to taint Kavanaugh out of his nomination.

But Kavanaugh is made of sterner stuff.  He is like the Biblical Job: a religious man who loves his family; his country; and the Constitution, that “little book” he carries that Kamala Harris mocked.

The Democrat plan to make Kavanaugh withdraw has failed, and the Democrats have exposed themselves as the prurient, vulgar, and satanic people they are, wholly without a sense or shred of decency.  Many millions of decent people in America are praying for his confirmation.