2 The Point News » Behind The Lines » Members Only » IS THE MEDIA ABOUT TO MAKE TRUMP THE UNBEATABLE HERO OF THE CHINA VIRUS CRISIS?

IS THE MEDIA ABOUT TO MAKE TRUMP THE UNBEATABLE HERO OF THE CHINA VIRUS CRISIS?

On March 18, one of the world’s most respected science journals, Nature, published this article: Hydroxychloroquine, a less toxic derivative of chloroquine, is effective in inhibiting SARS-CoV-2 infection in vitro. (Note: SARS-CoV-2 is another name for COVID-19, the China or Wuhan virus.)

“In conclusion, our results show that HCQ [hydroxychloroquine] can efficiently inhibit SARS-CoV-2 infection in vitro. In combination with its anti-inflammatory function, we predict that the drug has a good potential to combat the disease.”

President Trump’s medical advisors quickly brought the article to his attention.  The very next day, March 19, at his White House press briefing, he brought the world’s attention to the promise of HCQ (watch starting at 2:20):

White House researchers soon discovered studies were being done on HCQ and the China virus from Bahrain to South Korea.  One in particular caught their eye.

Their clinical trial was approved by the French FDA: National Agency for Drug Safety (ANSM).

Hydroxychloroquine and azithromycin as a treatment of COVID-19: results of an open-label non-randomized clinical trial:

Despite its small sample size our survey shows that hydroxychloroquine treatment is significantly associated with viral load reduction/disappearance in COVID-19 patients and its effect is reinforced by azithromycin.”

Verifying the study, POTUS was informed.  On March 21, he issued this tweet which sent the entire Enemedia into apoplexy: 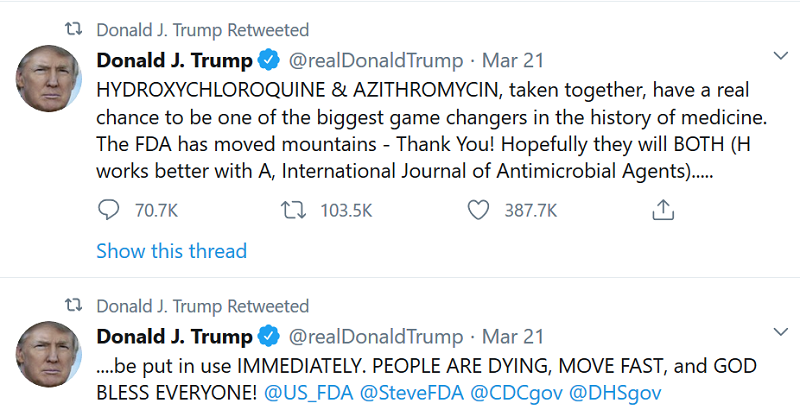 Instant TDS enragement ensued – despite this being known for years:  Virology Journal, Spring 2005 Chloroquine is a potent inhibitor of SARS coronavirus infection and spread. Yes, 2005, 15 years ago.

The condemnation was ubiquitous:  Dangerous (New Yorker), A Lie (Vanity Fair), Risky (Politico), and the Enemedia’s favorite sneer, “Unproven,” by CNN, MSNBC’s Rachel Madcow, and too many others to count.

This of course made the Lying Swine go apoplectic on steroids.  Really funny to see swineherds like ABC’s White House correspondent Jonathan Karl say Rubio’s tweet was “outrageous and hurtful,” and demanded an apology.  I’m sure Marco will – right after you, Jonathan apologize for all the outrageous and hurtful lies, smears, and insults you and your colleagues constantly launch upon our president and our country.

But the beautiful irony in all this is the carton-full of eggs smeared all over Enemedia faces now that the FDA on Sunday (3/29) issued emergency approval for HCQ in treating China virus patients.  30 million 200mg doses donated by Sandoz will be distributed to hospitals throughout the country.

That’s just the start – in the US and globally.  Sanofi is providing millions of HCQ doses to 300,000 China virus patients in France.  Novartis is producing 130 million for global distribution.

Will it work?  We’ll know soon, with countless China-virus patients being treated with HCQ or HCQ/AZ in America and countries all over the world.

One fascinating indication may be this report of a family doctor in Monroe, NY, Vladimir Zelenko, MD, whose clinic has successfully treated over 500 patients with China virus symptoms over the last 10 days (since POTUS’ tweet) using HCQ/AZ with zinc sulfate added.  It’s really a must-read from today (3/31): Doctor Treating China Virus Patients with Trump’s ‘Gift of God’ Drugs.

The odds are looking good.  Not a sure bet, but a good one.  And if it pays off, if the China virus pandemic comes to an end soon with millions of lives saved as a consequence – it will be due to one single man making one single tweet, then following through on it.

That man will then be The Hero of the Age.  The Enemedia will double down on their hate and denial, make every possible effort to tear him down rather than applaud.  But just as Americans and the world ignored them, going all out for a cure they denigrated, so it will be in November.

If Donald Trump’s bet pays off, he will be unbeatable, the Dems will know it and will just go through the motions, phoning it in.  Pelosi and Schumer, Schiff and Nadler, the whole scumbag lot and every member of the Enemedia with them, will be tossed into the dustbin of history.

Thanks to one tweet by one man on March 21.  Sure hope this stuff works.