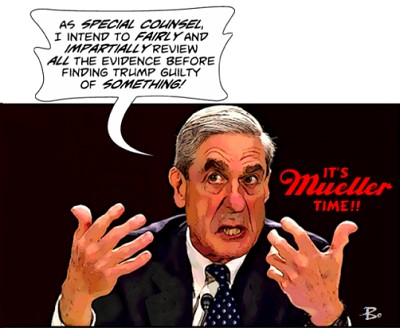 It would probably give Robert Mueller a nervous breakdown, not to mention James Comey, Andrew McCabe and the rest of the FBI cabal, past and present, but at this point the special counsel seems to be actually causing the reelection of Donald Trump.

Most of the country, other than the greed heads in the media and extreme Democrat Party operatives, no longer gives a hoot in Hades about the “Russia Probe.”  They’re frustrated and sick of it.

There’s a dawning national consensus of “enough already” reflected by Judge Ellis when he demanded to know exactly what Paul Manafort’s possible money laundering schemes of years ago had to do with Trump colluding with Russia in the 2016 election. The same might be said of Stormy Daniels, whose Russia connection is even more remote.

But let’s skip past the subplots of the moment to the greatest of all unintended consequences of this endless investigation — the decline and fall of the Democrat Party.

Yes, you read that correctly.  Like a crackhead addicted to the next puff, Democrats and their media allies have spent most of the last sixteen months fixated on whether Trump somehow, some way, colluded with Putin.

Meanwhile, a zillion issues slipped by, some important, others less so, but the Democrats barely weighed in on anything, other than to whine about Trump.

What a dumb mistake.

And it was compounded by the assumption that the public agreed with them, which was true for a while, to some extent, but has now worn surpassingly thin.  It didn’t help that the tedious late-night talk show hosts and SNL comics fixated on Trump as well, creating a perfect (but utterly useless) storm.

Mueller and the FBI were the ringmasters in all this along with their media friends whom we might dub the Leak Squad (not to be confused with the Geek Squad at your local Best Buy).

This “righteous circle,” if we can call it that, continually convinced themselves of the goodness of their calling, when in reality it wasn’t a calling at all, but a complete of waste of time and a distraction from discovering what exactly their party stood for.

Finally, the Democrats are waking up, but I strongly suspect it is too late.  They are clearly out of practice at making policy or coming up with ideas.  That was evident from an article in The Hill over the weekend — “Dems face pressure to focus on economy, not Trump.”

Senate Democrat Leader Charles Schumer and House Democrat Leader Nancy Pelosi have unveiled a variety of “ambitious” proposals, such as raising the minimum wage to $15 an hour and creating a national system of paid family and sick leave.

Ambitious proposals?  They sound more like shopworn boilerplate from a Democrat Party platform circa 1992.

Maybe they are better off banging their shoes about Trump.  After all, the way the economy’s going, $15 an hour may be in the rear-view mirror all by itself before November and the hoary “paid family leave” proposal made irrelevant in an increasingly competitive job market.

So Mueller may be, in the end, the Democrats’ best bet. But he is also their bête noir.  He is the man of supposed great moral rectitude who promised to rid them of the obvious injustice of the last election.

Unfortunately, Mueller turned out to be an extreme moral narcissist who, consciously or not, led the Democrat Party down a primrose path of impeachment that could never happen and would inflate (slowly, but still…) Trump’s poll numbers while assuring him a second term and giving plenty of cannon fodder to Republican congressional candidates once embarrassed by the president.

Everything is ironic.  Nothing, as Lawrence reminded us, is written.