2 The Point News » Kelly's Panorama » Members Only » IS MIKE FLYNN THE DOOM OF ROBERT MUELLER?

IS MIKE FLYNN THE DOOM OF ROBERT MUELLER? 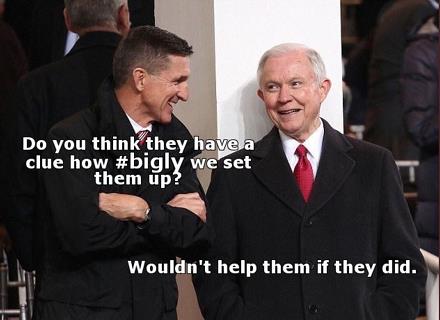 Lt. Gen. Michael Flynn is scheduled to be sentenced next Tuesday (12/18). He pled guilty Dec. 1, 2017 (the day after being formally charged) to one count of lying to the FBI about his telephone conversations with Russian Ambassador Sergei Kislyak.

Flynn’s sentencing has been postponed three times. It may well be yet again.  You can see why with this Fox News headline of early this morning (12/13):  Judge in Flynn case orders Mueller to turn over interview docs after bombshell claim of FBI pressure.

U.S. District Judge Emmet G. Sullivan ordered Mueller to turn over the FBI documents by 3pm tomorrow (12/14).  Fox noted Judge Sullivan is putting “Mueller under the microscope,” which is another way of saying it’s Mueller who could be in beaucoup deep kimchee, not Flynn.

There are indications in his sentencing memo that Mueller already knows this.

Flynn should get leniency because he provided “substantial assistance” in a criminal investigation (redacted), Mueller said.

Look at the redaction on Page 2 on the addendum to the sentencing memo. “The Clinton Foundation” would fit neatly in the redaction in the title.

Flynn assisted with the Special Counsel’s investigation “on a range of issues, including interactions between individuals in the Presidential transition team and Russia (redacted.)”

Flynn’s “early cooperation was particularly valuable because he was one of the few people with long term and first hand insight regarding events and issues under investigation by the SCO,” Mueller said.

Flynn served just 24 days in the Trump administration. His long term and first hand insight evidently pertains to something else the SCO was investigating.

Flynn met 19 times for nearly 63 hours with the SCO and “other components of the Government,” produced thousands of documents to DOJ, his lawyers said.

Flynn’s description of the FBI interview on Jan. 24, 2017 makes it appear FBI Deputy Director Andrew McCabe set him up. Agents Peter Strzok and Joe Pientka came to the White House under false pretenses, never warned Flynn of the penalties for lying to the FBI.

The Wall Street Journal opines about “The Flynn Entrapment” here.

He did a bad thing, and he’s sorry for it, Flynn said. But did he? Let’s review the circumstances:

On December 29, 2016, President Obama imposed sanctions on Russia for meddling in the 2016 election.

Over the next week, Flynn, the National Security Adviser-designate, held several telephone conversations with Kislyak, to urge Russia not to overreact.

We learned about the Flynn-Kislyak conversations – but not about what was said in them — in this David Ignatius column in the Washington Post January 12, 2017.

Ignatius learned of the calls from “a senior (Obama) government official.” Who was leaking classified information, a felony? The leaker has yet to be identified publicly.

In his column, Ignatius wondered if Flynn may have violated the “spirit” of the Logan Act, a 1799 law that prohibits private citizens from engaging in diplomacy with foreign governments.

The law is named after George Logan, a prominent Jeffersonian who traveled to Paris to negotiate an end to the undeclared war with France. That mightily peeved President John Adams and the Federalist Party.

In the 219 years since, there have been just two indictments under the Logan Act (the last in 1852), no convictions. This is because most lawyers think it is unconstitutional and unenforceable.

The Logan Act would not have applied to Flynn in any event, because he was acting as the National Security Adviser-designate on the Transition Team for a president-elect who would become president in less than three weeks.

Every telephone call with the Russian ambassador is recorded. FBI agents listened to the Flynn/Kislyak conversations, found nothing illicit, the Washington Post reported Jan. 23rd, 2017, the day before Flynn was interviewed.

As a master spook, Flynn had to know his calls with Kislyak were recorded, that the FBI would listen to them. So why would he lie about what he’d said?

Since FBI agents listened to the tapes, or read transcripts of them, they already knew what Flynn and Kislyak said to each other. So why (other than to entrap him) were Strzok and Pientka sent to the White House to ask Flynn (sneakily and maliciously) about what he’d said to Kislyak?

Do you think Flynn got suckered by McCabe’s perjury trap? Thomas Wictor doesn’t. Neither do I. We think Flynn offered himself as bait in a sting for the ages.  Read Wictor’s reasoning to see why.

On Jan. 26, 2017, Acting Attorney General Sally Yates told White House Counsel Don McGahn Flynn lied to Vice President Pence and others about what he said to Kislyak, may have violated the Logan Act. McGahn conducted his own review, determined Flynn broke no law.

There’s another reason why I think Flynn’s sentencing may be postponed yet again. Because Mueller has a Strzok problem.

“The agent whose testimony is central to the perjury case against Flynn got himself fired from the FBI for showing blatant political bias in the performance of his duties,” notes Brian Cates.

It’s also not helpful to Mueller that McCabe, too, got fired for misconduct.

The formal charge against Flynn is that he told Agents Strzok and Pientka he hadn’t discussed sanctions relief with Kislyak, when he had.

But both FBI Director James Comey and McCabe told Congress that Strzok and Pientka told them Flynn hadn’t lied.

The charge on which the Flynn indictment is based is from a 302 (report of interview) filed seven months after the fact.

Does that seem fishy to you? It does to Judge Sullivan. That’s why he’s ordered that the original memoranda from Strzok and Pientka on the interview with Flynn, and the official FBI 302 filed seven months later be filed with the court by tomorrow.

Judge Sullivan has no tolerance for prosecutorial misconduct. So God help Mueller’s testicles if the 302s don’t match.  Margot Cleveland at The Federalist explains why this morning (12/13).

The Flynn case originally was assigned to Judge Rudolph Contreras, an Obama appointee and buddy of Strzok and paramour Lisa Page. But days after accepting Flynn’s plea, Contreras was yanked from the case (without explanation) and replaced with badass Sullivan.

Odds are Judge Sullivan will toss the case. Whereupon the Special Counsel investigation will be kaput. The Flynn indictment is central to the Russia collusion narrative. Without it, all Mueller has is a dozen Russians (who will never stand trial) who spent $4,700 on Facebook ads.

Presumably Mueller would like to avoid the humiliation of having his huevos snipped off by Judge Sullivan, which is why I think sentencing may be put off yet again.

The Horowitz report doubtless will describe FBI misconduct in excruciating detail, but if it comes out before sentencing, Mueller could dump the indictment/plea deal himself, fold his tent and slink away with something approaching dignity.

In what probably is unrelated, but may not be, I was saddened to learn that Gen. John Kelly, a great American hero, will be leaving the White House at the end of the year.

Gen. Kelly was the ideal man to establish order, to ferret out leakers. But he hasn’t a political bone in his body. With Trump’s re-election campaign fast approaching, he could use a chief of staff with political smarts, who knows where all the bones are buried.

Trump currently is playing rope a dope with the Lying Swine about a successor. Journos float a name. It is shot down.

Flynn’s exoneration will crush moonbat hopes. What better way to add to our joy than to have him named White House CoS?