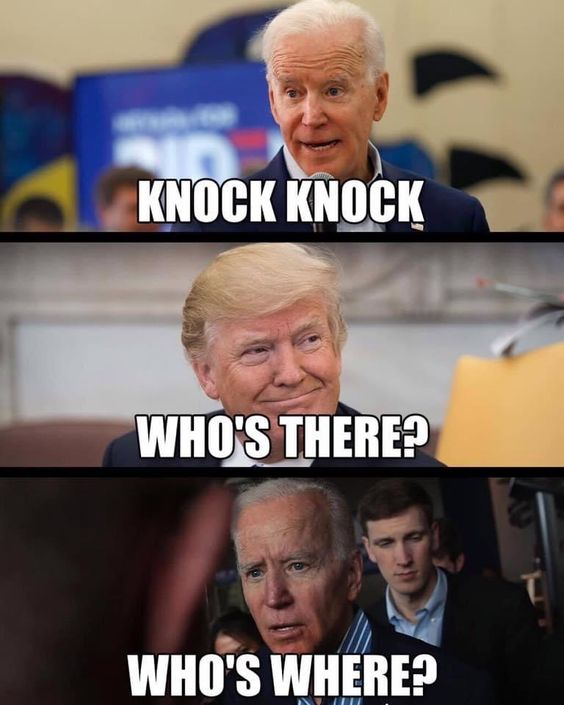 Joe Biden and the Democrat Party may have seriously hobbled their election prospects in November by refusing to send out staff and volunteers to campaign door-to-door, building the essential “ground game” that helps win elections.

Meanwhile, President Donald Trump’s campaign and the Republican National Committee (RNC) claim to have volunteers and staff knocking on 1 million doors a week across America.

The Biden campaign and the Democrat National Committee (DNC) claim that they are not committing political suicide but merely adapting to the coronavirus pandemic (what’s the difference?). They told Politico that they can compensate for the lack of in-person canvassing with phone calls, texts, digital organizing, and virtual meet-ups with voters. Right.

“At first I was nervous, but our response rates on phone calls and texts are much higher and people are not necessarily wanting someone to go up to their door right now,” Jenn Ridder, Biden’s national states director, told Politico. “You get to throw a lot of the rule book out the window and try out new things.”

The Trump campaign appears to have taken the exact opposite approach. Trump Victory has required staffers to read “the book” on ground game, specifically Groundbreakers: How Obama’s 2.2 Million Volunteers Transformed Campaigning in America — a deep dive on the Obama campaign’s 2008 and 2012 door-to-door efforts.

Trump Victory doesn’t just have staffers reading up, however. The campaign has more than 1,500 full-time staffers and 1.8 million volunteers across 23 states.  The RNC told Politico it will add an additional 1,000 people by the end of September to focus on door-to-door canvassing and to get out the vote.

The campaign and the RNC started deploying mask-wearing field staffers and volunteers in June and claim to be hitting 1 million doors every week. The campaign claims to have conducted more than 70 million volunteer voter contacts.

“From now to Election Day, voters may only see one campaign at their doors,” Elliott Echols, the RNC’s national field director, told Politico:

“If this were Barack Obama running, Democrats would want to be out there knocking doors. They don’t have enthusiasm or a strong field operation, so it is a convenient excuse. We can do this safely for President Trump and Republicans up and down the ballot.”

While the RNC is maintaining a strong ground game during the pandemic, that doesn’t mean Republicans are turning a blind eye to the threat of the virus. The RNC said every staff member receives an eight-page document of health protocols, including CDC guidance.

The committee provides canvassers with masks and encourages them to take a few steps back after knocking on doors. The RNC has spent over $100,000 on personal protective equipment and office cleaning.

Biden’s campaign proved slow to ramp up its operations after the former vice president edged out his Democrat rivals. The campaign waited until July to announce senior leadership for critical swing states like Florida and Pennsylvania. Nevertheless, the Biden campaign told Politico it will have over 2,000 battleground staffers by the end of August.

Yet it remains unclear if or when Biden’s campaign and the DNC will decide to launch a ground game operation to counter Trump’s door-to-door canvassing. November 2020 could become a massive and historic experiment in just how important a ground game truly is.

While it is possible that virtual “contacts” will prove nearly as effective as a traditional ground game operation, this decision still seems reckless in the extreme. Biden’s campaign may be effectively committing political suicide.

If the lack of a ground game hurts Biden, it will also hurt Democrats in down-ballot races. This key disadvantage may dash leftists’ hopes for holding the U.S. House of Representatives and taking the U.S. Senate.

Politico revealed the rationale behind this potential political suicide. The move appears to be “part of a larger gamble that voters will give Biden credit for taking the coronavirus more seriously than Trump.”

Yet the cautious approach comes with serious downsides. Trump has repeatedly mocked Biden for campaigning from his basement, and Biden just announced that he would not even travel to Milwaukee to accept the Democrat presidential nomination in person, for fear of the coronavirus.

Biden may have an edge in Democrat-rigged polls, but this ground game gap may sink him.

Tyler O’Neil is the author of Making Hate Pay: The Corruption of the Southern Poverty Law Center.