2 The Point News » Guest Authors » Members Only » IS GERMANY HEADED FOR RECESSION?

IS GERMANY HEADED FOR RECESSION? 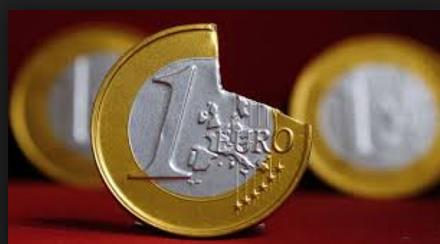 The economic outlook in Germany is deteriorating with alarming speed and any mistake by policy-makers could push the country into a full-blown slump, a leading economic institute has warned.

“The danger of recession has increased markedly. It is a notably more critical picture than a month ago,” says the Macroeconomic Policy Institute (IMK) in Düsseldorf.

The IMK’s early warning indicator says the recession risk over the next three months has jumped suddenly to 32.4% as trade tensions mount and liquidity ebbs away in the international financial system.

This is higher than in March 2008 when the pre-Lehman storm clouds were gathering and the country was already sliding into a slump, unbeknownst to Berlin at the time. It may be a false alarm but it clearly indicates that global growth is weaker than widely assumed just weeks ago.

“What we have seen lately is a typical late-cycle constellation, with uncertainty from the financial markets having a self-reinforcing spillover into the real economy. It is not yet clear whether such a downward spiral has already begun. Everything must be done to avoid intensifying the uncertainty,” it says.

Germany is heavily reliant on world trade and is therefore a bellwether for the broader health of the global economy. Its industrial sector lurched abruptly from boom to bust early in the last downturn and proved to be a leading indicator for the Great Recession.

JP Morgan’s instant “Nowcast” tracker of eurozone growth in the first quarter has dropped to 1.5%, half the torrid pace of late 2017.

Germany is the chief supplier of machine tools and engineering equipment to China. 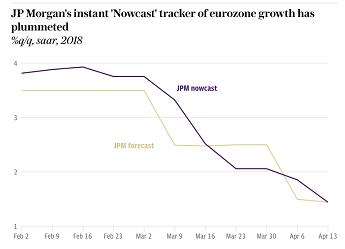 The weakening data dovetails with signs that the Chinese economy has come off the boil since the Communist Party conclave last November. The delayed effect of credit curbs are biting. Beijing is trying to get a grip on its fiscal deficit, now 12% of GDP (IMF definition).

Proxy measures put together by Capital Economics suggest that the true rate of economic growth in China has dropped to near 4.5%, a “growth recession” in Chinese terms and a far cry from the “smoothed” official figure of 6.6%.

The IMK says a confluence of US-China trade jitters, a decline in German industrial output, and a 7% fall in the DAX index of equities since mid-January – led by bank stocks – were all feeding off each other.

The recession indicator was briefly higher during the Chinese currency crisis in early 2016. That storm passed for two key reasons: the

US Federal Reserve backed away from monetary tightening, which eased pressure on the yuan and rescued China; and oil prices were then crashing due to a surge in supply, generating a $2 trillion windfall stimulus for global consumers.

The picture is very different today. The Fed is on the warpath. Joint production cuts by Opec and Russia have cleared the global oil glut.

Brent crude prices have climbed back to $72 a barrel and may spike further if Donald Trump re-imposes sanctions on Iran in early May. 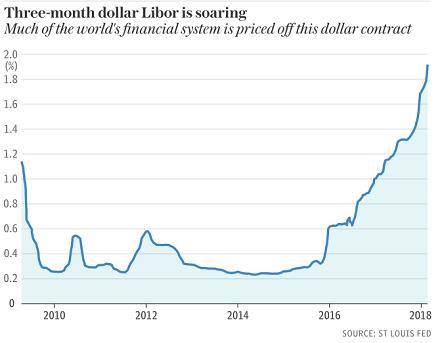 Simon Ward from Janus Henderson says the global economic slowdown was baked into the pie months ago when the money supply began to falter. His key indicator – six-month real M1 money – touched a nine-year low of 1% in February.

Early data suggest a slight pick-up in March. This signal tends to lead the economy by around six months, suggesting that the global economy may remain trapped in the doldrums through the second and third quarters.

The monetary figures for the eurozone buckled last year. What is most striking is that the growth rate of real M1 deposits in France has dropped to 2.4% from 7.3% in September, and in Spain to 2.7% from 6%. Such falls do not in themselves imply a recession but they warrant caution.

It is clear that the eurozone boom in 2017 has fizzled out. There has been a blizzard of disappointing figures on industrial output, retail sales, and business confidence over recent weeks.

The European Central Bank faces a treacherous task as it prepares to phase out QE altogether this year. It has already cut bond purchases from €80bn (£69bn) to €30bn a month.

Nobody knows for sure how much damage is being caused by this reduction in the “flow” of stimulus, since few can agree intellectually on how QE actually works. The risk is that the ECB could tighten too hard and cause the current soft patch to metastasize into a full-blown downturn.

Monetarists argue that the US liquidity squeeze is already having powerful effects. The Fed has penciled in four rate rises this year. It is currently shrinking its balance sheet by $30bn a month. The pace of quantitative tightening (QT) will rise to $50bn a month in the fourth quarter.

This is will slow the growth of the broad M3 money supply almost mechanically.

The International Monetary Fund is expected to paint a rosy picture of accelerating global growth in its world economic outlook (WEO) this week, with the caveat from Christine Lagarde that the international trading system is “in danger of being torn apart”.

Yet the Fund has a mixed record of catching key turning points. Its forecast in January 2008 – a few months before the Great Recession – was for global growth of 4.2% that year and 4.4% in 2009. It seemed to have no inkling of trouble in the eurozone, yet we now know that Germany and Italy tumbled into recession in the second quarter of that year, long before the Lehman crisis itself.

The hedge fund CrossBorderCapital says its global liquidity index has dropped to a six-year low of 25.3, nearing levels last seen during the onset of the European banking crisis in 2011.

“The odds of a serious market correction remain high. Our models have been warning of sharply deteriorating risks from the second quarter of 2018. The latest tariff tensions are not the main issue, because we live in a world dominated by capital flows not trade flows. The next bear market may be underway,” it says.

The picture is fluid. Opinions differ widely, with most analysts still predicting healthy global growth this year. Some expect a blow-off boom as the stimulus from Donald Trump’s tax cuts feed through into fresh spending.

Authorities and central banks can switch tack at any time and change the outcome. What is clear is that the voices of dissent are growing louder and more numerous.