HOW TRUMP CAN FORCE A DO-NOTHING CONGRESS TO DO SOMETHING 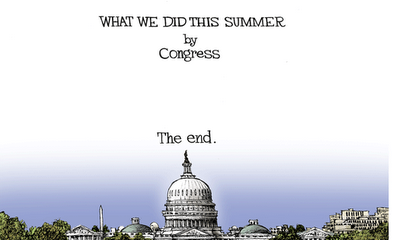 “The Senate is conducting the slowest confirmation process in American history.  For the past six months, Senator Schumer has deliberately run an unprecedented campaign of obstruction against the President’s nominees for high-ranking positions in the government.”

This is absolutely true.  Yet there are two fundamental problems with what he said.

First, he said “The Senate” is doing this, not just the Dems – and since the Pubs control the Senate, he’s implying that McConnell is responsible for the slowdown by allowing it.  Yet Marc places the onus wholly on the Dems, leaving the Pubs entirely off the hook:

Second, all Marc did was to complain – he offered no solutions whatever to a very real and serious problem except to ask Schumer to “stop” – with no threat of specific consequences if he didn’t.  Schumer’s response will be a smirk and a shrug.

This is no way to run a country.  We all know the source of the problem in Congress – the UniParty of Dems and Rinos that wants to maintain the status quo, keep the Deep State, and do nothing that might jeopardize lobbyists’ donations to them.

Trump is a threat to all this, which is why the UniParty is in collusion against him.

What’s obviously needed is for the White House to replace whiny complaints with specific measures the President will take to force a do-nothing Congress into confirming his nominees and enacting his agenda.

Thus, the next time Marc Short appears before the White House Press Corps, he could announce that President Trump will be taking the following measures effective immediately:

*Article II Section 3 of the Constitution states: the President “may, on extraordinary occasions, convene both Houses, or either of them,” i.e., the House and/or the Senate.

President Trump will therefore use his Constitutional authority to cancel Congress’ August vacation and keep Congress in session so that his nominees may be confirmed by the Senate, that Obamacare be repealed, and his tax reform legislation may be passed.

The President will thus support the call by Republican National Committee Chairwoman Ronna Romney McDaniel for the August Recess to be canceled (7/10).

It is to be noted that the last President to exercise this authority was Harry Truman in 1948, with his “Turnip Day Session” forcing what he called the “Do Nothing Congress” to cancel their summer vacation.

*The President will make every legal effort to persuade Senate Majority Leader Mitch McConnell to terminate the legislative filibuster.

One place to begin is for Senator McConnell to end the “virtual filibuster” – by which all that’s needed to block a bill is for a single Senator to merely announce his intention to filibuster it while never having to physically do so.  If Democrats want to filibuster a bill, they must now do it for real, sleep on cots and keep speaking 24/7.

The Majority Leader can simply issue his decision that there will be no more “virtual” or “silent” filibusters from now on, but that they must be physically real.

Such a decision would end the “two-track” system introduced in 1970 exploding filibusters as they could stop a bill while the Senate could go on to other bills.  Requiring filibusterers to talk non-stop on the floor means no other business can be conducted nor any other bill considered while they do so.  Once they stop talking, debate is over and a vote taken.

The Majority Leader can also by his decision enforce Rule XIX that no Senator can speak twice on a bill on the same legislative day without his permission.  A Senate “legislative day” lasts between adjournments and thus can last weeks or even months.

“Blue Slips” originated 100 years ago (1917) as a courtesy that a judicial nominee would need the approval of his home-state Senators belonging to the President’s party.

The courtesy has since been extended to Senators of either party, thus the Dems are using their blue slips to block confirmation of President Trump’s judicial nominees.

Blue slips are not even a Senate Rule, nothing more than a courtesy that the Chairman of the Judiciary may withdraw at any time as it is being abused.  Democrats are being abjectly discourteous regarding their abuse of blue slips.

*The President will publicly encourage in every way Majority Leader McConnell to reinstate the Harry Reid 2-hour/8-hour debate rule for presidential nominees.

As recently explained in American Spectator (6/25), in 2013, then-Majority Leader Harry Reid issued a standing rule limiting to only two hours of debate on any Obama judicial nominee, and to only eight hours of debate for any executive branch nominee below Cabinet level.

This allowed President Obama’s expedited processing of dozens of judicial and subcabinet nominations each week. Each week.

Reid’s rule has since expired, with Majority Leader McConnell now allowing Minority Leader Schumer to have cloture filings that burn two days and then another thirty hours on the floor of the Senate on each presidential nomination.

This applies even to nominations that might have unanimous or near unanimous support. This is not just paralysis of the executive branch but sabotage of the judiciary.

All that is necessary to stop Senator Schumer’s obstructionism for the sake of sabotaging the Trump Presidency in this regard is for Majority Leader McConnell to reinstate the Reid rule on limiting debate on nominees.

These are some examples of how President Trump can be more pro-active in dealing with Congressional stymieing of his agenda.  The above examples deal with the Senate – other than cancellation of summer vacation for the House as well.

The President has a lot of arrows in his quiver.  We’ll be discussing more of them as time goes on, including those for Ryan’s House.  The above, however, are ones he can fire at Mitch McConnell right now.   You can let the White House know how you feel here.

The Democrats had Harry Truman.  We have Donald Trump.  Truman supporters would call out to Truman in a speech denouncing Republicans, “Give ‘em Hell, Harry!” – to which Truman would respond, “I don’t give them Hell.  I give them the truth and they think it’s Hell.”

We need to call out “Give ‘em Hell, Donald!  Sure enough, when Trump gives the collusive Dems and Rinos of the Do-Nothing Congress the hard cold truth, they’ll think it’s Hell.  And Trump will win.