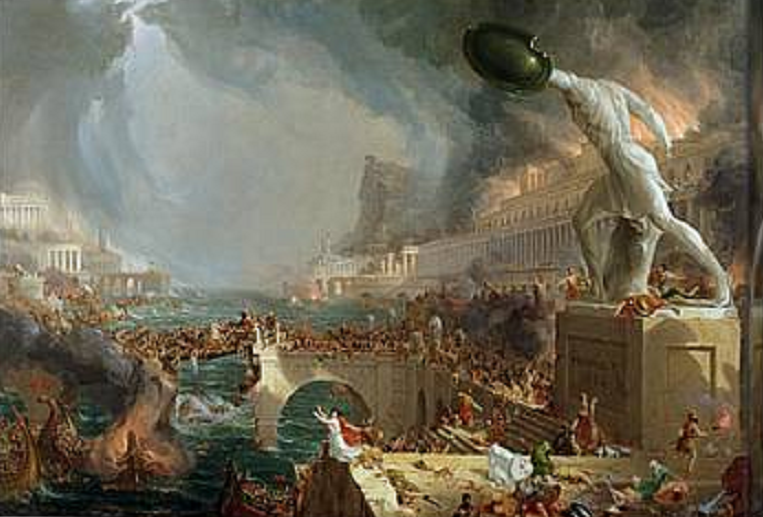 To understand the extraordinary events in America today, it is helpful to look at the ancient wisdom of Greece and Rome. As the wise historian Thucydides said, “If we forget the errors of the past, we are doomed to repeat them.”

The classical Greek authors Socrates, Plato, and Aristotle, as well as the Romans Cicero and St. Augustine, explain much of what we are experiencing in politics today. A certain textbook, The History of Political Theory: Ancient Greece to Modern America, may also be helpful in this endeavor (yes, I’m the author).

The ancient Greco-Roman historian Polybius (200-118 B.C.) developed a theory of the “lifecycle” of a republic. Like a human being, a republic is born, is young, matures, grows old, and dies.

The United States was born in 1776 (our Declaration of Independence) and 1789 (the ratification of our Constitution); was a youth in the late 18th and early 19th centuries; you might say was adolescent in the mid-1800’s (during our Civil War) and matured in the industrial age of late 19th and early 20th centuries.

But, by the mid-20th century, especially after World War II, our country grew old, and beginning in the 1960s, frail, sickly, and mentally-impaired.

Like human beings, elderly republics become weak and sickly, sad and demented before they die completely: into anarchy and lawlessness, or tyranny and dictatorship. A society shows its old age in moral weakness, political corruption, decadence, and depravity.

Ironically, the virtues of an early republic—hard work, honesty, courage, frugality, morality—lead to the great wealth and power which then contribute to its decline.

Like a gifted actor or athlete, whose celebrity and sudden fame and wealth goes to his head and destroys him with drugs, depravity, and madness, a rich, worldly Republic can become a powerful, decadent empire.

Much of the revolutionary rhetoric in 18th century American pamphlets and sermons identified the British Empire as rich and corrupt, evil and decadent. Bribery, lying, and hypocrisy became common. If the colonies had not separated from imperial England, we could not have preserved liberty, democracy, and Christianity.

The solution for a dying republic is the same as for an aging individual: return to the vigor, strength, values, and goodness of a healthy youth.

All the classical philosophers prescribe returning to the principles of the American Founding: civic virtue, a strong work ethic, honesty, family loyalty, patriotism, military honor, law and order, personal morality, and religion. The revival of these early republican values provides the anti-aging remedy to restore the health, vigor, and goodness of an earlier society.

As the aging corpse of the American body politic restores the qualities of its youthful innocence (and we may hope, now with a more mature judgement) it may avoid the painful and disgraceful collapse and ruin of the Athenian, Roman, and European empires.

Having gone through the painful loss of close, loving families, honest, hard-working businesses, clean and dedicated government service, and safe and happy communities to arrive at the sad and disgusting consequences of filthy, violent cities—crime, mental illness, corruption and hypocrisy in government, decline of decency and happiness,—a restored republic, like a repentant sinner, is wiser about the temptations of power and wealth, and stronger in keeping them within a moral and healthy setting.

A wise and chastened mature person or society, knowledgeable of consequences of evil, is much safer than an innocent youth (or young republic) who is easily corrupted. A wise Jerusalem is better than an innocent Eden.  Which choice will America make on November 3rd?

Garrett Ward Sheldon is professor emeritus of American political thought, law, and religion at the University of Virginia.