2 The Point News » Guest Authors » Members Only » HOW LONG CAN PUTIN BE RUSSIA’S PRESIDENT-FOR-LIFE?

HOW LONG CAN PUTIN BE RUSSIA’S PRESIDENT-FOR-LIFE? 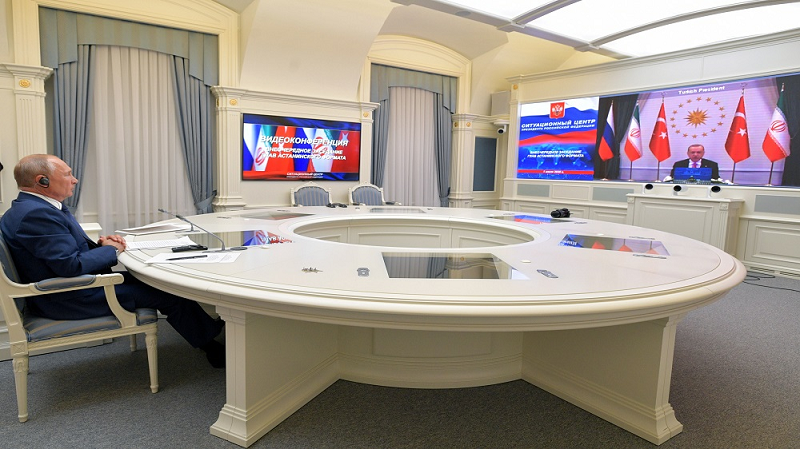 For months, and particularly during the end of June and start of July, Russian politics was centered on ensuring the desired result in the vote on the set of amendments to the constitution to keep him in perpetual power.

By resorting to crude manipulations and fraud, President Vladimir Putin secured his “triumph” and can now claim yet another (his fifth) presidential term in the elections scheduled for 2024. His rule, however, much like the blatantly falsified vote, is shaped by gross distortions of facts and figures (Novaya Gazeta, July 2).

The official data on the spread of the COVID-19 pandemic entirely fails to reflect the real scope of the disaster (Meduza.io, July 1). Economic indicators are also carefully doctored: even as real incomes and household consumption keep contracting, government forecasts continue to predict a fast recovery (Rosbalt, June 30).

Putin cannot order the recession to stop, so he has turned to the area where he used to thrive—foreign policy.  Used to – but not any more.

The most immediate problem is growing in neighboring Belarus, where President Alyaksandr Lukashenka faces unexpectedly determined opposition in the forthcoming presidential elections and has opted to put his contenders behind bars (Nezavisimaya Gazeta, July 1).

Seeking to show his continued good rapport with Russia, Lukashenka attended the parade in Moscow on June 24 and then stood next to Putin at a ceremony for opening a huge monument at the site of the tragic 1942 Battle of Rzhev (Kommersant, June 30).

Putin may have mixed feelings about the maverick Belarusian head of state, but much the same way as in domestic politics, the Kremlin leader’s preference vis-à-vis Minsk is for “cementing” autocratic control rather than experimenting with unpredictable changes.

The Middle East also provides a rich menu of urgent problems, and Putin has reconnected with the Syrian calamity in a recent video conference with Iranian President Hasan Rouhani and Turkish President Recep Tayyip Erdoğan (Izvestia, July 1). The hostilities around Idlib province remain frozen, and Moscow is not particularly eager to invest in Syria’s reconstruction as Iran is forced to reduce its dominant role because of the severe consequences of the COVID-19 health crisis (Kommersant, July 1).

A more dynamic intrigue is unfolding in Libya, where Turkish-backed forces of the Government of National Accord have pushed the freedom fighters of Khalifa Haftar away from Tripoli but stopped before the key port of Sirte (Svobodnaya Pressa, July 3).

Egypt’s President Al-Sisi supports Haftar, and is threatening to launch a direct intervention if Sirte is captured.  Russia has to decide whether to join the fray with the few combat planes it has allegedly moved to the Al-Jufra airbase in central Libya (Nezavisimoe Voennoe Obozrenie, June 25).

The Libyan conundrum was the main theme of the lengthy video conversation between Putin and French President Emmanuel Macron last week. Common ground remains slippery, however, and shared criticism of the Turkish intervention has not translated into a readiness to jointly confront it (Rossiiskaya Gazeta, June 26).

Regarding Ukraine, Macron still hopes that nice talk may persuade Putin to show flexibility in resolving the Donbas conflict. But “cementing” this violent deadlock in eastern Ukraine appears to be the Kremlin’s preference, underpinned by expectations that the deepening crisis would trigger a political meltdown in Kyiv (Nezavisimaya Gazeta, July 1).

One instrument Putin is missing in his European policy is the export of natural gas, which has fallen by some 20 percent. Meanwhile, the Nord Stream Two gas pipeline project remains in partial limbo because of the United States’ sanctions (Forbes.ru, July 1).

Irritating as these sanctions are, the Kremlin refrains from orchestrating a massive anti-American campaign, still hoping that President Donald Trump might, in the crucial months until the November elections, opt for a breakthrough in arms control (Russiancouncil.ru, June 20).

Typically, Moscow could attract some attention in Washington by engaging with Beijing, but there has been a notable pause in the high-level exchanges between Putin and President Xi Jinping since their last phone conversation in early May.

Conspicuously, Xi never called to congratulate Putin on the latter’s success in manipulating the vote on the constitution.

Russia has abstained from any mediation attempts in the Sino-Indian clash in the Himalayan borderlands, but the tone of the mainstream Russian commentary is more sympathetic to New Delhi; and Prime Minister Narendra Modi found it opportune to call Putin with congratulations (Nezavisimaya Gazeta, July 3).

Russian pundits are venturing opinions about how the country can stay out of the inescapable confrontation between China and the US or even how it might counterbalance the growing dependence on its pivotal “strategic partner” by expanding ties with other Indo-Pacific countries.

All these musings are duly registered in prestige-conscious Beijing (Russia in Global Affairs, June 18).

The completion of Putin’s personal political project ensuring the indefinite prolongation of his rule has left Russian society even more divided and discontent than would otherwise be the case.

His leadership has been compromised, and delivering “more of the same” amidst the unfolding crisis offers drastically diminishing returns for the regime.

Putin needs foreign policy successes to rehabilitate his damaged profile; but so far, the results in the traditional directions have been distinctly unspectacular. Avoiding serious blunders is a perfectly reasonable guideline, but it cannot satisfy the Kremlin’s desire to score a prestige-boosting victory.

Yet, when it comes to the most demanding set of issues facing the globe—from control over the coronavirus to climate change, from inequality to trade—Russia has little or nothing to say.

Conflict manipulation remains its forte, but Moscow cannot afford costly power-projection and has no stomach for absorbing setbacks. Putin’s posturing is fraught with risk of an unaffordable fiasco. Yet, he has no other option.