HOW A POLICE STATE FASCIST AMERICA IS BORN 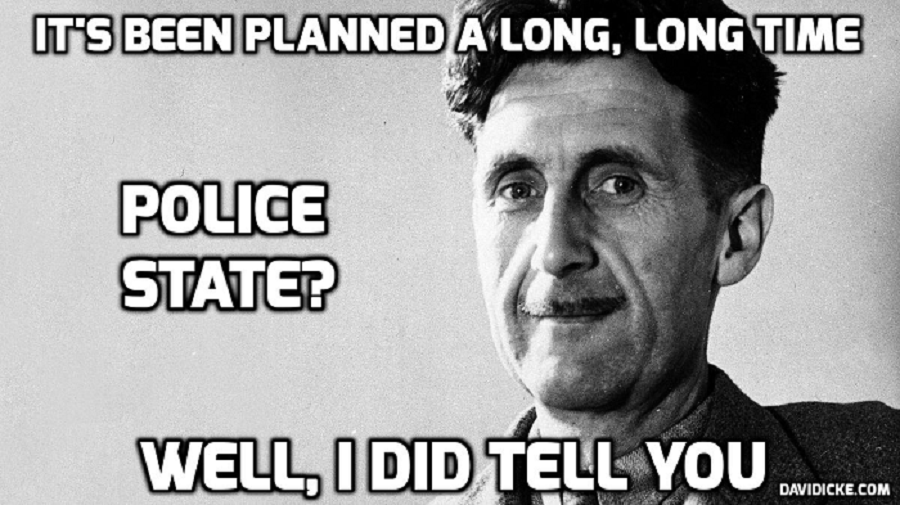 The United States and much of the western world, by utilizing the most draconian of tactics, is plunging many nations into potential economic and societal chaos as they attempt to stem the tide of the Chinese Coronavirus.

Relying on dubious and error-prone projections, politicians and bureaucrats constitutionally or statutorily limited in their power, are now exercising near-dictatorial authority in their edicts, which are effectively suspending or terminating numerous freedoms under the guise of protecting their respective nations.

All Americans — not just those with first-hand experience dealing with World War II and its aftermath or living in Eastern Europe under iron boot of the Soviet Union or escaping the Communist/socialist hellholes of Cuba, Southeast Asia or Venezuela — should view these actions with considerable trepidation.

When societies lose their freedom, it is not ordinarily because autocrats or tyrants have forcibly taken it away.  It is usually the result of the population willingly surrendering their freedom in return for protection against an external threat.  While the threat is oftentimes real, it is invariably exaggerated.

This is what we in the United States are experiencing.

The general public has been stampeded by the fearmongering in the media into demanding action from the politicians at both the state and federal level.  The politicians respond and do not pause to ask whether these actions will work — just do something!

They do not ask if the financial and societal cost to the nation is worth the unknown and perhaps nebulous return.

Any student of history and human nature would recognize that these are the classic symptoms of collective hysteria.

Hysteria is contagious.  This nation is turning itself inside out as we, thanks to the media, are exaggerating the threat and not stopping to ask if the cure is worse than the disease.

In times like these, it is to be expected that the citizenry will look to the government for guidance and assistance.  When that happens in an environment of mass hysteria, then it is unsurprising that the state will take on or assume new power, as that is what has been demanded of it.  This historically has been the process which leads to the rise of authoritarianism.

Over the past four weeks and with little or no legal basis, one state governor has outbid another in their dramatic responses to the Coronavirus outbreak.  Invariably their actions revolve around the curtailing of individual freedom.

Arrest warrants are being issued for holding funeral services.

Fines are being levied for not maintaining proper distance, people are being arrested for holding gatherings of over ten people.

Fines and arrests are the order of the day for re-opening a business the state deems to be nonessential, and the national guard has been called out to enforce state borders and lockdowns.

Pastors have been arrested for holding worship services, and in New York City the mayor has threatened to permanently close any church, synagogue or mosque that violates his lockdown order.

The Second Amendment is under assault as 12 states either have ordered or are contemplating ordering all gun stores and retailers closed, thus depriving millions of their right buy a gun.

Neighbors and ordinary citizens, in the best tradition of the Soviet Union and Communist China, are being encouraged to inform the authorities if anyone they know is not adhering to state lockdown rules.

Stores, deemed essential by the state, are being told what in their inventory they can and cannot sell.

Congress, faced with the task of mitigating the economic plight of the citizenry, chooses instead to expand the federal government’s power and influence over the private sector through a massive and bloated $2.2 Trillion spending package.

Additionally, the politicians in both parties and the media, are clamoring for President Trump to declare a nationwide quarantine, nationalize industries, mobilize the military and in essence declare martial law.

President Trump, in contrast to the media’s portrayal of him, has not succumbed to these overtures, as he is among the few political leaders in the nation that respects the freedoms enumerated in the Constitution.  But his power over the individual state governors or Congress is limited.

The defenders of these authoritarian tactics say that these extreme measures are necessary in order to save hundreds of thousands of lives.  But is that just a fig leaf to permanently transform the society?

This is not to say that the Coronavirus is not a serious health issue and steps must be taken to protect the most vulnerable sector of the population — the elderly with significant medical conditions.

The number of people infected with the virus over the past 30 days continues to rise as the nation has dramatically expanded testing.

Of those who have died, approximately 1.6% of total infections, we do not know how many succumbed as the direct result of the virus or died of other ailments, as any death with the virus present is currently being counted as a Coronavirus fatality.  The Italian evidence, for example, suggests that only in 12% of deaths is it possible to say the Coronavirus was the main cause of death.

The Coronavirus started in China in early December of  2019; in the subsequent four months the virus has spread to 203 countries/territories and more than 46,000 deaths have so far been recorded. (For updated data, click here.)

In its 244-year history the United States has weathered seven of the worst pandemics in world history without the hysteria and loss of liberty and freedom.

All indications reveal that the Coronavirus will be exponentially less life-threatening than any of these previous pandemics.

Is the Coronavirus pandemic serious enough to:

*Warrant putting much of the nation’s population into house imprisonment?

*Wreaking the economy for an indefinite period of time?

*Prohibiting worshipers from attending their churches, or outlawing freedom of assembly and travel?

*Destroying businesses that have taken years to build up?

The nation is choosing to plunge millions of people into depression, heart attacks, suicide and unbelievable distress, though they are not especially vulnerable and will only suffer mild symptoms or none at all.

It is a nation in which the government can issue orders and edicts or convey preferences with no legal authority.  Yet, it appears the majority of the American people are willing to sacrifice their freedoms and way of life in order to empower such a potential police state in the guise of conquering a pandemic.

Governments never give up power once attained.  They only seek to normalize it and now they have in their toolbox the knowledge that the citizenry will meekly acquiesce to any national emergency being declared an existential crisis which requires government to unconstitutionally impose its will on the people.

Can President Trump stop the Fascist Deep State juggernaut before it becomes irreversible?

Steve McCann is a conservative writer who has published in The Spectator. American Thinker, and RealClearPolitics.