HILLARY IS GOING TO LOSE

[ssba]What does she stand for?  What are the genuine accomplishments in her life?  What new innovative ideas does she have to change the current direction of the country that two-thirds of voters think is wrong?

Then there are questions of ethics and morality.  Ereyesterday (8/28), Roger Simon laid out the stakes:

“The truth about the Clinton Foundation is already clear:  a medium to leverage Hillary Clinton’s position as Secretary of State for personal enrichment and global control by the Clintons and their allies.  To my knowledge, nothing like this has ever been done in the history of the United States government.

This means quite simply, that the United States of America has abandoned the rule of law. The election of Hillary Clinton—our own Evita—will make the situation yet more grave. Consider something so basic as how you raise your children in a country where the president is most probably an indictable criminal and most certainly a serial liar of almost inexhaustible proportions. What does this say about our basic morality and how does that affect all aspects of our culture?”

It’s been a long hot political summer, with the Lying Swine Media in a 24/7 feeding frenzy to demonize Trump and coronate Hillary as having already won before the campaign really begins.  As always, summer froth abates over Labor Day weekend, with campaigns beginning in earnest the day after – one week from today, Tuesday September 6th.

So with the LSM predicting the race for the White House is over before it begins, I figure I might as well join in.  My prediction is:  Hillary is going to lose.  She is going to lose, as Dick Cheney would say, “big time.”

Of course I’m going to caveat that big time – I’ve been wrong too many times before not to do that.  But let’s set the caveats aside for now.  Let’s first count the abundance of ways she’s going down for the electoral count.

The US economy sucks.  On Friday (8/26), the US government’s Bureau of Economic Analysis reported that US GDP increased by almost nothing in the 1st quarter, 0.8%, and barely above nothing, 1.1%, in the 2nd.

In fact, a number of analysts believe the numbers are fudged, that “sometime after the election” the BEA will again revise its numbers downward to reveal that “in 2016 the US was in recession.”

What is obvious to millions of un- and under-employed, the US employment figures are a total fraud.  Gallup calls it the Big Lie regarding unemployment.

The fact is that almost 95 million people are not in the labor force today, and the real unemployment rate is almost 10%.  Hillary has no program whatever enabling them to get real jobs.  She offers instead government make-work, more disability welfare, more rules and regulations hamstringing the economy.  Hers is an anti-jobs policy.

If people vote just their pocketbooks, Hillary is toast.

Note:  Be sure and get Nicholas Eberstadt’s new book Men Without Work: America’s Invisible Crisis, coming out next week.

She can’t win without the black vote.  Consider this observation on psephologist Nate Silver’s FiveThirtyEight site (538 being the total of votes in the Electoral College; get a majority of 270 and you’re president):

“Sky-high African-American support and engagement is crucial for Democrats. Suppose African-American voters were to return to pre-Obama, 2004 levels of turnout and partisanship (turnout down from 66 percent to 60 percent and support for Democrats down from 93 percent to 88 percent). In that scenario, Democrats would lose Florida, and their overall margin of victory would be cut by more than half in Ohio and Virginia, giving them almost no room for error with other groups.”

This is why Trump’s going straight for the black vote honestly without pandering is political genius.  He’s offering them opportunity, not gimmidats.  He has the guts to tell them the truth, that Dems have run their inner cities for 50 years or more, ruined their schools, destroyed their families, wracked their lives with crime, violence, and jobless poverty.

Millions of blacks know he is telling them the truth.  Asking them, “What have you got to lose?” as the truth of his words sink in is stone brilliant.  It kicks the Dems right in the nads, their most desperate vulnerability.

No wonder Shrillary is shrieking in rage, calling him and all his supporters KKK racists.  If Trump gets 15 to 20% of the black vote – which he will – she’s done and dusted.

Note two other observations in the 538 link.  The Latino vote is almost irrelevant – because most of it is in California and New York which will go Dem anyway, and Texas which will go Pub anyway.

Further, a small shift of just 3% from Dem to Pub (compared to 2012) in 538’s five demos (college whites, non-college whites, blacks, Latinos, Asians) would flip so many states (e.g. Florida, Ohio, Pennsylvania, Virginia) that Trump would win going away, 315 to 223 EVs.  A pretty low bar for The Donald to hop over.

Obamacare is dead.  When even the hyper-lefties at Vox.com admit this, you know Ocare is DOA.

Trump’s position, as stated yesterday (8/29): “America must repeal and replace this disastrous law or live under total government control.”

Hillary, of course, insists it’s working fine, but to correct it’s minor flaws the federal government must take full control of healthcare in America.  Her campaign website declares she will “Defend and expand the Affordable Healthcare Act.”

Only if voters don’t care about their health and what healthcare costs will they vote for Mrs. Obamacare.

No one really likes her.  In addition to being criminally corrupt, she’s also an odious shrew.  One of her fundamental qualities is an irredeemable unlikability – so much so author Ed Klein wrote an entire best-selling book on it:  Unlikable: The Problem with Hillary.

In this sense, she’s the anti-Clinton compared to Bill, whose unmatched likability was so overwhelming he, as one Congressman told me, “could charm your socks off while he was peeing down your pants leg – it’s almost impossible not to like the guy.”

Hillary is the opposite – it’s almost impossible to like her.

No one trusts her.  Only 11% of voters think “Hillary is honest and trustworthy.”  The vast, vast majority of the electorate think she is a lying, dishonest, deceitful grifter.  The Clinton Foundation scandal making headline news now will compound this on steroids.

When you put all her personality characteristics together, you get Obama advisor David Plouffe’s “clinical definition of a psychopath: grandiose notion of self-worth; pathological lying; lack of empathy and remorse.”

Which brings us to yet another reason Hillary will lose:

The Lying Swine Media’s fanatically deranged bias will backfire.  It’s already on the level of caricature – of which Plouffe is the perfect example.  His description of psychopathy he claims is of Trump, but you can’t get a more compactly precise description of The PIAPS.

Pat Caddell is a rare political species, an honest Democrat.  Yesterday (8/29), he talked about the “jihad” of the media against Trump and what it meant.

“The major news media in this country, the mainstream media, is essentially serving against the people’s interest. They have made themselves an open ally of protecting a political order that the American people are rejecting, by three quarters or more of the American people.”

All of the above is not going away, it will get louder and increasingly unavoidable.  The memes of her being criminally corrupt, of representing the political elite and the status quo, of having no new ideas to fix America’s many ills, of being unlikable and untrustworthy, of being a liar and a crook, all will become entrenched in voters’ minds.

It’s well known to election historians that US presidential elections are in very large part a referendum on the party in power.  If a majority of the electorate think the party (meaning the president) has done a good job, they will keep it in power.  If they don’t, they will not.

Thus Hillary’s greatest liability:  She has no choice but to run for essentially an Obama third term – more of the same for the last eight years.

This is the highest hurdle of all.  As Caddell says, 2016 is a “change election.”  Americans want a different direction than the one we’ve been down on.  If Hillary is anything, she’s not that.

Now for the caveats.  First and foremost is voter fraud.  Dems are masters of it – just look at the hysteria they whip up denouncing Voter ID.  Anyone against Voter ID wants voter fraud and for the Dems to get away with it.

This time Dem Voter Fraud may go far beyond anything we’ve ever seen.  It’s rigging electronic voting machines we need to worry about.  Look at this report today (8/30) on how the Feds may designate state voting systems as “critical infrastructure” requiring them to seize control of them.

The second main caveat is Trump himself.  He’s dug himself into a deep hole with many voters, and he has to climb out of it to overcome their reluctance to go for him even though they may distrust or despise Hillary.

For all of August, he’s stopped digging and been steadily climbing instead.  He’s got to maintain his new self-discipline and keep this up for two more months.

The third caveat is September 26th.  The first Trump-Clinton Presidential Debate will be the most watched event in the history of human communication.  Will we see the real fight that everyone wants, or a snoozer of cautious sparring?

Will she have coughing spasms?  Will Trump have learned how to trigger one of her seizures?  Will she have imbibed too much of her favorite refreshment – JD Single Barrel – to calm her nerves?  Or will she hold it all together, play rope-a-dope, and avoid Trump laying a glove on her?

There are three debates – Monday September 26, Sunday October 9, Wednesday October 19.  Who scores the most knockdowns at the end of three rounds wins.  You have to bet that will be Trump – but they don’t come more eel-slippery than a Clinton.

So here’s the bottom line.  The preliminary summer jousting is soon over.  At this point, just before the campaign and the voters’ attention on it becomes real, the odds are that Hillary is going to lose – and that those odds will get progressively higher over the next two months.

One of the caveats may override this.  There may be one or more Black Swans changing everything.  Nonetheless, I’m betting at this moment I’ll wake up the morning of November 9th with a birthday present of a President-Elect Trump.

Here’s one more reason why: 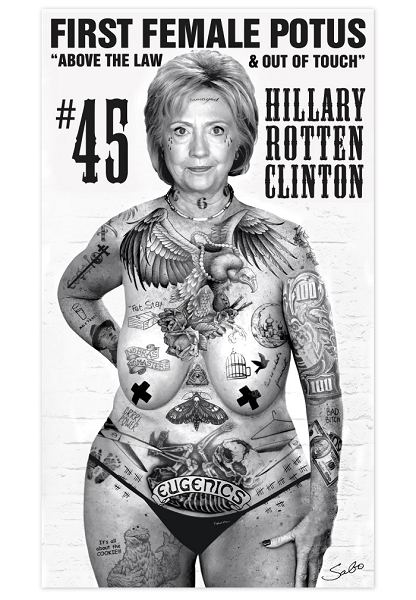 In the wee hours of yesterday morning (8/29), over two dozen of these posters were on display at various street locations in Hollywood and West LA by street artist Sabo.

There’s a lot going on, but note the 6-6-6 tattooed around her neck, Saul Alinksy on her right forearm, $100 dollar bills on her left, a vulture, a skeletal fetus about to be cut by scissors, a wire hanger, and more.

“This woman is a Saul Alinsky trained Beast who has zero regard for the unborn and the law. She’s all about the Benjamins, GRRRL POWER, and death. What’s she holding behind her back, a knife, a gun, the head of Bernie Sanders? I don’t want to know.”

Hillary Rotten Clinton is seriously un-hip, revoltingly not cool.  She’s a 70 year-old hag, rotten to the core.  Young Millennial voters are being increasingly repulsed by her.  She is going to lose, and lose big.

But yes, like you, I can hardly wait for September 26th.