2 The Point News » Guest Authors » Members Only » HEY JOE! IF THE NEW COVID VARIANTS ARE SO DANGEROUS, WHY HAVEN’T YOU CLOSED THE BORDER?

HEY JOE! IF THE NEW COVID VARIANTS ARE SO DANGEROUS, WHY HAVEN’T YOU CLOSED THE BORDER? 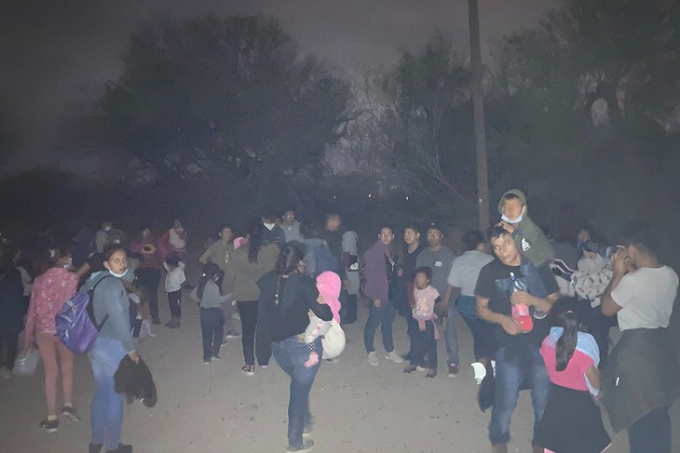 Joe is worried about the Delta variant of Covid.  His health experts tell him it’s more transmissible than the original.  Yet he continues to encourage a flood of illegal untested aliens across our southern border.

If Delta is not dangerous, he has an excuse on the border.  If it is, he doesn’t.  He can’t have it both ways.  But then, having it both ways is what Democrats always demand.

Currently, the Delta variant is raging in the UK. Yet Prime Minister Boris Johnson has announced that all COVID-19 restrictions will be lifted in the country on July 19, including masks, social distancing, and smartphone apps.

The government will make the final decision on July 12, but Johnson said the country needs to move to a philosophy of personal responsibility and learn to live with the virus. It seems even he is not held captive by rising case numbers anymore in the absence of significant severe illness.

New information from Israel could be why. Israel, which has been dealing with the Delta variant for a while, indicates that the new COVID-19 variant is not making people seriously ill as often as previous waves. Eran Segal, a computational biologist at the Weizmann Institute, analyzed the data and reported:

Researchers earlier in the pandemic asserted that COVID-19 could become as benign as the common cold. This view had as much to do with the tendency of viruses to evolve this way as it did with cumulative exposure beginning in childhood building immunity.

Yet the typical talking heads, including Dr. Anthony Fauci and Dr. Leana Wen, were on the corporate media channels over the July 4 holiday weekend urging caution. Fauci has even recommended vaccinated people wear masks again when traveling to areas with low vaccination rates.

This advice seems strange if vaccines are effective in preventing severe illness from the Delta variant.

And now a new variant, Lambda, is on the horizon. We seem to have skipped quite a few Greek letters here, but this is another COVID-19 “variant of interest.” Jairo Mendez-Rico, a WHO virologist, told the German outlet Deutsche Welle the following about the new variant:

“So far we have seen no indication that the lambda variant is more aggressive. It is possible that it may exhibit higher infection rates, but we don’t yet have enough reliable data to compare it to gamma or delta. Although it is possible, currently there is no indication that variants are more dangerous and lead to increased mortality. It is likely that SARS-CoV-2 will become more transmissible throughout the course of its evolution but not necessarily more damaging to the host.”

Lambda originated in Peru and now accounts for 82% of cases in the country. It is present as far north as Mexico. Other variants are popping up in the region and may continue to during the winter:

Latin America — with more than 1 million coronavirus deaths already — could become the new epicenter of coronavirus variants. In Colombia, for instance, the highly contagious B.1.621, a variant of interest first detected there in January, is increasingly spreading.

The combination of overwhelmed health care systems, populations working precarious jobs without much opportunity to adhere to safety precautions, and a lack of vaccines have proven a perfect breeding ground for the lambda variant.  Peruvian virologist Pablo Tsukayama told Dutsche Welle:

“Chile has vaccinated 60% of its citizens, but that is an exception on the continent. It is very likely that new variants will appear during a third wave of coronavirus infections during the South American winter between July and September. They may not be any more lethal but they will definitely be more communicable.”

The Biden administration has a choice. If variants are something we need to take very seriously, it should seal the southern border immediately, using the military if necessary. The U.S. should restrict travel from Latin America now.

If the Biden team doesn’t take these steps, and COVID-19 variants are of significant concern, the administration is prioritizing politics over the health and well-being of Americans – which is SOP (Standard Operating Procedure) for Democrats.

Or the administration can adopt the view of Mendez-Rico and scientists in Latin America. Variants may tend towards higher rates of transmissibility. But as Israel is finding with Delta, new variants of COVID-19 will tend towards being less virulent. Taking this view would be consistent with our experience with other viruses.

However, Biden can’t have it both ways. Because of a more contagious virus that appears to be less virulent, according to Israeli data, Los Angeles residents are required to mask again. Dr. Fauci is telling vaccinated people to mask again because of the Delta variant of COVID-19.

All the while, illegal immigrants from Latin America pour over our southern border, potentially bringing new variants with them.

The administration is giving some wildly mixed messages on how seriously we should take variants with the lax border policies. It is no small wonder most Americans are no longer listening.

Stacey Lennox is a retired Fortune 500 company healthcare project manager for all of North and South America.