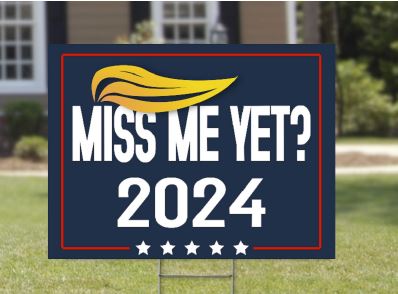 You’re American citizens, with the right to vote in presidential elections. You’re grownups with no excuse.

For four years, we had a president who, over the course of a single term, managed to undo a great deal of the mischief wrought, and a great many of the mistakes made, by his recent predecessors.

But, for you Biden voters, he had a personality that rubbed you the wrong way. He wrote nasty tweets. In the language of TV production, he was too “hot.” You wanted “cool.”

The Democrats put up a candidate who was plainly in mental decline. It was obvious every time he spoke. But you didn’t pay terribly close attention to him – you certainly didn’t attend any of his rallies! Only a literal handful of people ever showed up at them.

The sources from which you get your “news” carefully clipped out all of the bits of his appearances in which his befuddlement was manifest. If you heard someone speak out about his senility, you dismissed the charges out of hand.

Biden also had a less-than-stellar professional history. He’d spent decades in the Senate as little more than a fixture, an empty suit, a vapid smiling shill for the credit-card companies and other corporations based in his shabby little state.

In the lead-up to the 2020 election, mountains of evidence were made public indicating that Biden was even more deeply corrupt than we already knew, taking massive bribes from nefarious foreign powers.

Yes, that story was banned from social media. Still, you could have known about it if you’d had the slightest bit of curiosity—and the slightest sense of civic responsibility.

For years, your trusted news sources fed you lies about Trump and Russia. Those lies, which anyone with any sense recognized from the outset as preposterous, were finally disproved. But your sources never showed remorse or shame.  Did you in believing them?

Most of your media never even corrected their stories—not really, not with any class or conviction. They just moved on—smoothly, slickly, smarmily—to other slanders, such as the ludicrous case of the Trump’s phone call to the president of Ukraine.

If you’d really been paying attention, you’d have noticed at least some of this. But you were as caught up in (or playing) the shell game as they were. It didn’t matter to you that Trump was exonerated. In fact, you really didn’t care what was true and what was false. You just wanted more reasons to hate him.

It was the whole Emmanuel Goldstein thing, right out of Nineteen Eighty-Four. If you don’t get the reference, read the book.

So it went. Year after year during the Trump era, you didn’t bring an ounce of reflection or judgment or self-examination (why did you hate Trump so much?) to bear on anything.

When your sources told you that Trump was alienating our foreign friends by pressuring NATO members to pay up, you bought it without applying the slightest bit of common sense to the situation. When several of those allies did pay up, and NATO Secretary-General Jens Stoltenberg thanked Trump effusively for making the alliance stronger, you didn’t care.

Or maybe you didn’t even hear.

But even if you did hear, such accomplishments just didn’t do it for you. What mattered in your book was that Obama was suave and Biden was grandfatherly or something, while Trump was a blustering loudmouth. He walked in front of the queen! He threw his weight around at the G7! Remember him staring Angela Merkel down while crossing his arms! How uncouth!

You looked down on Trump voters. “How can you be so stupid?” you actually asked us to our faces. Because you saw Trump as stupid. You weren’t able to explain how somebody stupid could achieve the kind of spectacular success he did in New York real estate. You also saw him as evil—which meant we, his supporters, were evil, too. How, you demanded, could we be so evil?

It never occurred to you to reflect on the fact that Trump the businessman had never been accused of racism or homophobia or any of the forms of bigotry of which Trump the candidate and Trump the president was accused every day.

It never occurred to you that those of us who hadn’t taken Trump seriously when his campaign began, but who later cheered him on enthusiastically, might have been paying closer attention—or might know more, or both—than you did.

It never occurred to you that knowing some history might count for something. Nor did you once step back and ponder the fact that your own interest in politics, in most cases, dated not much further back than the first presidential run of the glorious Barack Obama, whom you loved not because of anything he did or said but because—well, need it be spelled out?

Anyway, you railed against Trump. But Biden? You showed no interest in knowing who Biden really was. You were so full of hatred for Trump—a hatred reinforced every day by the rote lies you heard from your sources on CNN, MSNBC, and elsewhere—that you took it for granted that Biden could only be better.

You went by the most superficial of impressions. He looked presentable. He looked like a senior senator from Central Casting. He didn’t yell onstage. He didn’t swagger. He spoke slowly, in a low voice. (And eventually, he even started to whisper!) You liked that.

Clearly you don’t like Alpha Males, for that’s what Biden is exactly not. Most likely you saw Trump as a wellspring of toxic masculinity.

It never occurred to you, apparently, that in a complex and dangerous world, it might be a good thing for the most important and powerful country to have a strong, self-assured, can-do individual at the helm—a man who knew how to reassure allies and strike fear into enemies.

But, no, Trump’s enemies in the media told you that he alienated allies. Biden would win them back. Biden was pleasant. Biden was liked. And you bought it.

You seem to have viewed the world as something not unlike some old-fashioned ladies’ sewing circle, or a children’s soccer team, where the idea is to get along and work together, and where a boor or a bully can be taken aside by the others and told to be nice.

You didn’t – still don’t? – have a clue about how power works in the real world. You should have. To repeat: You were a grown-up. You had no excuse.

Trump understood power. He’d made his fortune in the toughest arena in American business: New York real estate. His experience in the private sector made him a perfect choice for president: for four years, he used the talents he employed to make himself rich to make America great again.

But you didn’t see it, or refused to.

Biden was rich, too. Not as rich as Trump, but plenty rich. The difference was that he’d amassed his millions not through hard work or talent but by selling his influence. Like many another politician, he whored himself out, betraying his voters, his state, and his country.

But what did that matter to you? You acted as if you were voting for a morning talk-show host or veteran local news anchorman. Or a maître d’.

It’s as if you didn’t even have a concept of the role a president of the United States plays on the global stage.

Well, now you know. At least I hope you know. If you don’t know now, you never will. And if you’ve still managed to miss all the obloquy heaped on the man you voted for—well, congratulations. That’s quite an achievement in self-delusion.

Thanks to you—yes, you Biden voter, look in the mirror! —Biden, in the eyes of military experts around the world (and, for that matter, the eyes of anyone on the planet with an ounce of sense), has pulled off the most disastrous military operation in modern times.

As a result, America has reached perhaps the lowest point in its history, and lower ones will soon be coming.

In doing so, he’s dramatically increased the likelihood that China will invade Taiwan or that Russia will invade some place in Eastern Europe. Commentators who a couple of weeks ago were still covering up for Biden are now admitting that he’s beyond incompetent and that this single event could spell the end of America as a superpower.

There’s an assumption going around that any cognizant, conscientious Biden voter must now, at long last, be feeling buyer’s remorse. But I suspect otherwise.

Of all of you Biden voters, the one I know best has just celebrated on Facebook the fact that Rachel Maddow—the individual who has perhaps done more than anyone to demonize Trump and whitewash Biden—has signed a new contract with MSNBC.

So I guess even the catastrophe in Kabul isn’t even enough to make you rethink your vote. Even now, you’re still not through coughing up your anti-Trump bile.

I guess that the question, then, is this: will you ever be?  Are you going to come to your senses or not?

In the times to come, as you witness the consequences of Biden’s incompetence, will any of it affect your opinions? Years from now, will you be crawling around the rubble in the remains of the world whose destruction Biden has precipitated and still be howling about the evil that is Donald Trump?

I sincerely hope, for the sake of your psychological and moral well-being, that you will have not chosen that fate.

Bruce Bawer is the author of While Europe Slept, Surrender, and The Victims’ Revolution.