2 The Point News » Kelly's Panorama » Members Only » HE CHOSE WISELY

Democrats, so demented with hate they are morphing into violent Nazi Fascists, have chosen poorly.  The President by contrast has chosen wisely.

It should be embarrassing to some social conservatives that they refuse to see this.

An additional cross President Trump must bear as he battles Democrats, the MSM, the entrenched bureaucracy and the GOPe to make America America again is supporters suffering severe brain fog.

Madison_con, alas, is typical of many:

“Barrett would have energized conservatives to vote in Nov. Kavanaugh does nothing. Instead the left will be energized. Puts House at risk with this vanilla choice.”

It’s okay to be disappointed the President didn’t nominate Amy Coney Barrett for the vacancy on the Supreme Court. Many conservatives were. But this analysis is so puerile it could have been made by CNN.

If Brett Kavanaugh is confirmed before the start of the October term, how, exactly, would that energize the left to vote?

The opposite is true. Because leftists rely so heavily on judicial ukases to advance their agenda, the failure of Democrats to defeat the nomination very likely will depress leftist turnout, because many moonbats will think the game is over.

This is especially so because Dems and the Lying Swine mislead moonbats into thinking “activists” can derail the nomination. They’ll hold protests, screech a lot, stalk GOP Senators, do other obnoxious things that peeve normal Americans, only to see their efforts end in failure. That will be deflating.

If conservatives who don’t suffer brain fog aren’t yet excited about this “vanilla” choice, they will be once they hear what leftists are saying about him.

If Kavanaugh is confirmed, he’d be the second most conservative justice on the court, says Axios. 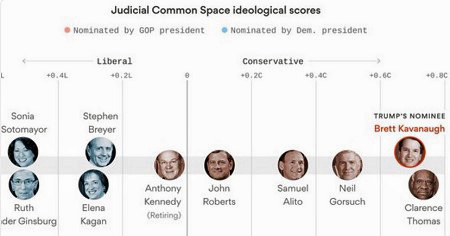 Fauxcahontas is upset because Kavanaugh said her baby, the Consumer Financial Protection Bureau, is unconstitutional.

“The nomination of Judge Brett Kavanaugh will threaten the lives of millions of Americans for decades to come,” said former VA governor and Clinton crony Terry McAuliffe.

In hindsight, we can see why President Trump chose wisely for Kavanaugh over social conservative favorite Amy Coney Barrett.

One key is that the president wants his nominee confirmed and on the bench by the start of the October term.  Right now, POTUS needs all Senate Pubs on board.  If there’s a Red Wave as expected in November with a greater GOP majority, he won’t need them all.

That means when Ruth Bader Ginsburg retires, which everyone thinks she will soon, Barrett as her obvious female replacement will be far easier to confirm.

I noted in the HFR last week that Barrett would be the hardest to confirm now, because pro-abortion GOP Sens. Susan Collins and Lisa Murkowski would be most likely to defect over her.

Remember there are only 51 GOP Senators, and that in addition to Collins and Murkowski, one of them is John McCain.

Kavanaugh, on the other hand, is the easiest to confirm. It’s an advantage that former President George W. Bush praises him to the skies. Odious NPR Supreme Court reporter Nina Totenberg grudgingly acknowledged Kavanaugh is very well qualified. So did unctuous NBC political editor Chuck Todd.

Collins and McCain issued statements indicating they’ll stay on side.

“In selecting Judge Brett Kavanaugh to fill the vacancy left by Justice Kennedy, President Trump has chosen a nominee with impeccable credentials and a strong record of upholding the Constitution,” Maverick said.

If Collins and McCain stay onside, so will Murkowski. And at least one of these Dems – Tester, Heitkamp, Donnelly, Manchin, Jones — likely will vote for Kavanaugh, because their political future depends on it. Polls in these battleground states indicate substantial majorities want Kavanaugh confirmed.

We shouldn’t express certitude about future events, but Kavanaugh looks like a done deal.

Another consideration of the President’s is that while Barrett is a newbie with only eight months on the federal bench, Kavanaugh already is regarded as an expert on administrative law by justices on the Supreme Court. He’d be immediately influential there.

If your foremost objective is draining the swamp, disassembling the Deep State is more immediately important than restricting abortion.

If Roe v. Wade were overturned, it would be left to each state to regulate abortion (as it should be). In blue states like California and New York, where most abortions are performed, there would be no change in laws.

Kavanaugh, who is also a Catholic, is as opposed to abortion as is Barrett. He just hasn’t been as outspoken about it.

In addition, the president may think Kavanaugh can better handle all the garbage Democrats will throw at him in the confirmation hearings than Barrett could.

Trump and Pence talked to the prospective nominees. We didn’t. It’s entirely possible Barrett didn’t want to put her family through the confirmation ordeal at this time.

This nomination is the one that puts a conservative majority on the court. As noted, Barrett will have an easier confirmation next time.

So it’s time to think of how many next-times for Trump will there be?  Definitely one, almost certainly two, probably three more (yes, in addition to Gorsuch and Kavanaugh already).

Ruth Bader Ginsburg is 85, and is very, very sick.  With Kavanaugh confirmed, RBG may hang it up before she croaks. She’s been holding on by her fingernails in the hope leftists might regain control of Court. That hope is now gone.  Kavanaugh gives the constitutionalists a majority. There’s no practical difference between losing 5-4 and losing 6-3.

With RBG gone, Justice Stephen Bryer may follow.  He turns 80 next month (August).  Why spend your 80s losing fruitlessly? Further, there is no practical difference between losing 6-3 and losing 7-2.

Although Clarence Thomas is ten years younger than Bryer (he turned 70 last month (June), there are rumors he’s like to retire.  He’s still vigorous, however, and may well decide to spend his 70s having the best time of his life restoring the Constitution to American jurisprudence with his fellow constitutionalists.

Then again, after Trump’s reelection and before 2024, he may choose to turn over his seat to a safe Trumpian replacement.

Just spitballing here, but what if Barack Obama is not a natural born citizen, and there is conclusive, unassailable proof he was never eligible to be president?

Would that mean all of Obama’s appointments are invalid?

I have no idea what the law would be. Nothing like this has ever happened. But it’s certainly arguable that nominations made by an ineligible president are, or should be, null and void… and we’d have a conservative majority on the Supreme Court to make the final judgment.

That could mean saying goodbye to Kagan and Sotomayor – and to a whole bunch of leftist circuit court and district court federal judges.

By that time the Left will have been reduced to rubble with so much losing.  There’s no practical difference between losing 7-2 and losing 9-0, but it sure would make the rubble bounce.