HAS THERE EVER IN US HISTORY BEEN A MORE PITIFUL CABINET 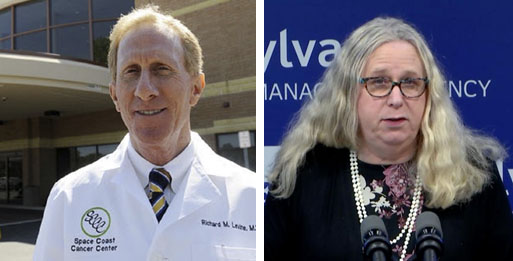 Susan Collins and Lisa Murkowski have once again betrayed the American people and voted to confirm one of the most insidious persons ever nominated to a Cabinet position, Richard “Rachel” Levine.  He will now be the assistant secretary of health.

(Yes, the photos above are of the same person.  Richard was married with children until he decided at age 52 to pretend he was a woman named Rachel.  He is now 62. – JW)

Levine was as toxic as N.Y. Gov. Cuomo when it came to rendering Pennsylvania nursing homes super-spreaders of COVID, but he put his own mother in a hotel.  He knew what he was doing as surely as Cuomo did.

There is much to condemn this appointment, but most serious is Levine’s promotion of medication and surgery for pre-pubescent children with gender dysphoria.  Sane people realize that this is perhaps the most despicable form of child abuse that has currently won favor among trans activists.

Surely, both Murkowski and Collins know full well that the vast majority of the American people do not support such extremist views, but they apparently wanted to appear to be sufficiently “woke.”

We are all beginning to realize, too late, that being woke is a form of mass hysteria meant to undermine every essential tenet of Judeo-Christian values.

Being “woke” means adopting the new rules of the cancel culture, remaking America according to the whims of BLM and Antifa.  BLM is a Marxist, anti-American, anti–nuclear family organization that is specifically pro-transgender.

So Collins and Murkowski have revealed their inner anti-Americanism, a blatant betrayal of their constituents.

The question of the day is, why have any Republicans voted to confirm any of Biden’s Cabinet appointees?  Every one of them has been chosen not for their expertise in any sphere of influence, but for their radicalism; the farther left these people are, the better in Biden’s (?) view.  Xavier Beccara probably belongs in prison.

Our new Attorney General Merrick Garland could not admit that crossing the border illegally is in fact illegal.  He actually said the Antifa terrorists who tried to burn down a federal courthouse in Portland were not terrorists because they did it at night!

Secretary of state Blinken made an utter fool of himself, and thus the U.S., at his meeting with the CCP representatives in Alaska.

And then there is the hapless Alejandro Mayorkas, the new secretary of DHS.  He is our very own Baghdad Bob.  “No crisis at the border,” he keeps saying.  The man is so unqualified for the job to which he’s been appointed that it would be laughable if it were not so deadly serious.

Lloyd Austin as secretary of defense!  His job is apparently to purge the military of any and all Christians and conservatives.  He has vowed to protect us from all those Trump-supporters he and the Democrats have decided are domestic terrorists.  He’s already sent troops to Syria and stopped those who were set to return from Afghanistan from coming home.

Chances are we will be at war somewhere soon.  We can feel the Democrats itching for it.

And then there is Little Peter Buttigieg as transportation secretary.  This guy could not run the city of South Bend, Indiana as mayor, and Biden has put him in charge of one of the most crucial agencies.  This will not end well.

There are many more equally deficient nominees.  Most have been confirmed with the help of enough effete and cowardly Republicans who fear bad press more than they fear the destruction of this nation.  They cannot imagine the contempt conservative Americans feel for them, each and every one who has voted to confirm these pathetic, wholly unqualified nominees to such high-level jobs.

The most terrifying appointment of all is Kamala Harris, put on the ticket as V.P.  Now she of the inappropriate cackle that rivals Hillary’s grating laugh is to be in charge of the border crisis!  Just a week ago, when asked about it, she replied, “I haven’t been briefed on that.”  She is as clueless as she seems, as incompetent as she appears.

Biden created the border mess and likely did it on purpose.  The left likes nothing as much as it loves chaos.

Those poor migrants are just tools in their kit; they care nothing about the fact that they are providing the cartels with a $14M profit a day in human-trafficking.  It’s almost as though the cartels own Joe Biden as completely as China does.

We are no longer to be energy independent.  There are no borders, so we are no longer a sovereign nation.  Biden has put tens of thousands of people out of work — the pipeline, the wall, the 80 million acres of federal land he has declared no longer available for oil or gas exploration.

He is dispersing COVID-infected migrants into the interior of the country, most likely to create a resurgence of the virus so he can impose a nationwide lockdown again.

These executive orders are a gift of billions and billions of dollars to Russia.  As Peter Navarro commented, Russia is just a gas station with nukes.  Thanks to Biden, the Russians will soon be much richer.  So will China as they twirl old Joe and his pathetic Cabinet around their fingers.

Unless more Republicans decide to fight for what is right — the constitutional principles devised by the Founders — the United States will not last.  As for Collins and Murkowski?  A pox on both their houses.  They could not even stand tall for the children likely to be destroyed by the likes of Rachel Levine and his monstrous theories.