2 The Point News » Guest Authors » Members Only » HAS THERE EVER BEEN A MORE CRUEL, TONE-DEAF OVAL OFFICE OCCUPANT?

HAS THERE EVER BEEN A MORE CRUEL, TONE-DEAF OVAL OFFICE OCCUPANT? 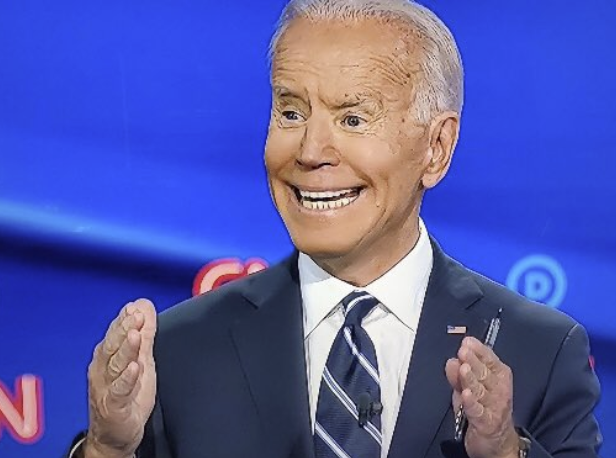 All that is left of Joe Biden’s never very bright mind is his viciousness.

Biden’s speech after the Buffalo mass shooting was as obscene as his speech in the wake of the school shooting in Uvalde, Texas was last night (5/24).

He was barely there — frail and blank, reading the teleprompter with no emotion until he got to blaming guns.  Then he yelled with thoroughly phony anger at all Americans who revere the Second Amendment.

It never occurs to leftists like Biden that had one or two or three of the staff at the market in Buffalo or the school in Uvalde been armed and trained, those nineteen children might be alive.  Israel figured this out decades ago.

If he ever had a soul, it’s long gone.  If he ever had empathy for others, that has never been evident.  Joe Biden has always and only cared about Joe Biden.

Those who have known him over the years most certainly know this; anyone who has known him well knows he is not a good man, all of which makes the people who installed him in the office of the president as heartless and power-mad as he is.

In the fifteen months he has been in office, he has nearly destroyed this nation.  In his mindless quest to “transition” away from fossil fuels, he has almost brought the country to a standstill.

No baby formula, gas prices nearly double what they were under Trump.  Diesel so costly, the truckers we all depend on for nearly everything cannot afford to fill their tanks.  So market shelves are becoming empty of products we’ve long taken for granted.

Almost every move or step Biden has taken seems calculated to do damage to the middle and working classes and to further enrich the already massively wealthy — the Pelosis, the McConnells, the Kerrys, the Bezoses, etc.  Those folks have become astonishingly wealthier due to the pandemic, a government-perpetrated hoax if there ever was one.

And this most terrible president cannot let a tragedy like the massacre in Buffalo and then in Uvalde, Texas go to political waste.

Since then, there have been over 900 incidents of gunfire reported on school grounds.

And the list grows when it includes mass shootings at places like movie theaters, houses of worship, and, as we saw just 10 days ago, at a grocery store in Buffalo, New York.

I am sick and tired of it. We have to act. And don’t tell me we can’t have an impact on this carnage.”

Does Biden ever speak worryingly about the carnage of hundreds of deaths that occur in gun-control Chicago every month?  No.  Did he spend any time decrying the deaths in Waukesha?  Nope.  To Biden and his handlers, deaths caused by minorities are justifiable unless their weapons can be blamed rather than the perpetrators themselves.  This brings us to the utter inanity of his latest speech.

“What in God’s name do you need an assault weapon for except to kill someone?  Deer aren’t running through the forest with Kevlar vests on, for God’s sake. It’s just sick.

And the gun manufacturers have spent two decades aggressively marketing assault weapons which make them the most and largest profit.

For God’s sake, we have to have the courage to stand up to the industry.”

People have an absolute right to defend themselves, by any means necessary.  But gun-grabbers like our leftists always blame the law-abiding for the bad acts of criminals.  Anyone with a modicum of common sense knows that the criminals will always find a way to get guns.

Common sense dictates that citizens are safer when the bad guys must assume that everyone might be armed.  Mass shootings do not occur in places where many people may be armed.

The Second Amendment is not the problem; anti–Second Amendment activists are the problem.  Mass shooters always choose locations where they know no one will be carrying a weapon.  The Colorado theater where the Aurora shooting occurred bore a sign saying, “This is a gun-free zone.”

Such shooters are mentally ill — deranged, even, but not necessarily stupid.  Most of them can read.  They laugh at the left’s anti-gun campaigns; it makes their mania so much simpler to indulge.

If there is one thing that characterizes the left, it is its lack of common sense.  There were two shootings last week, in New York and California, two states with the most restrictive gun laws.  Meanwhile, Illinois has very strict gun laws, too, but hundreds are killed each month in gang and other criminal violence in Chicago.

The same goes for Baltimore and St. Louis.  Biden gives no speeches about the tragedies of those deaths.  The gun laws Biden advocates, laws that would leave guns only in the hands of criminals, are a boon to the murderous crazies; they let them know where it is safe to kill people.

Biden talked and talked about unifying the nation, but he has, from day one, with every word and deed done the opposite.  He has brought this country to the lowest point in many decades, economically, culturally.  With his wide open border policy and evisceration of the military, his capitulation to China, he has made us catastrophically less safe.

Biden’s speech paid lip service to the families of the murdered children but only as an introduction to his angry rhetoric re: the gun lobby.  “It’s time to act.”  This from the man who supports letting criminals go free without bail but tortures those still imprisoned for being present at the Capitol on January 6.

He lied when he said that after the assault weapon ban, shootings went down.  They did not.

Joe Biden is the worst president in my lifetime for countless reasons, but his contempt for those of us who revere the Bill of Rights and the Constitution makes him the most dangerous.