Welcome to the Happy New Year HFR!  2018 here we come.  It’s going to be a triumphal year with our Happy Warrior in the White House… 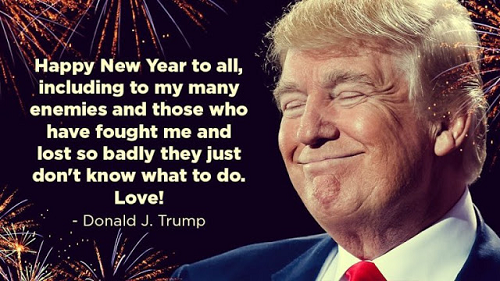 How can you not love a guy like this?  No President in US history has ever been deluged with so much hate, obstruction, and lies – and he’s overcoming it all with a smile.

That he has accomplished as much if not more in his first year in office as any of his predecessors is extraordinary.  That he accomplished all that in the face of such unhinged hate is miraculous.  And with a Cheshire cat grin.

Predictions about human behavior are only about possibilities.  We can know 100% for sure about things in the physical future, such as there will be a Full Moon on May 29, 2018, but not with our human future as it’s undetermined – too many decisions that have yet to be made, too many black swans that come out of nowhere.  The Crystal Ball is always cloudy.

So with that yuge caveat, let’s look at what 2018 futures are more likely than others.

Yesterday (12/28), the big headline at the top of Drudge was about this: 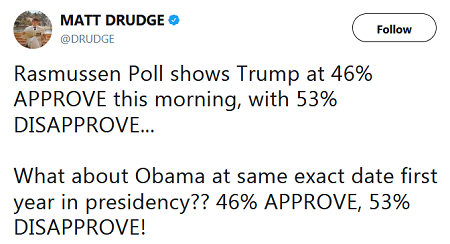 Yet on the previous day (12/27), the Drudge headline was about the Gallup poll showing Obama still being the most admired man in America as he has for the past 10 years.

Note, however (click on the link), who is right behind Zero’s 17% at 14% — you get one guess – while everyone else is way back in the peloton.  Pope Francis clocks in at 3% and it’s downhill from there.

Even if it’s a bad bet that leftie Gallup is not skewed for Zero, it’s a good bet that Zero’s popularity peaks with this poll, that it’s downhill for him from now on, landing in Pope Francis territory before long.

One reason among many others is that, according to Archbishop of the Catholic Church Luigi Negri, Zero conspired with George Soros in a plot to force Pope Benedict XVI to resign in 2013 and replace him with a Marxist Pope.

Thus at the onset on his presidency last January (1/22), the Catholic newspaper The Remnant issued an open letter to President Trump pleading that he open an investigation of the “Vatican regime change [from Benedict to Francis] engineered by the Obama Administration.”

There’s no question that, as The Remnant states, Francis embraces “the radical ideological agenda of the international left.”  He is a leader of the Cult of Global Warming, and advocates the open borders agenda of George Soros – even to the point of, on Christmas Eve last Sunday, comparing Joseph and Mary’s trek to Bethlehem with the migrations of millions of Moslems to Europe and Mexican illegals to America.

That’s only one of the many skeletons to come out of Zero’s closet next year, another being that Obama Was a State Sponsor of Terrorism, as detailed by Dan Sobieski (12/23).

The Death Rattle of Obama’s Reputation (TTP 12/27) will become deafening.

Note this comes from Justice’s OIG – Office of Inspector General Michael Horowitz.  On Tuesday (12/26), USA Today ran: The Quiet Probe into Clinton Email Investigation Could Be a Landmine for Robert Mueller.  The probe is that of Horowitz and his 500 OIG investigators, “whose mission is to detect and deter waste, fraud, abuse, and misconduct in DOJ programs and personnel,” according to the OIG website.

That his office has been steadily producing damaging leaks, drip by drip, on Mueller, Hillary, and Zero (the “scolds” link above being the latest) everyone is DC takes as evidence the OIG report will obliterate all three of them, together with Comey, McCabe, and other co-conspirators.

When will that be?  The USA Today story says months away. Yet in little more than two weeks, on January 15, the OIG is expected to deliver a preliminary report backed up by 1.2 million documents to Congress compiled in its year-long investigation.

Pubs in DC along with every conservative in America hope this will be the kill shot, putting an end to the Mueller witch hunt at the least, and at best calling for the criminal prosecution of Hillary, Comey, McCabe et al.  Dems and their media propagandists are terrified this may be.

As of right now, this is only a maybe.  The prelim report could be a gusher or a dry well.  We have to wait ‘till Jan 15.

We all want to see Hillary and Comey in orange jumpsuits, not only because it’s what they deserve, but also because only a shock of such magnitude is what it will take to stop the Dems’ hallucinating they are going to impeach Trump or force him to resign.

Yet as the Stones say, You don’t always get you want – but you might get what you need.

That is, the OIG leaks have already terminally damaged the Mueller Witch Hunt.  As the Washington Times reported on Wednesday (12/27), Democrats’ Case for Trump-Russia Grand Conspiracy Crumbles with Lack of Evidence.  Mueller is living in Oakland, California, where “there’s no there there.”

There are many similar calls from Congress.  The only way it now seems for Mueller to redeem himself is to actually do the job he’s paid to do regarding collusion to damage the 2016 presidential election – which is that done by Hillary, Podesta, the Democrat National Committee, and Zero himself.

As a Swamp Creature, will Mueller throw them under the bus to save his reputational hide, or stay in the swamp letting his “investigation” go out with a whimper (e.g., by prosecuting Flynn and Manafort for actions having nothing to do with Trump)?

One way or the other, it’s a very good bet that Mueller will not be the Great White Hope of the Dems to ruin the Trump Presidency.

Which brings us to the Main Event of 2018 in terms of US domestic politics.  Barring a knockout blow – Hillary’s and possibly even Zero’s criminal prosecution along with their numerous cronies – we’re in for a gloves off bare-knuckle slugfest between Trump and his foes that will make 2017 look like a pillow fight.

As Al Jolson said, “Folks, you ain’t seen nothin’ yet.”  2018 is the year TDS goes Full Pathological.  Newsweek magazine already has – which on Christmas Eve published “How Trump and the Nazis Stole Christmas To Promote White Nationalism.”

Note that the author, Cristina Maza, is white.  TDS has caused her to go Full Auto-Racist, so full of self-hate that unless she is cured of it by a competent psychotherapist, her only solution is suicide.

TTP may have to produce a T-shirt that says: If you hate yourself for being white, why don’t you just shut up and kill yourself?  If so, we’ll send one to Cristina.

By the way – you have bought a TTP IT’S OK TO BE WHITE T-shirt for yourself and all your friends, right?

The bottom line is that Dem-Left-Media TDS Insanity is going to get worse, because the better Trump does, the more deranged it will get.

Screaming Howie Dean got a jump start on this Wednesday (12/27) in claiming “Trump is running a criminal enterprise out of the White House.”

Leftards like Dean, as we know, compulsively project – as of course it was Zero who did precisely that.  As death rattle scandals like Obama-Hezbollah sink ever deeper into public awareness while Trump proceeds in repairing the damage Zero gleefully wreaked upon the country he hated – see How Trump Is Rolling Back Obama’s Legacy on Fox yesterday (12/28) – leftard projection is going to get evermore lunatic.

Here’s another bottom line:  a country smart enough to elect Trump is not stupid enough to accept such leftie lunacy.  You might want to print out and carry around this map to show any doubter just how smart.  This is a precinct map (not by county but voting precinct, far more precise) of the 2016 election – precincts carried by Trump in red, by Hillary in blue.  You can print it out in full size here. 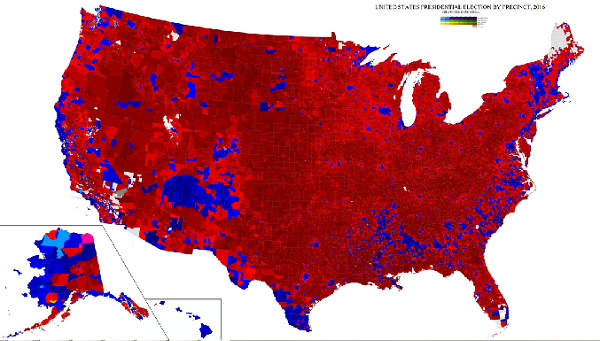 Thus it’s a good bet 2018 may be the year Left Insanities peak.  Note this means they are far from peaking yet.  In 2018, the Psycho Left Media will fanatically try to rebrand insanity as normal-moral and normal as insane-immoral.  In will be like 2017 on stilts and steroids.

For openers, California parents are now banned from opting out of their kids forced to read LGBT textbooks.  This is simply fascist child abuse.  Virtually our entire public educational system, certainly in blue states, is engaging in such child abuse.

At last some parents are fighting back, like Kristie Sisson and her husband in North Carolina, whose teenage daughter in extreme emotional turmoil as many teenagers are has been victimized by transgenderist self-mutilating masochism.

The bet here is that there is going to be a major cultural backlash in 2018 against “LGBT” child abuse, anti-white racism, auto-racism, anti-heterosexuality, anti-masculinity and the Left’s War on Men.  It won’t end these Insanities of the Left, but at least there will be a major pushback.

That also means the Sexual Harassment frenzy will cease being the current fad.  A man using his superior strength to physically force his unwanted desires upon a woman is assault and battery, a criminal offense as it should be.  But a man’s offensive behavior – crudely propositioning or joking, etc. – deserves an angry reprimand or a slap in the face, and that’s it.

No lawsuit years later in place of cowardice to stand up for herself at the time.

One very safe bet is that of The Hill, which yesterday (12/28) predicted in 2018: War Between Trump and Media to Intensify.

Yet the Washington Times reported yesterday that Half of All Americans Believe the Media Make Up Anti-Trump Stories.  Which they do since so many of their Hate Trump “bombshells” have been proven flat false.

So it’s a good bet that the Fake News Media’s credibility will continue to suffer, not Trump’s.  Which means we should watch for signs that some media folks get the memo.  Watch, for example, the reliably left Politico.

Yet last week (12/19), Politico broke the Obama-Hezbollah Scandal with a meticulously researched and sourced story, “The secret backstory of how Obama let Hezbollah off the hook.”  By itself, this destroys Zero’s foreign policy legacy.

And wow, did the Left Media Empire strike back, viciously smearing Politico and its author (who’s no right-winger for sure).

Politico is not about to become another Breitbart, but you may see a lot of anti-Trump newssites become less so next year.

As we approach New Year’s Eve, we have Newt Gingrich predicting an astonishing Republican victory in 2018, while Democrats are so confidant of winning back the House, and of Trump’s unpopularity, they are busy making impeachment plans.

The future doesn’t exist – it will only exist when we get there and not before.  Whatever happens, you can bet it won’t be all that you want when it arrives.  Politics really is like making sausage, it involves making deals that are give and take.  Realize though we have one of the greatest deal-makers in the world at the helm and he’s on our side.

Trump’s strategic genius is one main reason to bet with Newt and not the Dems.  The other is the economic boom – as in BOOM!! – of 2018 due to the Tax Cut, which Trump and the Pubs get all of the credit for and Dems none, combined with Trump’s massive regulatory repeal.

The New Year HFR thus concludes on an exceedingly optimistic note.  We’ll just have to see if it’s warranted.

Right now, however, your job is not to worry about 2018, but to have as much fun as possible this New Year’s weekend.  And what could better be of assistance in that regard than a marvelous New Year’s Eggnog?

This will guarantee a Very Happy New Year!

Ps:  There’s no room here for the possibilities of a 2018 Trump foreign policy.  That’ll have to wait until next week.  We could note however that today (12/29), the Daily Mail is reporting thousands of protestors in Iran are demanding regime change from the mullahs.  Now who could be inspiring them to do this?