“He’s hot with ram induction but it’s understood, I got a fuel-injected engine sittin’ under my hood…

The Beach Boys’ 1963 rocker Shutdown is the POTUS theme song today – and the music is as cool as ever.  (Proof: here they are performing at a concert in Japan in 2012 – 49years later with teenagers screaming as before.  Shutdown starts at 1:50.)

‘Tis the week before Christmas and Santa has a mixed bag for us, nice presents along with lumps of coal.  Let’s see what he’s got. 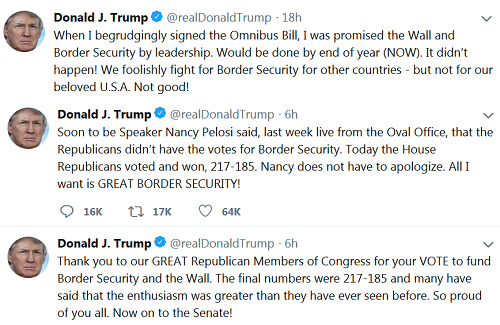 “Right, on to the Senate Graveyard where Schumer has the veto, as McConnell won’t end the filibuster rule with 50 votes plus Pence.

Make no mistake, this is The Schumer Shutdown: 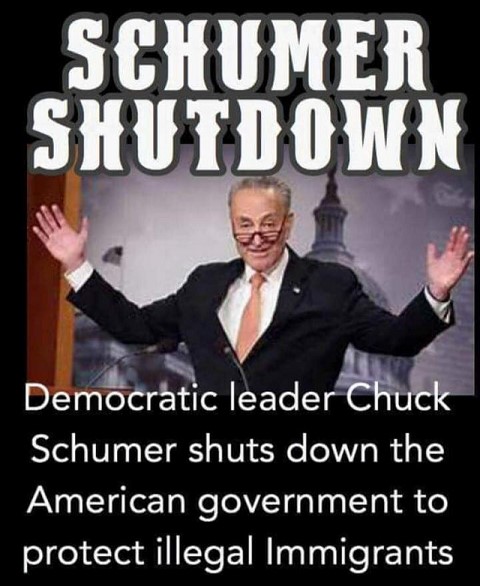 To cut McConnell some slack, he needs every Pub vote to kill the filibuster rule and Slimeball Rinos like Flake and Corker may vote with Schumer.  Senator Steve Daines (R-MT) says go for it, with POTUS cheering Mitch early this morning (12/21). 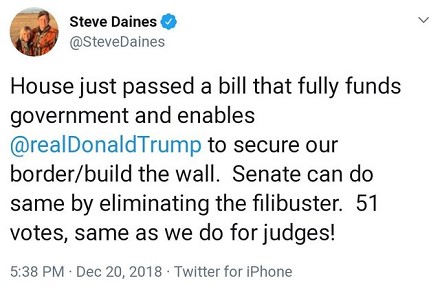 Unfortunately, suspicions confirmed, McConnell canceled the vote this afternoon as too many Rinos against it.  POTUS responded:

One question, however, is why POTUS won’t go nuclear as well.  His one-trick pony argument is “Border Security!” over and over, but the real issue is why the Dems don’t want it.  POTUS never even asks the question, much less answers it.

And we all know the answer, as does everyone in DC and most especially the President.  Dems want illegal aliens to flood across an open border to use them as illegal votes in gargantuan Voter Fraud.  Proof came in the election last month with dozens of Dems fraudulently elected to Congress.

“Immigration” and “The Wall” are not the most important issues our country faces.  They are like sticking fingers in the dyke when the lake behind is massively flooding over – you have drain the lake before the dyke breaks.

For even if we stopped all illegal immigration 100%, we’d still have tens of millions of illegals already here – with millions of them illegally voting Democrat.  2018 was just a Dem Voter Fraud Trial Run for 2020.  Dems are planning on institutionalizing full totalitarian one-party rule via voter fraud on steroids in 2020.

That is America’s most mortally critical issue right now, which is why proof of US citizenship must be a requirement for voting in the federal elections of 2020.  Along with ending other Dem frauds like early voting, same day registration, ballot harvesting, provisional ballots, absentee ballots for anyone (not just military/diplomat) et al.

The War on Democrat Voter Fraud needs to start now – and POTUS is the one to launch it.  The Schumer Shutdown gives him an ideal opportunity to do so.

In this regard, huge kudos to the North Carolina legislature that yesterday (12/20) voted Voter ID into law overriding Dem Governor’s veto.  Libtards are making the usual noises and filing lawsuits, but it’s now a state constitutional amendment (passed by 55% of voters), so harder to fight.

Yesterday afternoon, POTUS signed the massive Farm Bill into law.  He felt so good about it that he tweeted a minute-long clip of his singing “Green Acres” at the 2005 Emmy Awards with actress Megan Mullally.  He was having fun and so should we – a multi-billionaire President of the United States with a great sense of humor about himself.  Hard to beat.

So where’s the misalignment?  What triggered this?  Obviously – as just about everyone in the Pentagon today will tell you – is POTUS’ decision to withdraw from Syria the day before (12/19).  The President defended his decision in a series of tweets:

“We have defeated ISIS in Syria, my only reason for being there during the Trump Presidency…

Getting out of Syria was no surprise. I’ve been campaigning on it for years, and six months ago, when I very publicly wanted to do it, I agreed to stay longer. Russia, Iran, Syria & others are the local enemy of ISIS. We were doing their work. Time to come home & rebuild…

Does the USA want to be the Policeman of the Middle East, getting NOTHING but spending precious lives and trillions of dollars protecting others who, in almost all cases, do not appreciate what we are doing? Do we want to be there forever?

Time for others to finally fight, Russia, Iran, Syria & many others are not happy about the U.S. leaving, despite what the Fake News says, because now they will have to fight ISIS and others, who they hate, without us. I am building by far the most powerful military in the world. ISIS hits us they are doomed!

Trouble is, this has little to do with ISIS.  It has to do with a phone conversation Trump had with one of the most evil America-hating enemies we and the entire West have on earth on December 14 – and to whom in that conversation against the fierce objections of his National Security Advisor and Secretary of State he “quickly capitulated.”

That would be the Islamist dictator of Turkey, Recep Tayyip Erdogan.

Note neither John Bolton nor Mike Pompeo have said a word about Trump’s decision.  No wonder Mattis resigned in disgust.  Trump has just turned over all Northern Syria to Turkey, whose soldiers are now free to commit genocide upon our allies the Kurds.

Erdogan is an Islamic Fascist determined to impose an Islamist tyranny upon the Turkish people, and complete the goal of the Ottoman Sultans of conquering Christian Europe for Islam by flooding Europe with Moslems.  Trump should have kicked Turkey out of NATO the day he took office.

Instead, he has not said a single word of criticism of Erdogan while president, honoring Erdogan in the Oval Office four months into his presidency (May 2017), and treating him like an old friend at the Buenos Aires G-20 three weeks ago (12/01): 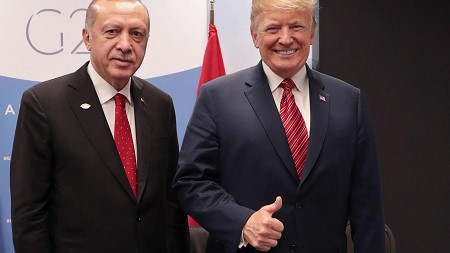 Is POTUS unaware he is standing next to the main supporter of ISIS, a genocidal maniac who wants to murder millions of Kurds, who has a murderous hate for him personally as a Moslem terrorist hates all infidels?  You can be 100% confidant Bolton among others has made sure he knows.

Yet he capitulated to Erdogan anyway and sold our America-loving allies the Kurds straight down the river.  I have not talked to Bolton about this, he may try his best to hang on and talk sense into his boss, but don’t be surprised if he doesn’t quit like Mattis.  This is the worst foreign policy act of Trump’s presidency.

Oh, and recall that it was the Kurds that defeated ISIS in Syria – Trump can claim his victory only because the Kurds did the fighting with US support.  But there are thousands of ISIS fighters still in Syria who will now quickly be reconstituted as an organized force with the Kurds wiped out by the Turks.  Maybe that’s what Erdogan wants.  It’s not what POTUS wants, but a lot of Kurds are going to be slaughtered, and their blood will be on his hands.

Sorry to be so hard on the Big Guy.  Everyone makes mistakes, this one’s a doozy, let’s hope he figures it out fast.  On the other hand, he struck a blow for freedom in Tibet Wednesday (12/19), by signing into law the Reciprocal Access to Tibet Act of 2018, hailed by Tibetans around the world.  It guarantees the same access of US journalists, diplomats, and tourists to Chinese-Occupied Tibet as the US gives to those of China.

Of course the Chicoms are hopping mad.  POTUS doesn’t care, he signed it anyway.

Another big win for the President was his signing today (12/21), right in the midst of the shutdown fight, an amazingly bipartisan prison reform bill called The First Step Act.  There’s a lot to it that’s controversial, but Trump has managed to do something about the US having the world’s largest prison population in real numbers and per capita.  Something is morally wrong about this, deeply so.

Further, this will enormously improve Trump’s standing with Black America.  Very good news for him in 2020.

This just in this afternoon (12/21):  Supreme Court Justice Ruth Bader Ginsburg, 85, undergoes lung procedure to remove cancerous growth. Note the hospital reports: “no further treatment is planned.” Amy Coney Barrett, here we come.  By this time next year if not months before, we’ll have a 6-3 conservative SCOTUS.

Okay, still more winning.  This has got to be the headline of the week:  Federal Judge Rules Obamacare Unconstitutional.  Not just the “individual mandate,” but in entirety, the whole ball of fascist wax.  By the time the ruling – which should take effect immediately as the Dems demand for every lower ruling that goes their way – gets to SCOTUS we’ll be at 6-3 and easily upheld.  Zerocare adios.

Qatar exports 77 million tons of LNG a year or 3.5 trillion cubic feet (tcf).  As you read in HFR 12/07/18 two weeks ago, just the latest discovery of the Wolfcamp Shale/Bone Spring Formation in Texas has 281 tcf, over 100 years of Qatar’s exports – this one deposit alone leaves Qatar in the dust.

If you can’t beat ‘em, join ‘em.  Invest your billions where the real action is.  This is known as MAGA.

Time for the HFR Hero of the Week.

Six years ago, a kid in the 8th grade gave a YouTube presentation on how a new combination of quantum mechanics and imaginary numbers could fundamentally change our understanding of Nature.  By the time he was a junior in high school, he published his first book on theoretical physics: Physics Reforged.  As a freshman at Columbia, he published his second: Time and the Muliverse.

A few days ago, now a 19 year-old sophomore, he learned that being a super-genius doesn’t mean anything to snowflakes if you’re politically incorrect.  Finally he lost it with the harassment, declaring that Western Civilization was created by white people and was the greatest thing that ever happened to humanity, that he was proud of being white, that he didn’t hate anyone but he was proud of who he was.

Yes, he lost it and ranted, tired of being called a “white supremacist,” his 54-second rant was cell-phoned, went viral, now he’s getting death threats and the snowflake fascists want him expelled.  His name is Julian von Abele.  Here’s the viral video.

He refuses to back down or apologize.  He now has a Twitter feed which you should follow: https://twitter.com/VonAbele.  A sample:

Surely, Julian should be a hero to all of us.

Then there is a young man married to a cover-girl blonde.  They have the two cutest kids you’ve ever seen.  He grew up in Hawaii surfing.  Here’s a picture of him and his wife catching a wave. 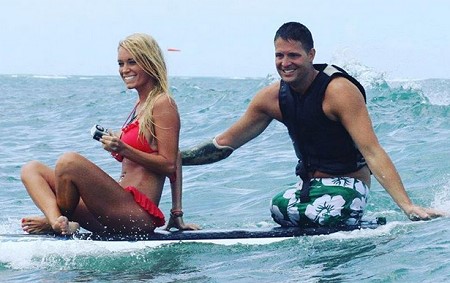 Yes, he’s a triple-amputee, having lost his lower right arm and both legs in a rocket attack on his Air Force base in Iraq in 2014.  His name is Brian Kolfage.

On Sunday (12/16), Brian founded a GoFundMe page to raise private donations to build the Wall: https://www.gofundme.com/thetrumpwall.  It hasn’t been up for five complete days and he’s already raised over $13 million.  His goal is $1 billion – for starters.  His website is, We The People Will Fund The Wall, https://wefundthewall.com/ .

Surely, Brian should be a hero to all of us.

Then there’s a fellow from Houston, Texas.  Got a law degree, went into private practice, became an Assistant US Attorney for the Justice Dept. for several years, and in 2007 was nominated to be a federal judge for the US District Court for Northern Texas, where he’s been since.  His name is Reed O’Connor.

Yes, Judge O’Connor is in the headline: Federal Judge in Texas Strikes Down Obamacare.

Surely, he should be a hero to all of us.

Frankly, all of them should the HFR Heroes of the Week.  We owe all of them profound gratitude.

Have a wonderfully Merry Christmas to you all.