What is this horrific video?  It is “what the face of real anger and desperation in the face of a government that is equal parts corrupt and inept looks like.”  This took place in Buenos Aires, Argentina one week ago (12/04).  The author continues:

“It is the fundamental problem of rule through force that eventually leads to these regrettable outcomes. No one wants to see policemen, presumably decent men with the right motivations to maintain societal order, stoned in public.

And the lesson here is for all of these would-be tyrants currently laughing about winning a fraudulent election in the U.S. through changing the rules is that they will face this same moment as these cops did very soon.”

But not with rocks – which is all the Argentines have.  You know full well what tens of millions of Americans have.  At least five Justices must know this themselves – and that the outcome of their decision on Texas v Pennsylvania is binary: ballots or bullets.  POTUS understands:

The full article from where the video clip and quotes above are from is Opposition Builds To Great Reset In Argentina, Who’s Next? – one the many invaluable Skye’s Links this week.

When he and I talked early this morning, we both laughed at how truly pathetic the responses to the Texas lawsuit  have been.  Pennsylvania’s was typical name-calling, “frivolous,” “bogus,” and “seditious.”

This elicited nothing but peals of ridicule by legal experts all over, such as constitutional law professor (and Democrat) Jonathan Turley:

Because the Enemedia provides such a shield of protection, Dem fascisti believe all the rebuttal they need for any accusation against them is simply to say, “It’s a lie, it’s been debunked,” and that’s that, no argument with facts necessary.

So SCOTUS now has a very simple question of constitutional law vs. schoolchild taunts.  Further, Texas’ case will be defended by the best there is, Ted Cruz, who will obliterate the defendants.  And who will provide an easy path to remedy.

No fraud needs to be claimed or proven.  A SCOTUS majority simply has to remand to the state legislatures of Georgia, Michigan, Pennsylvania, and Wisconsin that it is their decision and theirs alone – not the governor nor courts – as to what Electors are chosen if any, by the clear instructions of the Constitution.

Most importantly, this SCOTUS remand would come with no recommendation of how they should vote as the Court has no authority to do so, only the legislatures do.  That’s the genius of the lawsuit – and the most likely outcome.

What will the legislatures do?  As a reminder, these four states have 62 Electoral Votes (PA 20, GA 16, MI 16, WI 10). They could be so angry at the Dems’ fraud and the torrent of Enemedia abuse upon them to appoint the Trump Elector slate.  POTUS now has 233, so would have to gain at least three to get to 270 or above.  One legislature might, three is unlikely.

More likely is that they’ll take the same easy remedy as the Court, and vote for no certification at all.

Again, the four state legislatures don’t have to mention much less prove fraud, just that as SCOTUS ruled the election was conducted unconstitutionally, they cannot certify any result of such an election.

So once more, the likeliest path, with neither of them reaching 270, leads to a Contested Election in the newly-sworn in House on January 6, which Trump would win 27-22.

And with that, all’s well that ends well on January 20, the nation and our freedom is saved, and Cadaver can go back to his basement.

A note on that Contested Election – which is also held by the new Senate for Vice-President.  Even if the two idiot commie Dems win in the Georgia runoffs on January 5 – which they won’t – they won’t be certified and sworn in a day later.  But even if they were, per impossible, that would bring the current 50R-48D to 50-50, with VP Pence voting for himself as the tie-breaker.  Trump-Pence second term.

Oh, and if BLM/Antifa decide to go berserk-o, POTUS knows Posse comitatus applies only to the Army (and Air Force), not the Navy thus the Marines.  As C-in-C, he can waive the Pentagon declaration it does, send in a Marine detachment to clean out them out anywhere.  Done and dusted.

But these loser crybullies are a minor problem.  POTUSv2 has far bigger infestations to disinfect.  The FBI is now a criminal organization, a willing accomplice to federal crimes of aiding/committing election fraud.

Recall the entire pretext for the Russia Collusion Hoax:  that Russian intel somehow hacked DNC computers and gave the contents to Wikileaks.

Recall this was impossible as the clock speeds of the email downloads show it was done on the inside, not via an external internet connection – i.e. by Seth Rich, the DNC’s computer analyst, infuriated how John Podesta at the DNC was rigging the primaries for Hillary against Bernie.  Podesta hired thugs to murder him and invented the Russia myth as a coverup.

Turns out the crooked FBI has been sitting on the evidence of this since July 2016.

“The institutions of our government — the Department of Justice and certainly, the FBI and other elements like the intelligence community just basically (have) an anti-American sense inside.”

Yes, the Deep State is at root anti-American – which is why its entire senior echelon must be rooted out.  Who will POTUSv2 choose to do so?

Smart money is on Rudy Giuliani to replace the hapless Bill Barr at DOJ, Michael Flynn to replace the execrable Chris Wray at the FBI, Ric Grennell to replace the worthless Gina Haspel at Langley, while John Ratcliffe will stay as DNI (Director of National Intelligence).  They are ones to clean out the Deeps State’s Augean Stables.

Rudy running DOJ will go after the Biden Crime Family with hammer and tongs.  You know of course about the DOJ grand jury investigating Hunter’s crimes – that Barr “suspended so as not to affect the election”: AG Barr Concealed Hunter Biden Probes From Public During Election.

The New York Post is reporting this morning (12/11) that Barr Has Been Hiding Two Federal Probes of Hunter Biden for Months.

Now we learn that Cadaver’s brother James is also under federal investigation.

Rudy won’t be satisfied until the entire family including Cadaver himself is found guilty and faces imprisonment.  At that point, POTUSv2 may well pardon the “Big Guy” himself as an act of mercy as he’s collapsing from dementia and hasn’t got long to last anyway.

Then there’s what wags are calling the Poon Fang Scandal, informatively and entertainingly described by Lloyd Billingsley yesterday (12/10). It’s a must-read. Or as Senator Ted Crus puts it:

Once Rudy focuses his attention on scumbag Eric Swalwell, being kicked out of Congress will be the very least of the traitor’s worries.

And with Bela Pelosi so staunchly defending Swalwell, not having “any concern” of his remaining in Congress and on the Intel Committee, Rudy might well be curious as to her being an accomplice to his treason.  And Pencil Neck Schiff as well.

Incidentally, you might be curious as to why Hunter’s sleaze and grand jury investigation is suddenly being headlined by the Enemedia, when they so obsessively suppressed it before.

It’s because his father has served his purpose as front man for the Dems to cheat their way to the White House.  Now that they think they’ve got it, they think it’s safe to throw him under the bus – which they always were planning to do – so the Commie Whore can replace him.

Or maybe they had to jump the gun as everyone on the Hill is saying Hunter’s arrest is imminent so they had to get ahead of the story.  Stay tuned.

This afternoon (12/11), the Senate passed the giant Defense Appropriations Bill, as the House did earlier. POTUS has vowed to veto it as it does not contain repeal of Section 230 protection for Big Social Media.  Let’s hope he does and that it won’t be overridden.  This cover of the NY Post on Saturday (12/05) is an example why: 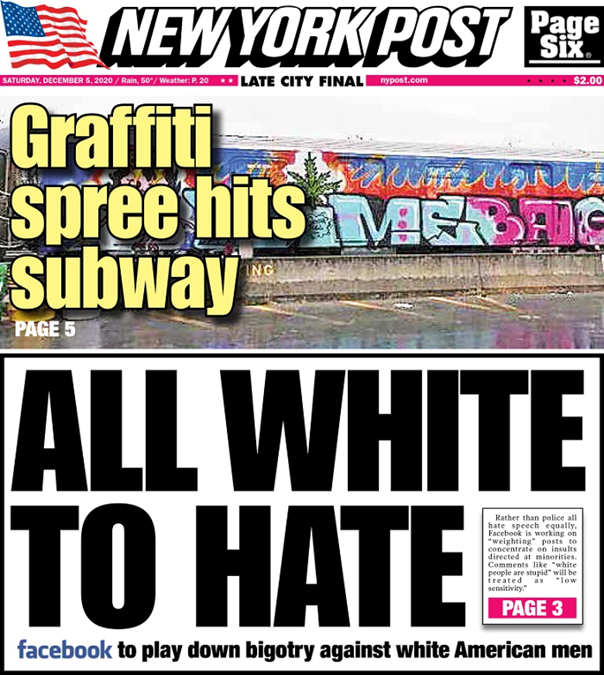 As TTP has been explaining for years, America’s worst racial problem is anti-white racism – perpetrated most by self-hating libtard whites themselves, what I call auto-racism.

“Facebook has tipped its hand. Those fine promises of neutrality and unbiased moderation are now yesterday’s news. Now, Facebook is openly embracing critical race theory, which rejects the principle of colorblind rule and law enforcement in favor of open discrimination.”

It’s not just FB of course.  Twitter’s libtard bias is off the charts.  Now on Wednesday (12/09): Google, YouTube, Announce They Will Block Content That Challenges 2020 Election Result.

“After the Marxist-left spent four years challenging the result of the 2016 election, forming the ‘resistanc’ and calling Donald Trump an illegitimate president; and after Big Tech supported, allowed and amplified that message on all media platforms; Big Tech’s largest control agent, Google (via YouTube), now steps-in to say they will not permit content that challenges the outcome of a demonstrably fraudulent 2020 election.”

This effort is already underway this week (12/09) with the FTC joined by 48 states suing to break up Facebook.  Facebook is doomed. Two more to go.

Too many Heroes of the Week to single out one.  There’s Texas Attorney General Ken Paxton who launched the suit that may save America.

There are the Sheriffs of Los Angeles, Orange, Riverside, and San Bernardino Counties refusing to enforce their state’s fascist monster of a governor and his lockdowns. As Riverside County Sheriff Chad Bianco explains: “My department won’t be blackmailed, bullied, or used as muscle to enforce dictatorial lockdowns.”

Then there’s Bob Unanue.  As the CEO of Goya Foods, he just named Congressidiot Occasional-Cortex as Employee of the Month – because her boycott of Goya products resulted in such soaring sales.  He no doubt wins the America’s Funniest CEO of the Month Award.

The momentum is building towards a game-changing SCOTUS decision in favor of freedom, the Constitution, and rule of law.

Meanwhile, last night (12/10), Hanukkah was publicly celebrated in Dubai UAE for the first time ever, while Morocco became the latest Islamic country to normalize relations with Israel.

This, thanks to the world’s greatest peacemaker, President Donald Trump. As Christ said in the Sermon on the Mount, Mathew 5:9:

Blessed are the peacemakers: for they shall be called the children of God

America is blessed to have such a President.  May we be continued to be blessed for another four years.