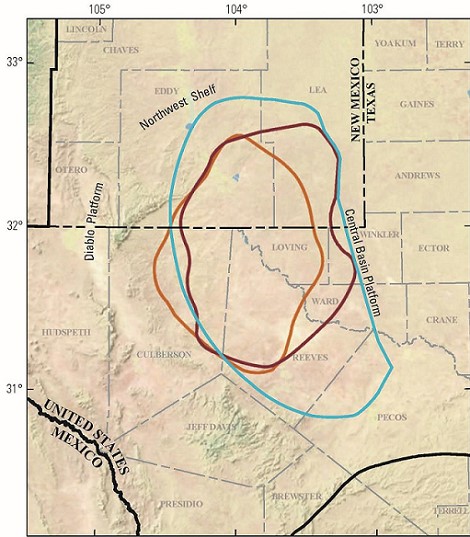 What might this be?  As it’s right close to the Tex-Mex border, you might think it’s something to do with illegals invading across it – proposed ICE Catch & Detain areas, maybe.  But no.

It’s a Christmas Present to America from the entrepreneurial heroes of America’s fracking industry and the US Geological Survey (USGS).

That large – 49 years of oil alone.  No wonder Interior Secretary Ray Zinke’s reaction to the announcement was :  “Christmas came a few weeks early this year.”

The assessment is made possible by the continuing technological advances by America’s frackers.  Thanks to them, the US is now one of the world’s major oil & gas exporters to other countries.  It wasn’t that long ago when America’s dependence on massive imports was a major national security concern.

Now, the US is on the way, as Sec. Zinke says, to export dominance in world energy markets.  And here’s a secret (not for long but you heard it in the HFR first).

First, you need to read why the shipping container is considered one of the most influential inventions of the 20th century, right up there with the airplane and microchip:  Container Shipping and the Rise of the Global Economy.

Second, consider how popular natural gas is as a clean-burning, inexpensive, and abundant energy source – except that it’s so expensive to ship, especially overseas.  That’s because it requires enormously expensive supertankers capable of supercooling the gas at -250F, liquefying it to 1/600th the volume as LNG (liquefied natural gas).

Further, you also need costly infrastructure at special LNG port facilities to re-gassify the LNG, then expensive pipelines to carry the gas to end users.

Put these two factors together, and you get the next-big-thing to revolutionize energy markets and the global economy dependent upon them.  Yes, the containerization of LNG or “Gas In A Box.”

It’s the future of gas delivery – LNG in a 40-ft container and shipped by freighter, rail or truck directly to a small business or power plant.  LNGTainer is one of many companies manufacturing such containers.  It will result in an explosion of energy markets for US natural gas globally.

What a great Christmas Present for all of us – and a lump of coal in Vlad Putin’s stocking.

You won’t find this on his Fox show Tucker Carlson Tonight, where he’s bashing Democrats for destroying democracy and such, but on Tuesday (12/04), he gave an interview to Die Weltwoche, Switzerland’s leading German-language newspaper, that was entitled (in the English edition): Tucker Carlson: “Trump Is Not Capable.”

The excerpts that will raise your eyebrows:

“Q: Has Trump kept his promises? Has he achieved his goals?

TC: ‘No. His chief promises were that he would build the wall, de-fund planned parenthood, and repeal Obamacare, and he hasn’t done any of those things… I don’t think he’s capable.’

Q: Has he really achieved nothing?

TC:  ‘Not much. Not much. Much less than he should have. I’ve come to believe he’s not capable of it.’

Q: [In your book, Ship of Fools] you write nostalgically about the old liberals – why?

TC: ‘I find myself in deep sympathy with a lot of the aims of 1970s liberals. They were suspicious of market capitalism. People get crushed beneath its wheels.  Capitalism drives change, innovation change, the old ways give way to new ways of doing things, and in the process of change the weak get hurt always. What’s changed [today] is that nobody is standing up on behalf of the people who are being crushed by the change.’

Q:  Is that really so? Look at the grassroots movement on the Left: Alexandra Ocasio-Cortez and her socialist group.

I may never think of Tucker in the same way again after this – you may not either.  The amount of positive change President Trump has achieved for our country is monumental.  Reducing Obama’s suffocating rules and restrictions on fracking, which make the Christmas present above possible, is just one of many.

And to praise the Bug-Eyed Brainless Bolshevik as “the future” is as stupid as anything she’s said herself.  Here’s one of her latest, by the way: 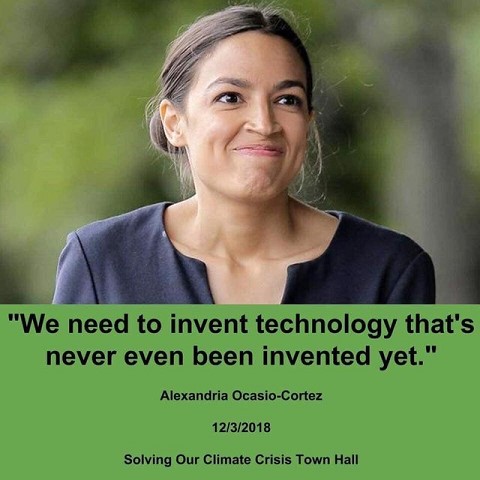 She may be Tucker’s future, but sure isn’t ours.

Carlson has the temerity to criticize the President and not the utterly worthless House with the largest Republican majority since the 1920s that can’t fund the Wall or defund Planned Parenthood, or a Pub majority Senate that can’t get rid of Obamacare (not a word about Songbird McCain blocking it out of malicious spite towards Trump, Tucker?)

It’s the worthlessness of Speaker Paul Ryan that is most infuriating.  An example came on Wednesday (12/05) – The Hill reporting FBI Email Chain Damning Evidence of FISA Abuses.

“Just before Thanksgiving, House Republicans amended the list of documents they’d like President Trump to declassify in the Russia investigation. With little fanfare or explanation, the lawmakers, led by House Intelligence Committee Chairman Devin Nunes (R-Calif.), added a string of emails between the FBI and the Department of Justice (DOJ) to their wish list.

Sources tell me the targeted documents may provide the most damning evidence to date of potential abuses of the Foreign Intelligence Surveillance Act (FISA), evidence that has been kept from the majority of members of Congress for more than two years.”

Ryan has kept this a secret for over two years?  He became Speaker in October 2015.  Thank heavens he won’t be on January 3rd.

It’s just barely possible Ryan could redeem himself by getting House passage of Sens. Jim Inhofe and Ted Cruz’s The Wall Act, fully funding the Wall at $25 billion and so much else.  Not much time, this should have been done a long time ago.

There will likely be legitimate suspicion from the Right regarding POTUS’ pick of Bushie former AG as his:  Bill Barr.

But when you see the “red flags” the Fascist Media are raising against him, any suspicions we may have should be allayed: 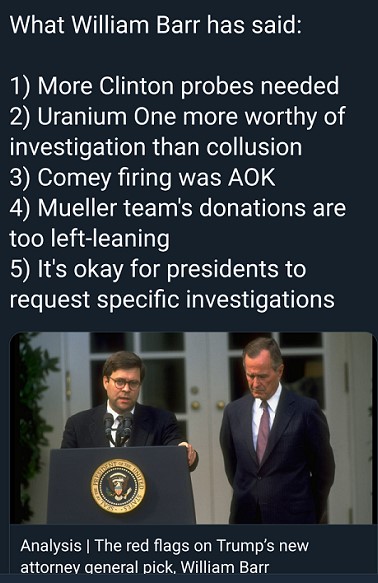 Let’s just hope an AG Barr will actually do something as opposed to do-nothing AG Sessions.

In addition, it’s now known that the CFO of the Clinton Foundation, Andrew Kessel, is spilling the beans to investigators, who have complied an additional 6,000 pages detailing Clinton corruption.

The trouble is, Sessions knew about this for over a year and did nothing.  We expect Barr to prosecute.

One reason Obama shut Cassandra down was to protect the Awan brothers involved in Moslem terrorist money laundering and their connection with Congresswoman Debbie Wasserman-Schultz.   Debbie Dimwit may not be sleeping well tonight as she realizes she’s Cassandra fair game now.

Here’s a POTUS appointment we can all smile over.

Coming soon:  The world’s most beautiful – and smartest – UN Ambassador. 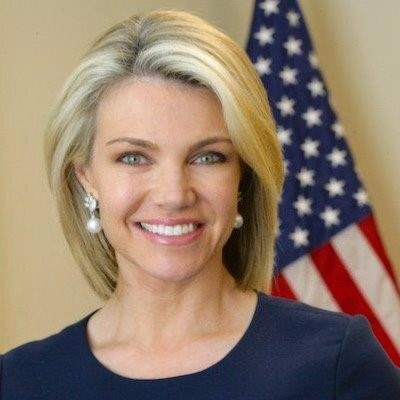 Heather sure is nice to look at – but how about this guy? 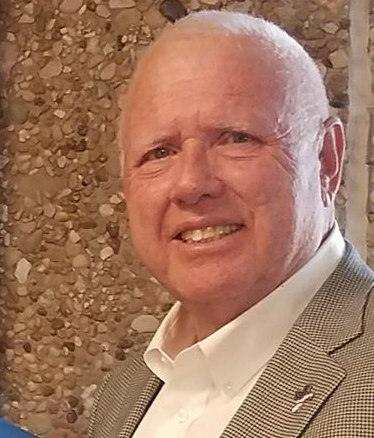 He’s Ray Myers, a Texas GOP Committeeman who’s set the Fascist Media’s hair on fire with his Facebook post on Tuesday (12/04) declaring:  “Damn Right, I’m a WHITE NATIONALIST and very Proud of it!”

The libtards at the Texas Observer tried to get him to apologize and Ray would have none of it, telling them:

“I am Anglo and I’m very proud of it, just like black people and brown people are proud of their race. I am a patriot. I am very proud of my country. And white nationalist, all that means is America first. That’s exactly what that means. That’s where the president’s at. That’s where I’m at and that’s where every solid patriotic American is. It doesn’t have anything to do with race or anything else.”

Good for you, Ray.  Speaking truth to Libtard Fascist Evil, having the moxie to do so.  Ray Myers is the HFR Hero of the Week.

Say, did you see that note POTUS passed to PIAPS during the Bush 41 funeral? 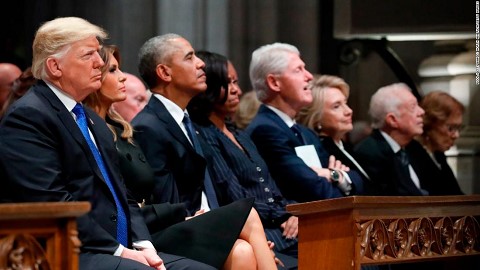 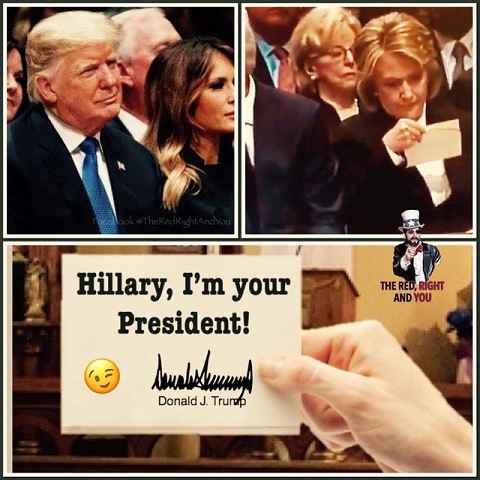 In case you haven’t noticed, there’s a revolution going on in France.  And it’s not being done by kids, but bourgeois middle-class folks really sick and tired of their elitist/globalist/let-African-Moslems-come-by-the-millions-and destroy-our-culture rulers.

They call themselves Gilets Jaunes – Yellow Jackets, after the yellow safety vests French drivers must have in their car for roadside emergencies.  Their protests have been growing larger and more violent.  Tomorrow (12/08) there’s going to be hell to pay on the streets of Paris and in cities around the country.

Now that’s a revolution.  France’s Soyboy President Macron may have to flee the country for his life.

Where are our Yellow Jackets to run Antifa thugs, Fascist Media Fake Newsers, election-stealing Fascicrats, and illegal alien criminals out of our country fleeing for their lives?  We won’t get our country back until that happens.

Ever hear of The Naked Cowboy – or perhaps seen him perform at 45th and Broadway in Times Square?  Recently, a news crew from Australia asked him what he thought of President Trump.  We’ll close with his response.  You can also support him his website, https://www.nakedcowboy.com.  Enjoy…